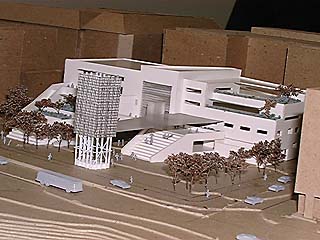 The design for Austin's new City Hall, approved at last Thursday's City Council meeting, was called everything from "uninspired" and "trendy" to "a blemish on Austin's otherwise beautiful skyline."

To hear the talk around City Hall -- the current one -- you'd think there was something bad about "design by committee." What's being attempted with City Hall -- the new one -- is something worse: design by e-mail list. "At least with a committee," jokes project officer Nathan Schneider, "you can make eye contact."

The City Council appeared poised for full-body contact last week, when it gave marquee architect Antoine Predock and his local partners the go-ahead to refine their concepts for Austin's $37 million seat-of-government-to-be. Reviews of Predock's vision, for a stripped-down modern office box fronted by an elaborate geometric plaza facing Town Lake, have been, as they say, mixed.

Well, check that. About the nicest things said in public about the Predock design were right here in these pages, where we complimented the New Mexico design superstar for realizing that, to really respond to "the nature and character of Austin," our new City Hall should be a performance space, which is the most logical use for the plaza as designed. But let it not be said that Austinites are easily cowed by brand-name architectural reputations.

Before the Feb. 1 vote, City Council offices were swamped with e-mail -- ably coordinated by Texas Monthly Publisher Mike Levy, a virtuoso of the medium -- from people, many of them smart and respectable, who implored Watson and Company to withhold their blessing from Predock's concept. Among their opinions: "uninspired," "trendy," "uninteresting and cold," "brutal," "reminiscent of the Brady Bunch House," "plain, boring, confusing, and not contemporary," "a blemish on Austin's otherwise beautiful skyline," "a design that will only please a few elitists," "obscene," "inane," "clumsy and sophomoric," "callous and anti-urban," and "an overexposed heat sink and a missed opportunity."

So there. Oh, and one more: "Too small, too ugly, and too typical of our city government at work. What's the bet that it comes in way over budget as well?" (To which Mayor Pro Tem Jackie Goodman responded, "I think he has us confused with the county.") The only real pro-Predock message aired in response was, basically, "Don't turn this into another Blanton" -- the UT art museum project debacle that has left some locals fearing that Austin will get a reputation for philistinism in urban design.

But a blitzkrieg of criticism for projects such as this, buffeted as they are by the city's own identity crisis, is also typical of Austin civic government at work. As was the lengthy dialogue at the Feb. 1 meeting, kicked off by a, as they say, "wide-ranging" discourse by Predock on what he was trying to say with the building.

Even though Predock conveyed genuine surprise at his firsthand immersion into Austin political culture -- total accountability, to everyone, all the time -- it was never really in doubt that the council would do what it was being asked to do. Which was, as has become a habit of the council in recent weeks, only a baby step toward an endgame that, the council assures us, will not be as ignominious as detractors suggest. As Predock, Schneider, and local team leader Juan Cotera -- chair of the city's Design Commission -- all noted, the council is free to make changes to the design at any time.

And, as has become her habit in recent weeks, Council Member Beverly Griffith smelled discontent and made herself its exponent. Even though she made a friendly amendment to the original motion -- one that made absolutely clear that Predock and his team had to come back before the council in March for another go-ahead, after responding to the public's concerns about the design -- Griffith ended up voting against it after she realized that the council was actually being asked to vote to approve certain project specifics, not just kibitz.

These specifics included the size of 115,000 square feet, the general massing within the parcel, the distribution of city functions within the building, and the vehicular entry and exit on Guadalupe and Lavaca Streets. "We don't want to spend another six months to find out that the council really wants to be on the fourth floor, not the second floor," said Schneider.

And, try as Griffith did to paint her colleagues and staff as unresponsive to the clearly expressed objections of the people -- her aide Jeff Jack passed out copies of the Levy e-mail archive as if they were candy -- the problem is that the city is stuck with the big issues, like the size and the south-facing plaza. There are several reasons. First, the city can't afford a bigger building and may not want one anyway; design estimates, from previous City Hall go-rounds, of a 500,000-square-foot, $100 million building, are simply inoperative.

"The bottom line is that the city can't afford more than 100,000 square feet," says Schneider, noting that, in the 20-plus years Austin has contemplated building a city hall on the lakefront site, the council and citizens have been "determined not to float a bond issue to build it ... [And] I think this is a good scenario, because in 10 years we won't be worried about what to do with this 500,000-square-foot building. The people at that location will always be there regardless of how that government changes."

We can afford the building Predock is designing because of the city's deal with Computer Sciences Corporation to use most of what historically was "the City Hall site." As is now widely known, the terms of the city's master agreement with CSC dictate other limitations citizens now find objectionable, and not without reason -- the massing and especially the southern exposure of the plaza on the hellishly hot shores of Town Lake, surrounded on three sides by major Austin arterials.

"When we hired Predock, we knew we had restrictions on the block," Schneider says. "And we told Antoine to present something to us that kept in mind the requirements of the CSC master agreement, but don't let that hinder you a lot." As presented so far, Predock's response seems to be to focus his creative energies on the plaza and let the actual building take care of itself, which is why it's been variously compared to a highway-strip bank and a parking garage.

For months upon months, some local design professionals have felt the limitations imposed by the CSC master agreement doomed the City Hall project to missed-opportunity status. And so there's been a steady drum beat to reopen negotiations with CSC on that agreement; but Mayor Watson and city staff -- particularly Deputy City Manager Toby Futrell -- have no desire to do so. Neither does CSC, apparently, even though the economic downturn has led the software giant to reconsider how quickly it builds its three buildings surrounding City Hall, thus leaving an opening in the mind of detractors.

"This is a company with 60,000 employees around the world that's already made a huge investment in infrastructure in downtown Austin," says CSC spokesman Howard Falkenberg. "So [it's] a commitment that's not arrived at lightly and rethought every month. It doesn't mean any disrespect to the citizenry, but the master agreement was carefully thought through by all parties." In the view of many citizens, Falkenberg may be flattering the city.