Markers That Still Point to Vanished Places in Austin's Past

The genesis of "Lost Austin" came from a sidewalk on Guadalupe Street. In the 4400 block, just north of the Movie Store and directly in front of an office building that was constructed in the mid-Eighties, is a memorial scrawled in the cement: "R.I.P. CACTUS COURTS '84," with a small tombstone drawn beside it. A couple of years ago, as I was walking to a production at Hyde Park Theatre, my eyes chanced upon this message, and it had an odd effect on me. I found it rather haunting and even a bit moving. Here had been this bit of Austin's past -- not something that had mattered to the whole city or even a large part of it, a piece of the city that could have easily slipped off the map into obscurity when it was overtaken by progress -- and someone had felt strongly enough about it to find a way to commemorate it, to carve its name in a place that would note for a long time that this place had existed; it was here. Seeing the date, I became conscious that I was looking at it some 15 years after it had been written, and I could feel that span of time between the act that had produced it and my witness of it, and the fact that it had endured for even that long touched me somehow. Moreover, even across that gulf of years, I could feel something of the writer's feeling, whatever impulse or passion had prompted the creation of this marker. People write in wet cement all the time, but it's usually innocuous stuff; this had the feel of something that mattered to somebody. It was a message not meant for me specifically but for anyone who might pass this way, at whatever distance from the day it was written. It was like finding a message in a bottle, washed up on the shore of the vast sea of time.

By itself, that sidewalk tribute was enough to keep it lingering in my mind, but then, like some key to the past, it unlocked doors to my own memories of that year, of the way Austin looked then, the way Guadalupe looked then. Did I remember the Cactus Courts? What else could I recall from that neighborhood at that time? What else from those days was lost but hadn't had someone to record where it had stood? It started me thinking about the ways parts of a city come and go, how much vanishes from year to year, generation to generation, as a city evolves, and those who come after it vanishes never know what was there, unless someone takes the trouble to leave a marker.

Eventually, this developed into the idea of the Chronicle creating markers for some of those vanished parts of the city through a special issue focusing on the forgotten history of Austin. All the editors at the paper discussed the idea, and over the course of many, many months, we and a team of interested writers and artists crafted this issue we've titled "Lost Austin."

Along the way, though, as we were busy creating our journalistic signposts, I kept an eye out for other, more literal markers that still pointed to parts of Austin that had disappeared. I didn't find any more homemade testimonials like the one for the Cactus Courts, but I did find others, quite a few others, some of them prominent to the point of being city landmarks, some of them barely noticeable and all but lost themselves. In the images of them on the following pages, photographer Kenny Braun has captured the sense of limbo about these signs, the way they inhabit both the past and the present.

Probably the most identifiable of these markers is the Grove Drugs sign (209 E. Sixth). The 1.5-ton vertical neon sign that hangs off the building with the copper bay windows has become one of the visual anchors of East Sixth, an area notorious for the rapid turnover of businesses and changes in signage. It also identifies one of the businesses about which it's easiest to find information. Grove Drugs dates back to 1933, when Vernon Grove bought the building and business from his former employers, the Morley brothers, who had operated a drugstore in the location for decades. (For a few months in 1884, the Morleys even had William Sydney Porter -- O. Henry -- manning the pharmacy at night and sleeping in a makeshift bedroom on the building's second floor.) The sign has lasted a good many years and will likely last a good many more, as it was recently given a $4,000 reconditioning by Classical Glass of Austin.

Other signs mark businesses of long standing that have faded away in just the past few years, businesses with which Austinites of fairly recent vintage may be familiar. Joseph's Men's Shop was a staple on Congress Avenue for decades, as was the mural advertising it on the side of the Joseph building (200 block of Congress). The shop closed last year -- to be replaced by a James Coney Island -- but the memory of it, the haberdashery of the LBJ era, lives on, especially with the restoration job recently conducted on the second-story mural. Similarly, the Crumley's Grocery (10730 S. I-35) was a familiar sight to anyone who traveled south on I-35 from the late Sixties through the mid-Nineties: It was the country store festooned with 16,000 Christmas lights that provided a beacon of whimsy on that largely featureless stretch of interstate. The building itself was demolished when the store was sold, but the sign keeps a lonely vigil by the highway.

You have to go back further to recall the businesses identified by some of these signs. For instance, the Fajita Flats sign (512 W. 29th) in front of Ruby's Barbeque identifies a business that pre-dates the Nineties and may well extend all the way back to the early Eighties. I can remember eating there; I just can't remember when. The Cactus Courts (4300 block of Guadalupe) were certainly of that era, as the marker notes, but little other information about it has survived. Renfro's Drugs (2300 block of Guadalupe) goes back still further; its legacy is at least a couple of generations removed from this one, making it harder to learn more about it and giving its presence on the sidewalk near UT an air of mystery.

Sometimes, though, that's precisely what's attractive about these markers to vanished places. You don't know what they're for, what time they're from, and you don't know whom to ask to get that information. They're strays, separated from their masters, wandering loose in time, and they have that forlorn appeal that such strays have. That was the feeling I got when I spied a bit of tile in the 1500 block of South Congress. I'd passed it I don't know how many times for how many years and never seen it. Then, one day, I'm walking by Allens Boots and I'm looking down, and there on the ground in what was once a doorway was the word "bakery" in blue tile on a white tile background. Discovering it in such familiar surroundings was a little disorienting, and it made me look around, as if I needed to make sure I was really where I thought I was. A bakery? Here? When was this?, I wondered. It raised all kinds of questions in my mind and I told myself that I needed to find out what its story was, but then my attempts to find out more about it were half-hearted. I think a part of me didn't really want to know. It was a mystery, a secret of the past, a graveyard marker for someone I would never know. And sometimes that's enough. 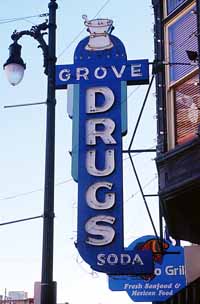 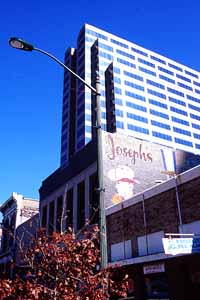 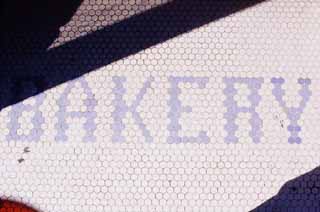 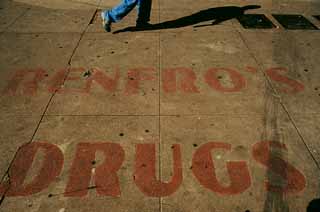 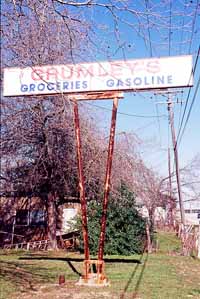 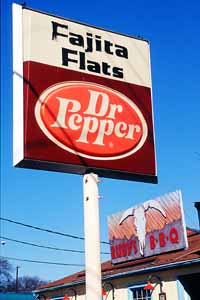 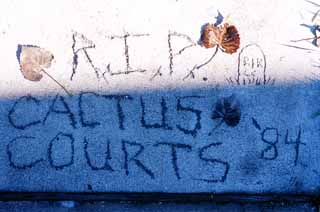