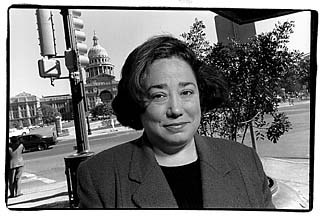 Lobbying for the rights of gays and lesbians is not always an easy or pleasant business, but for almost a decade it's the only line of work Dianne Hardy-Garcia has known. As the executive director of the Lesbian/Gay Rights Lobby of Texas (LGRL) for eight years, Hardy-Garcia has served nearly twice as long as any of her predecessors, and even she's amazed at her own staying power.

"Civil rights laws never happen rapidly," she said. "You just have to have the gumption to come back and keep fighting." This legislative session will mark the fourth for Hardy-Garcia, 35, although she very nearly didn't make it back at all. Last year, she considered quitting her lobbying post and, along with it, the long hours and the seeming futility of trying to pass the biannual hate crimes bill, which in 1999 flamed out in a Senate committee after sailing miraculously through the House. In weighing her options, Hardy-Garcia sought the counsel of her friends and colleagues and of those legislators she considers allies. Their feedback was unanimous: Stay and fight.

Late last week, one day after her friend and mentor, Houston Rep. Senfronia Thompson, filed a hate crimes bill as a companion to Rodney Ellis' bill in the Senate, Hardy-Garcia's voice sounded more energized than it had in months. It had been a roller coaster first week at the Capitol, but had ended on an optimistic note. It began with the Houston Chronicle quoting Gov. Rick Perry as saying he would oppose the hate crimes legislation, which flabbergasted the bill's legislative supporters, dozens of whom had signed on to Thompson's bill. The next day Perry's spokeswoman said the paper misinterpreted his remarks, but his initial statement, whether accurate or not, forced a private meeting between the governor and Thompson, Ellis, and Sen. Royce West, D-Dallas, a co-sponsor of the Senate bill.

Perry had requested the meeting, Thompson said, adding that it was friendly and without hostility. "We did not discuss the essence of the bill, but he wanted us to know that he had been misquoted and that he wasn't going to interfere with the bill," Thompson said. "He said he would take a wait-and-see position, but I'm hopeful that we can get enough support from both Democrats and Republicans that will make [Perry] and his party comfortable with the bill. If we can protect chickens, pigs, and cows," Thompson said of state legislation already in place to protect livestock, "then surely we can protect human beings."

Like Thompson, Hardy-Garcia believes Perry won't try to circumvent the bill's passage, as ex-Gov. George W. Bush did in the last session. "The thing about this kind of work is that for every devastating low there is an incredible high," Hardy-Garcia observed. "It was heartbreaking to see what happened to the bill in the Senate [in 1999], but the day that it passed out of the House was just absolutely incredible. That was a milestone," she said of the unprecedented vote. Even Warren Chisum, the Pampa Republican who sponsors anti-gay legislation every session, voted for the hate crimes measure.

That Chisum and others of his ilk signed off on the measure -- even with its inclusion of sexual orientation -- is monumental, say gay advocates, who measure their successes in the form of baby steps that, no matter how small, continue to fortify the mission of LGRL, a group founded in 1978 under the name of Human Rights Advocates. It was some years later before the organization hired its first full-time lobbyist, Bettie Naylor, now a veteran lobbyist and a familiar face at the Capitol. Naylor fought for the right of gay and lesbian students to organize and meet on state-funded university campuses. Glen Maxey, now an Austin state representative, succeeded Naylor in the late Eighties, and immediately began working to secure funding for AIDS and HIV services. Once Maxey decided to run for office, Laurie Eiserloh stepped in as his replacement. Eiserloh continued to work for AIDS funding and fought efforts to prevent HIV-positive dentists from practicing. "AIDS issues were still front and center back then," said Eiserloh, who served three years until her departure in 1993. She is now a trial lawyer with Bickerstaff, Heath, Smiley, Pollan, Kever & McDaniel, recognized as one of the more diverse law firms in town and one which also provides domestic partner benefits. "I remember being at a hearing one night and many of the people who were there to testify were in very ill health," Eiserloh recalled. "As the hour grew later, many of them went home. I was left there to testify, and I took out my address book and began reading off the names of friends of mine who had died of AIDS. It was such an extraordinary time." The last leg of Eiserloh's tenure was spent working toward the repeal of the age-old sodomy law, an effort still being fought today.

In the years since Hardy-Garcia took the reins, public sentiment and fundraising for the cause have greatly advanced. LGRL isn't rolling in dough, but it has enough to pay Hardy-Garcia a decent wage and fund a small office staff. Additionally, a 1999 Scripps Howard Texas Poll found that well over 70% of Texans support a hate crimes bill that includes the protection of gays and lesbians. The state's existing law -- the law that President-elect Bush touted in a debate with Al Gore -- doesn't specifically define which groups of people are protected from hate crimes. With Bush and his presidential campaign out of the way in Austin, Hardy-Garcia said, there is renewed hope for the bill's passage. But that's only part of LGRL's legislative agenda this session.

Here's a look at key gay/lesbian issues expected to wend their way through the Lege:

Hate Crimes: Without presidential politics running interference, as it did in the '99 session, the James Byrd Jr. Hate Crimes Act, House Bill 587 (Thompson, D-Houston) and Senate Bill 87 (Ellis, D-Houston), has its best chance of clearing the House and Senate this year, thanks in large measure to Ellis' increased political leverage as the newly appointed chairman of the powerful Senate Finance Committee. The bill would increase penalties for hate crimes based on race, religion, and sexual orientation; require counties to compile annual reports of hate crime prosecutions; and create a division within the attorney general's office to monitor hate crimes. The family of James Byrd Jr., the man who, in 1999, was dragged to death behind a pickup in East Texas, will return to the Capitol this year to advocate for passage of the bill named in Byrd's honor, Hardy-Garcia said.

Non-Discrimination in Education: Rep. Harryette Ehrhardt, D-Dallas, is expected to carry this bill to protect gay and lesbian students from discrimination in public schools and colleges.

Texas State Employment Non-Discrimination Act: Because Austin has more state employees than any other Texas city, it makes sense that Austin Reps. Dawnna Dukes and Glen Maxey would want to co-sponsor this bill (not yet filed at press time). The thinking behind this proposed legislation, which only addresses state employees, is that it's easier for the state to tell the state what to do, than to tell private employers how to run their businesses.

Adoption and Foster Care: The anti-gay forces are expected to dust off bills similar to those unsuccessfully carried by Chisum and Robert Talton, R-Pasadena, in 1999. LGRL expects Talton to take the lead on this front, although a curiously testy woman who answered the phone in Talton's office last week refused to confirm her boss' intent. "That legislation hasn't been drafted yet," she snapped, unwittingly signaling its probable resurrection. At any rate, LGRL leaders are heartened by a recent state district court ruling in Dallas dismissing most of a lawsuit brought by Rebecca Bledsoe, a Dallas County social worker who was demoted for removing a foster child from a lesbian couple's home. Bledsoe had also unsuccessfully sought an injunction against placing children in gay or lesbian-headed households.

Defense of Marriage Act: This makes Chisum's third attempt on the measure, filed as HB 496. The bill seeks to restrict nonexistent equal marriage rights for gays and lesbians. "Texas doesn't even allow gay marriages, and we're not proposing legislation that would," Hardy-Garcia said. "You can't ask legislators to fall on the sword for something that's impossible."

Anti-sodomy repeal: Maxey has already filed legislation on this score (HB 389), and Rep. Debra Danburg, D-Houston, is expected to follow suit, based in part on last summer's ruling by the 14th Court of Appeals (Danburg's district), which declared the state sodomy law unconstitutional. The ruling grew out of a case in which Harris County sheriff's deputies, acting on a false tip of an armed intruder, busted through the door of a home to find two men engaged in sex. The deputies arrested the pair on charges of "deviant homosexual behavior."

Buoyed by renewed support for passage of the hate crimes bill, the LGRL of Texas expects thousands to turn out this year for the biannual march on Austin, slated for March 18. "Bush's presidential bid played a huge role in killing the bill last session," LGRL executive director Hardy-Garcia said in a statement announcing the march. "Now our legislators can focus on what's best for Texas, and the polls clearly show that Texans want the law."

Several legislators, in addition to other supporters of the bill, are expected to speak at the march, which will end in a rally at the steps of the Capitol. LGRL-related events continue the following Monday, March 19, with Texas Gay Lobby Day at the Lege. For more details on the two-day event, call LGRL at 474-5475, or view the group's Web site at www.outtexas.org.