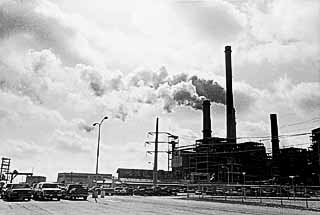 "Nothing," Lear told Cordelia, "will come of nothing." The doomed king was proclaiming his policy on paternal bequests, but he might well have been describing the practice of environmental protection in the state of Texas, which has relied on Nothing as a central principle for decades.

The current case in point is the "Voluntary Emissions Reduction Permit" program. The VERP air pollution control initiative was announced with great fanfare by then-Governor Bush in November of 1997, enacted as Senate Bill 766 by the Legislature in May of 1999, and was the subject of enthusiastic self-congratulation during the Bush presidential campaign. As required by the law, the VERP program was recently evaluated by its institutional promoters, the Texas Natural Resource Conservation Commission. According to the TNRCC's draft report to the Lege (due Jan. 15, available at www.tnrcc.state.tx.us), Voluntary Emissions Reduction Permits have thus far resulted in zero reductions in air pollution.

Since 1971, under the Texas Clean Air Act, more than a thousand industrial facilities have been entirely exempted from modern air pollution controls, and even from standard permitting procedures (and the public hearings these would entail), because, in the words of the TNRCC, "At the time, it was anticipated that these 'grandfathered' facilities would eventually need operational changes that would require them to obtain air permits, or they would shut down when their useful life came to an end." Such an optimistic outcome was "anticipated" because that was the solemn promise made by the industry lobby (primarily oil & gas and utility companies) and their legislative spear-carriers. Instead (perhaps they had their fingers crossed behind their backs) grandfathered facilities became instantly and increasingly more valuable: They could be run more cheaply than their "permitted" competitors, because with the help of the Lege their owners had effectively transferred the costs of emissions, pollution controls, health effects, and cleanup to the community at large. This is known as state capitalism: Socialize the costs, privatize the profits.

The grandfathered facilities (a more accurate term would be "unregulated") are not a handful of garage heaters or trash incinerators. By the TNRCC's current estimates, the "most significant" of these grandfathered sources "emit 895,662 tons of emissions per year and represent approximately 35% of the total air emissions in Texas." There is also good reason to believe the TNRCC current gross estimates are dramatically understated: They are based entirely on industry self-reporting, and in the past the agency has estimated that of the annual 4.5 million tons of air pollution from all sources, 1.6 million tons are "non-permitted" (i.e., unregulated either because they are grandfathered or covered not by permits but by small-source standard exemptions). A couple of years ago, when Neil Carman of the Sierra Club painstakingly analyzed the non-permitted category (a task the agency insisted was impossible), he found that the non-permitted emissions from more than 1,000 of the state's industrial plants (43% of the state's roughly 2,500 active plants) were 98% grandfathered -- that is, subject to no pollution controls or permitting procedures whatsoever, not even standard exemptions.

Another way to look at it is by comparison to vehicle emissions. When the governor was introducing his industrial "volunteers," he liked to point out that their promised reductions were the equivalent, say, of "the smog-forming pollutants of 500,000 vehicles." Unfortunately for the governor and for your health, the grandfathered facilities of just the top 30 companies (names like Texas Utilities, Exxon, Alcoa, Shell, Mobil, DuPont, Huntsman ...) annually emit the nitrogen oxide equivalent of roughly 13 million vehicles -- that is, of all the vehicles (passenger and commercial) on Texas roads. And that's just smog-forming NOx, of course. Also prevalent in the industrially disseminated soup Texans all have volunteered to breathe for the last 30 years are such highly toxic lagniappes as lead, mercury, sulfur dioxide, ethylene, toluene, ammonia, benzene, acetone, chloromethane, butadiene ... you name it, you breathe it, courtesy of industries which were invited by the governor's office to write the policy intended to control their own pollution. The result was VERP.

A few months ago, the TNRCC estimated that the current VERP volunteers under SB 766 would reduce grandfathered emissions by 3%. The Texas Air Crisis Campaign (a broad coalition of environmental groups across the state) examined the agency's very flexible estimates and announced instead that "a fair assessment of SB 766 would conclude that actual reductions that will be achieved are less than 1%" (report available at www.texascenter.org/aircrisis/index.htm). It now turns out that the environmentalists were far too generous -- the agency's own mandated report attributes zero reductions to the VERP program. The TNRCC report does point to other state and federal programs as having accomplished what it projects to be an eventual 22.9% reduction in the 896,000 tons of emissions the agency currently admits are grandfathered. TNRCC spokesman Patrick Crimmins acknowledged "some disappointment" that the VERP program hasn't yet shown better results, but he noted that the deadline for applications is September 2001, and that SB 7 (the utility deregulation law that mandated reductions in grandfathered power plant emissions, although the cost -- no surprise -- will be paid by consumers) and federally mandated urban ozone reduction plans will also affect grandfathered emissions. "It's too narrow a perspective to just focus on VERP," said Crimmins, "but we did expect we would get more actual reductions [under the program]."

SB 766 was authored and carried by Republican Rep. Ray Allen of Grand Prairie, who insisted at the time that "the good corporate citizens want to make a difference, and they want to choose how to make a difference in ways that are most efficient for their own corporations." Allen described environmentalist efforts to mandate emission reductions as "off-track" because corporate voluntarism would do a better job. "What we're trying to say is, we're willing to ignore the process," said Allen, "if you'll guarantee us the product. And the product is cleaner air." SB 766 turns out to be long on promises, completely lacking in guarantees, and pissant short on both process and product.

Allen also promised fellow legislators that should the voluntary program not succeed, he would return to the capitol to help "close the [grandfathered] loophole." (Environmentalists say they intend to hold Allen to his promise -- one bill has already been filed to end the grandfathered exemption: HB 356, sponsored by Zeb Zbranek, D-Winnie.) Allen was not available for comment on the draft VERP report, but his aide Scott Gilmore described it as "misleading and inaccurate, and we plan on discussing that with the agency." Gilmore insisted that it's premature to judge the program before the application deadline, and that other considerations (like the utility deregulation reductions and the "flexible permits" available under the program) mean the study misrepresents the program's true pollution-reduction benefits.

But in light of these new numbers, the environmental community's assessment of the VERP program seems a good deal closer to the truth. Tom Smith of Public Citizen, who had described the initial promises as so much "smoke and mirrors," said the TNRCC report confirmed that the program has been an "abysmal failure." (Smith contrasted the program with SB 7, which mandates reductions and a "date certain" when they must take effect.) Ramón Alvarez of Environmental Defense concluded, "The program is just not doing what they said it was going to do. It's a complete failure." Robin Schneider, executive director of the Texas Campaign for the Environment, is analyzing the specific permit data in the TNRCC report. She points out that not only have the promised reductions not materialized, but the "flexible permits" created by the program are in fact a step backwards, because they will simply allow the grandfathered emissions to proceed under other names, without being subject even to a public hearing process.

Schneider also raised a more frank possibility: for its sponsors, the voluntary program has in fact already achieved its real goals. "For the creators of the program," said Schneider, "it has been a wild success. The governor, the Legislature, the state environmental agency, and the companies that 'volunteered' could all claim they were doing something about this pollution.

"Of course," Schneider went on, "by the standards most people would use for an environmental program -- namely, has it cut harmful pollution? -- the voluntary program set up by SB 766 has been an utter failure ... It was designed as a public relations greenwash, and has proven to be one."

Presenting his program to the Legislature, TNRCC Commissioner Ralph Marquez argued that a voluntary program would work better than a mandatory one, adding that "we have waited 26 years, we can wait another year or so." That was nearly three years ago (and Marquez's memory was already a year short). Since he spoke to the House, several million more tons of completely unregulated toxic emissions have been deposited in Texas air, earth, and water, not to mention Texas lungs. John Hirschi, then a Democratic representative from Wichita Falls (now retired), commented at the time, "The citizens of Texas who have volunteered to breathe dirty air for the last 27 years thank grandfathered industry for volunteering a 2% reduction in their dirty air contribution." Yet even the promised 2% has proved, three years later, to be so much more hot air.

But from the perspective of Rep. Allen, Commissioner Marquez, the industry "volunteers" who wrote the program, and president-select George W. Bush, the TNRCC report only confirms that the ex-governor's voluntary emissions reduction plan has accomplished exactly what it was designed to do: Create a presidential campaign anti-pollution fanfare, full of sound and fury, but signifying -- Nothing.