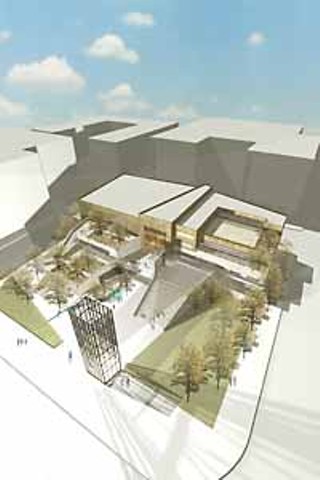 Architectural drawing of proposed City Hall from above, showing the planned CSC buildings overlooking from the rear

Let it not be said -- as we have said -- that Austin's new City Hall is an afterthought to the downtown waterfront's annexation by CSC. Oh, no. "In a public-private partnership with Computer Sciences Corp. that reflects the energy of a city leading the country into the 21st century," the city's Web site (www.ci.austin.tx.us) gushes, "Austin will finally have a City Hall worthy of its spirit and stature."

The "stature" part was probably nailed down last year, when the city tapped one of America's most celebrated architects, New Mexico-based Antoine Predock, to design the four-story, 115,000-square-foot, $37 million project.

There are supermarkets in Austin that are larger than our new City Hall; partly because of demands made by CSC, it's less than one-quarter the size of previous City Hall proposals. But size isn't everything, even though a few months ago, there were whispers that Predock and his Austin teammates at Cotera, Kolar, Negrete and Reed were trying to get the CSC deal revamped to free up design possibilities. Today, "I think it's all worked out fine," says Predock. "Every building project has constraints, and no matter what constraints are operative here, there's still a building, and a plaza, and the lake, which were the essential elements of this project. So I was able to design a building that was exactly as I envisioned it. It isn't just a box."

With the release of Predock's first preliminary designs -- first exposed to community comment Tuesday night, Jan. 2, and presented to the city's Downtown and Design Commissions the following night -- we can now decide whether the "spirit" of Austin will be reflected in the City Hall and its equally important (to Predock) public plaza facing Town Lake. Predock's building is, indeed, not a box. It is, you could say without insulting the architect, a bunch of boxes artfully arranged. 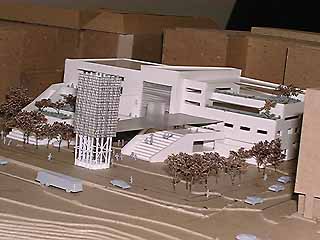 Architectural model of the proposed City Hall from the southeast, showing the concert stage, light tower, and amphitheater seating

That is itself a response to design junkies who were skittish that Predock -- whose reputation rests on buildings with organic forms that harmonize with the landscape -- would supply us with a swirly mound of adobe. Not that Predock's famed preoccupations are absent here -- the receding shelves mounting atop, and terraces extending from, the main volumes of the building "spill ... into the plaza," Predock says on the city Web site, "in a way that is analogous to geologic forces in the Hill Country ... that produce the limestone overhangs known as balcones."

The main point of this back-and-forth façade -- and of the main volumes' slight rotation from the center, like a bird's wings -- is to blur, or "mediate," the transition between City Hall, the plaza, and the lake, says Predock. "The building has arms reaching out toward the plaza to express and define different areas of activity, and the plaza is the foreground, becoming a functional extension of the buildings." This stands in contrast to the look-but-don't-touch fortresses that typify American institutional buildings, though the expanses of limestone, granite, and bronze do add weight to what could otherwise look like a playground with a City Hall hidden inside.

A planned watercourse would originate in the main public lobby, run across the plaza, and then spill through a limestone wall to "symbolically return to Town Lake." (It will actually be recirculated.) Said wall, along with some elevation changes and a mighty wide sidewalk, would buffer the plaza from the highway-speed traffic on Cesar Chavez Street. Direct entry to the lobby would be from the "back door" on Second Street, an elevation that, while not nearly as much fun as the plaza, is not bad, promising as it does some visual relief from the sturdy right angles of CSC.

Along with the metaphorical nods to stone and water is a much more concrete gesture toward the spirit of Austin -- a concert stage, at the Cesar Chavez edge of the plaza, surmounted by a light tower. (What looks on the rendering like a grand flight of stairs opposite the stage is actually amphitheater seating.) Acknowledging that the plaza's southern exposure toward the lake has its drawbacks, a "shade structure" of transparent mesh will cover the stage and seating, with ample tree plantings pulling shade duty elsewhere on the site.

This calls up its own set of associations. Unlike previous City Hall proposals, this building would not house the broad range of civic functions, and its dominant internal feature would be the high tech council chambers, seating nearly 200 -- and accommodating 11 council members, should we revise the city charter. (The council offices sit right above the chambers, and the city manager's office right above that, connected by an internal stairway where one would love to be a fly on the wall.) Right outside the chambers, in the plaza, would be the stage, a large "game playing area" -- you know, chess, checkers, Toss Across -- and a Speaker's Corner as in London's Hyde Park.

Could you say, then, that City Hall, inside and out, is basically a big performance space? "Performance is a metaphor you can take a lot of different directions in Austin," Predock says. "Above all, it's a civic place, and I hope the citizens see it as a vital place. They're invited to come to spectacles, whether that be a performance on the bandstand or a meeting occurring in the council chambers. And the emotional accessibility that goes with that is part of the message." The spirit of Austin? By Jove, we think he's got it.

Predock will present to the City Council on Jan. 18, with an expected council vote to approve the design the following week. On the current schedule, the next phase of site work -- demolition having been completed months ago -- would begin in April with the excavation for the parking garage. Bona fide construction would begin in June 2002, with a grand opening in the fall of 2003.