The Fire This Time 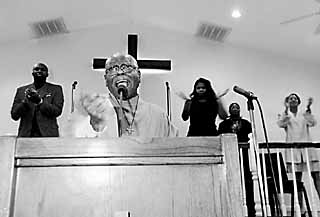 Members of the Eastside Social Action Coalition met Tuesday with members of the Austin Independent School District's Board of Trustees and district superintendent Pat Forgione, the second such meeting since November -- called to address what Coalition members are calling a "crisis" in educating minority students (see "Sterling Lands' New Mission," p. 24).

In October, ESAC President Sterling Lands handed School Board President Kathy Rider a letter demanding immediate action on 20 issues; those actions, Coalition members say, would help end a legacy of inequitable and racist public education policies. Otherwise, Lands and ESAC have threatened to pull their children from AISD schools and educate them in the community's churches.

The Coalition's issues represent a wide range of concerns, affecting everything from equitable resources to changes in curriculum. Forgione opened the latest meeting by offering a plan that would group the 20 issues into seven categories to be discussed in committees to be made up of Coalition members, deputy superintendents, and trustees. Forgione said he would like to finish the meetings by Feb. 28, in time to develop a specific plan of action to be incorporated into the next District Improvement Plan, scheduled to be brought before the board for approval in June. "If we work within the District Improvement Plan ... then it would be done quickly," Forgione said. "We want your [issues] to be at the heart and soul of what we're doing."

While the atmosphere at the meeting was convivial, it would also be fair to say that AISD officials were nearly performing advanced yoga in trying to mediate and defuse a volatile situation. Lands repeatedly emphasized that ESAC wants specific responses to each of its issues, not comforting generalities. They worry that merely adding recommendations to a district-wide administrative plan would not produce observable results in the classroom any time in the near future. "This is a crisis to us," Lands said. "The house is on fire and we believe the baby is inside the house. We don't want to sit around and talk about fire safety, we want to get the baby out of the house." First-year trustee Ingrid Taylor said she understands the need for observable improvements, but suggested that addressing the issues in the next DIP is a good place to start. "The concern I would have [in not directly addressing the issues in the District Improvement Plan]," said Taylor, "is that we would fix something only to have the same problem again next year."

As they pressed for immediate action, ESAC members also made it clear they were none too happy that they weren't briefed on Forgione's plan prior to entering the superintendent's conference room for the meeting, "so that if there were questions about it, that's what we could be discussing today," said Coalition member Stella Roland. "Time is of the essence here."

Lands said his group would decide whether to adopt AISD's plan at their general meeting two days later, Jan. 11, and would give AISD a final decision by Jan. 15.