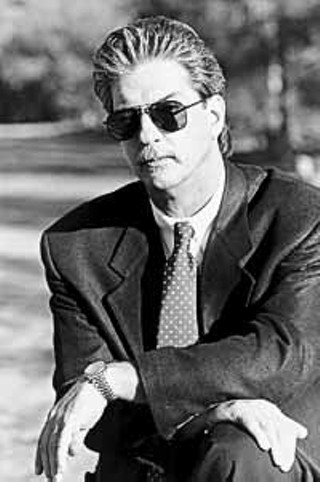 Say what you will about David Waters, the guy has nerve. In October of 1998, he contacted this reporter to talk about the disappearance of atheist Madalyn Murray O'Hair and her son and granddaughter. He alleged that the trio stole money from their atheist organizations, then fled. But Waters didn't have any hard evidence to support his claim, only a few vague letters. A few months later, as federal investigators began focusing on his role in the disappearance of the three atheists, Waters brazenly attended the Internal Revenue Service's auction of their belongings.

Waters, who once assaulted his own mother and is now in prison on a weapons charge, was scheduled to stand trial in January on charges that he masterminded the kidnapping of the three atheists. (In late December, Waters was granted a continuance until March). Although it appears the three were murdered, their bodies have never been found. (Authorities believe that Waters and Gary Paul Karr, an ex-con who was convicted last July of extortion, traveling interstate to commit violent acts, money laundering, and interstate transportation of stolen property, dismembered the corpses and buried them in rural Real County. But three lengthy searches of a West Texas ranch near Camp Wood have proved fruitless.) Waters faces federal charges of kidnapping, robbery, extortion, and interstate transportation of a weapon.

Waters will be tried by U.S. District Judge Sam Sparks, who has overseen most of the proceedings on the O'Hair case, including Karr's trial earlier this year. The case against Waters, 53, will be based on the same mountain of circumstantial evidence that federal prosecutors used to win a conviction against Karr, who was sentenced to life in federal prison. Prosecutors are hoping for a similar verdict against Waters, who last year was sentenced by Sparks to eight years in federal prison for federal weapons violations.

Tom Mills, the Dallas attorney who defended Karr, said given the quantity of circumstantial evidence (more than 300 exhibits were used against Karr), "Waters is going to have a pretty tough case to fight." Although Mills said much of the evidence against Waters will be the same, Waters has not given federal authorities a statement admitting his role in the kidnapping and extortion of the atheists. Karr did; he was acquitted on the kidnapping charge. "That could be a big difference" in the case, Mills said. William B. Gates, an Austin-based attorney who is representing Waters, did not return phone calls from the Chronicle.

Some of the strongest circumstantial evidence comes from a spending spree that Karr and Waters launched on October 3, 1995, just four days after Madalyn Murray O'Hair, her son, Jon Garth Murray, and granddaughter, Robin Murray-O'Hair, disappeared. Although the two men had scant financial resources, they checked into the Four Seasons on Town Lake and began living it up, spending hundreds of dollars on room service and champagne. They also went shopping, buying fancy watches, Armani suits, upscale shoes and $200 neckties. Karr bought a Harley. In all, they spent or hid about $80,000 of the $500,000 in gold coins they extorted from the atheists. The put the rest of the loot in a suitcase and stashed it in a storage locker at the Burnet Road Self Storage.

Karr and Waters didn't stay rich for very long. In a delicious bit of coincidence, the same day the two ex-cons checked into the Four Seasons, three young San Antonio hoodlums drove into the Burnet Road Self Storage looking to do a bit of robbery of their own. At locker number 1640, they hit the jackpot, lugging the suitcase full of gold coins into the back of their car. Like Waters and Karr, they too went on a spending spree, buying cars, guns, couches, and fancy watches, and visiting strip clubs.

In the case against Karr, a key witness for the prosecution was Patti Jo Steffens Chavez, Waters' former girlfriend. During the Karr trial, Chavez testified that Waters was obsessed with the O'Hairs and talked often about robbing them. She said that Waters became enraged after Madalyn Murray O'Hair wrote a venomous article about him and his criminal past in the July 1995 American Atheist newsletter. "He was furious with her, and he vowed revenge," Chavez told the court.

Chavez also talked about Waters' rift with Danny Fry, a Florida man who allegedly took part in the plot against the atheists. Fry's headless, handless body was found in Dallas County on Oct. 2, 1995. It remained unidentified until early last year. His corpse was finally identified after Fry's brother, son, and ex-wife provided DNA samples to the Dallas County Sheriff's Department. The samples were taken at the suggestion of the San Antonio Express-News, which has provided several key breaks in the case of the missing atheists.

Federal authorities have said one reason they are prosecuting Waters is that they fear he will get out of prison and still be spry enough to locate and kill his former girlfriend. Chavez broke up with Waters in 1998 and was a key informant for a search warrant that allowed federal agents to raid Waters' apartment on North Lamar in March of that year. Last year, Chavez testified against Waters in state court during a hearing on Waters' parole violations. She told the court that she left Waters due to her suspicions that he was responsible for murdering Fry. "I thought it would be a benefit to be no longer involved in a situation where a man was decapitated and his hands were cut off," she said. Neither Waters nor Karr have been charged with the murder of Fry.

Waters, a handsome, inscrutable man who Chavez said has a genius IQ, has long denied killing the atheists. Two years ago he said he had no idea where the atheists were, saying maybe "they were abducted by little green men." In a few weeks, a jury will decide if one of those little green men looks a lot like David Waters.