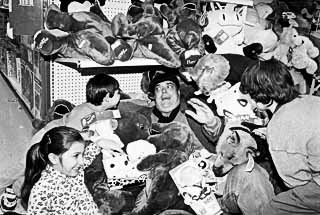 By this point they were ignoring me. "A parents' meeting? What's a parents' meeting?! Don't you all know each other already? And furthermore, how will anyone know you're parents unless you bring your children with you?" I wailed, but to no avail.

They were leaving their children with me for the day. For the day! Me! I don't even like children.

"What about changing them?" I sobbed as they walked out the door. "Stephen," said Barbara patiently, "Rosalind is eight years old. She doesn't need changing." "How will I entertain them?" I ventured desperately. Says Kate, "Let them entertain you! Ta-ta!"

"But, wait!" I begged, chasing them out to their cars. "How long will you be gone?" "Oh, a few hours ... six?" Cindy yelled back as they drove off, "Take them shopping or something!"

I was bereft. It was an evil scheme.

Shopping? My idea of shopping is leisurely browsing through an antique store or used bookstore -- neither of which sounded good with a gaggle of hellions nipping at my heels. But after an hour of hanging around my living room trying to interest them in a game of "Who Can Spot the Limoges China?" and "The Vintage Couture Identification Challenge," the idea of shopping sounded better and better.

First we stopped for "penny" candy. Let's make that "five-bucks-per-kid" candy -- anything just so we didn't have to hear another angelic chorus of "Shake Your Bon-Bon."

I considered just taking them to the grocery store and let them run wild -- I'd seen parents do that so often -- but what was I supposed to do in the meantime?

"What do you mean there's no smoking section?" I shrieked at the salesperson at the giant chain store toy mart. "What kind of place is this? We're looking at spending a fortune here, and that always makes me nervous. Where's the bar?? I can smoke in there, right?" "Sir, this is a toy store for children. Children don't drink and smoke," said the salesperson, sounding annoyingly patient with me. "I did!" I exclaimed, "And look at me!" She looked me up and down like a searchlight. I suddenly felt like vermin, and spun on my heel. "Come, children, we're leaving. They obviously don't want our business."

"Oh, Mi-i-i-i-i-chael!" I trilled across the department. "Michael, look at this great book: 7 Habits of Highly Effective Teens." "What's a Highly Effective Teen?" asked Michael. "Well, you know ... teens who know where they're going and what they want," I answered authoritatively. "I know what I want," replied Michael, looking in the direction of the video games. "A Nintendo Game Cube!" And he was gone. Too bad that's not going to be out on the market anytime soon. PlayStation 2, Dreamcast, and Color Gameboy lead the pack this holiday season.

These children looked deplorable, I thought. Since when had it become acceptable to let children pick out their own clothes? Believing passionately that a well-dressed child was a child on the road to success, and that these parents had really dropped the ball by overlooking this important child-rearing step, suddenly I felt wretched and old and out of date. But surely there must be a compromise? As a young gentleman, I remember picking out my own clothes -- it's true, in retrospect some of the choices were unfortunate -- but I imparted style and thought into each ensemble. And now ...? Well, the children needed my assistance, so we headed for the dreaded clothing department, where I thought we'd have a little style show. It was a complete waste of time. Sweaters went on backward, coats inside out, and dresses went on the floor. The children didn't care if they wore potato sacks, and after 10 minutes, neither did I.

"I knew this would happen," I thought to myself. "One, two, three ... there is a fourth one, right?" How would I ever explain to the parents? I didn't even know which child was missing ... Oh, yes I did. Harold! Omigod, like a little greased pig, he was constantly eluding me. "Harold!" I yelled across the store. No response. "Okay, children," I said, "Let's spread out and find him, and we'll meet back here." Finding myself unexpectedly (and mercifully) alone, I took stock of the situation. I wondered if I should just go home and let the store call me if he turned up. But then there's that explanation-to-the-parents business again. I decided to wander a bit. The other children had been distracted from their search, and were busily playing in different areas. I ended up in a quiet corner, marveling at how many of these toys I remembered from my own childhood, and my attention was grabbed by a quiet "zoom, zoom" sound coming from around the corner. There was Harold, so completely engrossed in the most glorious wooden train set that he had no idea I was watching him. His imagination was on fire as he raced the train up hills and over bridges and around corners. The high tech toys definitely had their appeal to the kids, but it was reassuring to see the attraction to the tried-and-true favorites.

From cars and trains, to Lincoln Logs and board games, the classic toys held enormous attraction. Yo-yos, tops, dominoes, and pick-up sticks all got a thorough going-over, proving that, while Zack may be the Great Brave Cyber Monster Hunter every afternoon, he's still a little boy, too ... just don't tell anyone.

We went to many places on our shopping journey. Unfortunately, we couldn't hit all the cool stores in town which carry some of our featured items. The list below is where we actually went. Prices quoted are from those specific stores only and are noted as such in captions.