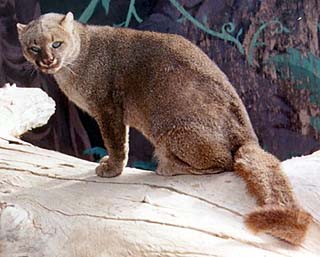 The Texas-Mexico border has long been a setting for political skirmishes, a conflict zone where figures hide in the shadows, hoping to find a gap in the paramilitary operations that attend the Rio Grande, which separates the U.S. from its southern neighbor. So, when the U.S. Immigration and Naturalization Service (INS) decided in the late 1990s to beef up its border operations in the lower Rio Grande Valley, it followed that it would become harder for illegal immigrants to hide from the agents patrolling the area. What the INS didn't realize was that by increasing patrols, clearing ground cover, erecting fences, paving roads, and shining bright lights along river basins, it would not only put pressure on illegal immigrants and smugglers, but diminish the chances of survival for a pair of endangered wildcats, the ocelot and jaguarundi.

These cats still survive in only a few parts of the American West. At last count, there were fewer than 100 ocelots in Texas. Most of those make their homes in the various federal wildlife refuges that dot the Rio Grande Valley, which Johnny French of the U.S. Fish & Wildlife Service (USFWS) calls "our string-of-pearls refuge" because, unlike most national preserves and parks, the properties are not integrated into a single sanctuary. The housecat-sized jaguarundi may be even rarer than the ocelot: The only confirmed jaguarundi sightings in Texas since the last census a decade ago have been roadkill.

Both of these sensitive felines prefer to roam in thick native grasses that harbor insects, birds, and rodents. But that kind of ecosystem is fast disappearing from Texas and elsewhere, thanks to increased development and the conversion of grassland into cattle ranches. "We're losing habitat all over the place," says French. "It's a private lands issue, and we just don't have a lot of control over that, but we can preserve more habitat for the cats with the help of the Border Patrol. It's not going to be easy, but I'm sure we can find a way to work this out."

Last year, environmentalists filed a lawsuit accusing the INS of initiating Operation Rio Grande, as the border security effort was called, without adequate public comment or environmental review. According to Defenders of Wildlife, the Sierra Club, and the Frontera chapter of the Audubon Society, the law enforcement agency failed to adequately consult with other federal agencies about the implications of the project for endangered species.

According to assistant Border Patrol chief Rey Garza, the agency's main failure was that it didn't make its plans available to the public as required under the National Environmental Policy Act. But Garza maintains that for three years, the INS had regular consultations with the USFWS over Operation Rio Grande.

Under the terms of a settlement reached in September, the USFWS and the Environmental Protection Agency will take part in a formal review of Operation Rio Grande. A full environmental impact statement (EIS) on the project will be completed by next summer, and the public will get two months to comment. Until the EIS is completed, the INS will close 11 roads along the wildlife corridor, limit mowing in the Rio Grande flood plain, and refrain from installing new lights, fences, boat ramps, and roads. As the INS looks at future projects along the U.S.-Mexico border, this case may provide a model for what's acceptable.

The settlement pleases Mary Lou Campbell, a Texas Audubon member who has been working with the Border Patrol to make their policies more environmentally friendly. "Sometimes it takes public action to get the federal agencies to follow the law, but we have to be optimistic," says Campbell. "This is a region of enormous biodiversity. It's a meeting place between tropical and subtropical ecosystems, and serves as a last frontier for many of these [endangered] species."

The INS's Garza says he believes national security and environmental policy can be compatible in the long run. "Of course we believe national security is more important," he says, "but there was quite a bit of controversy and I think we've shown that we can work together and turned this into a positive thing."