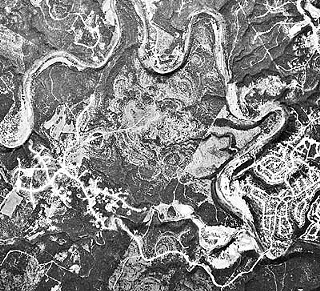 The current debate over yet another city settlement deal with developers in the Barton Springs watershed supports Einstein's theory that time is not an absolute concept: Depending on the observer's perspective, time can be bent, slowed, or accelerated. The debate seems caught in a weird time warp. It seems that only yesterday, 800 citizens waited in line at council chambers until three in the morning to voice their displeasure with the city's plans to approve a development deal on a 4,000-acre tract of land a dozen miles upstream of Barton Springs. The issues then were sewage and zoning. The issues today are sewage and zoning. The only new variables in the old equation are the old airport and new legislative limits on Austin's authority to control growth.

Readers not familiar with the history of the developers' fight with environmentalists over the fate of Barton Springs will find it recapped in Robert Bryce's "Stratus Flows Downhill" (p.28) In "Stratus Quo" (p.34), Amy Smith looks at the particular developer who's making demands on the council this time around. Mike Clark-Madison's "The Art of the Deal" (p.40) considers the city's willingness to put part of Mueller Airport on the trading block in exchange for undeveloped property Stratus is now holding hostage in the Barton Creek watershed. And "What's the Deal?" (p.38) outlines the Stratus proposal and provides the environmental community's responses to the most important provisions.

The City Council has completely turned over since 1990, but several current council members were elected to the positions they hold by the work of the green coalition that came together a decade ago in the crucible of the old City Council chambers to protest irresponsible development on Barton Creek. And the developers' names have changed. What was FM Properties is now Stratus Properties, heir to what's left of Jim Bob Moffett's FM Properties and the work his lobbyists have done to impair the city's power to control development.

What are the proposals before City Council? Stratus has requested mixed-use zoning -- and the extension of city sewer service -- for several huge tracts of land in the environmentally sensitive Barton Creek watershed. With the request comes the implied threat to develop the company's land however it wishes, because the Legislature has limited the city's power to regulate development (after the City Council capitulated to its constituents and imposed limitations on developers in 1990).

Is the city really without the power to stop development? As Mayor Kirk Watson might say: "Not hardly." By law, without city sewer services, "each new home or living-unit needs about 8,000 square feet of irrigation land," as Robert Bryce writes in this issue. Clearly, the provision of sewer services -- or the denial of same -- is one of the defenses the city can effectively employ against irresponsible development.

Zoning is the other, and in this case it is particularly useful. Stratus is evidently ready to trade some of its property on the watershed -- or at least some of the density -- for a piece of the development action at Mueller. Astute observers of the prospective trade, such as longtime local environmental leader Mary Arnold, reasonably ask why the city would grant Stratus' zoning request and thus instantly increase the value of the company's property, just before accepting the property in what Stratus has suggested will be a "dollar-for-dollar" trade. To first grant that zoning request, then take the property in a trade, seems on its face an an act of fiduciary irresponsibility to the taxpayers.

The City Council and the mayor should proceed slowly here. And citizens interested in stopping the decline in water quality at Barton Springs should attend with interest the two public hearings and subsequent council meetings addressing the city's deal with Stratus. Time after time.

Three aerial views of the Barton Creek Properties illustrate the steady pace of development that has occurred over the past 15 years.

The first photo was taken in 1984, when Ben Barnes and John Connally had just started developing the Estates of Barton Creek.

The second photo was taken in 1990, the year the SOS Alliance mounted a campaign to stop FM Properties' Planned Unit Development. The Estates development is complete, but Stratus has not yet begun its buildout.

The third photo was taken in 1999, nine years after the SOS Ordinance was enacted by the City Council, imposing limits on development.

The fourth photo is the same 1999 photo, with color overlays indicating additional development Stratus Properties is requesting City Council approve. The shades of pink represent impervious cover levels from under 10% to as much as 60%.