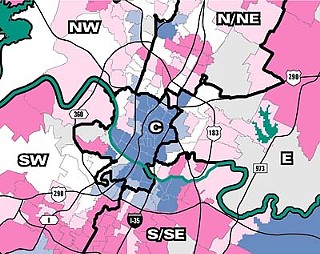 The failed light rail referendum is one race on the ballot where "what happened?" is a question that deserves to be answered. On the chart, it looks like the same old story: a landslide of support in Central Austin, and narrower defeats everywhere else. So it was that low turnout in the progressive precincts in Central Austin derailed the A-Train.

That's only part of the story. The South/ Southeast also helped put the kibosh on rail; between the Sammy and Bob boxes south of Ben White and the El Concilio boxes along East Town Lake, you saw anti-rail turnout that, if reversed or not present, could have made the difference. (The actual margin of defeat in South/Southeast was 1,899 votes.) However, the boxes in South Central Austin, ground zero for a lot of anti-rail effort, did not appear to take anti-rail spokesman Max Nofziger's bait. The two boxes that flank the South Congress strip -- where former council member Nofziger was working the hardest -- went for light rail by margins of 31.7% and 28.8%.

All of this is evident on the map, where the anti-rail terrain extends right up to the border of the 78704 ZIP code in South Austin, while on the north side, even the most aggressively anti-rail neighborhoods didn't deliver the way rail opponents had hoped. Even in Crestview and Wooten, where rail was guaranteed to lose, it didn't lose by that much -- only 2.2% in box 244, 10.3% in box 245.

And note how far into the hills in the west those white boxes extend. Those are the swing boxes where rail passed or failed by less than 5%. Of the 42 boxes in this category, 15 split for rail, including boxes in Williamson County, Oak Hill, Northwest Hills, Wells Branch, and Scofield Farms -- none of which you'd call liberal bastions. In all 42 of the swing boxes combined, light rail lost by 849 votes. So if we get another swing at the light rail piñata in 2001, all other factors remaining the same, a combination of swing-box seduction, south-side amelioration, and Birkenstock Belt motivation could well put the train back on the track.