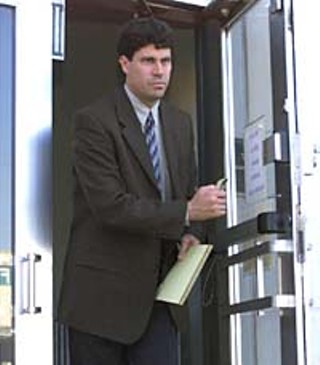 If John C. Danforth was trying to bury his final report on Waco, he could scarcely have picked a better time. His report, which absolves the government of any wrongdoing during the standoff, was quietly posted on the Web at 11am on Nov. 8. Less than 10 hours earlier, CNN had named George W. Bush our 43rd president. Minutes later, the network took it all back and the recount frenzy began.

By releasing his report on the heaviest news day since Mount Carmel burned to the ground in 1993, Danforth was able to avoid scrutiny of his conclusions. He told The New York Times that his report was largely completed a month ago, but he decided to wait until after the election to release it. Why wait? Because, the former U.S. senator said, it had "zero political content."

Danforth may believe his report (available at www.osc-wago.org) is apolitical. And given the ongoing furor over the Florida recount, the report, which took 14 months and $17 million to produce, is unlikely to get much scrutiny. But Danforth's decision to prosecute Bill Johnston, the former federal prosecutor from Waco who was indicted by a federal grand jury shortly before the report was released, could be as contentious as a Palm Beach precinct meeting.

Johnston was the first one to tip Attorney General Janet Reno to the fact that government forces had used pyrotechnic devices at the Davidian compound. Now he faces felony prosecution for not divulging that information sooner.

The grand jury, in its five-count indictment against Johnston, alleged that he hid evidence about the FBI's use of pyrotechnic tear gas during the 51-day standoff between federal agents and Branch Davidians, and lied to federal investigators and grand jurors during the investigation of the standoff, which ended with a fatal fire on April 19, 1993, killing some 80 Davidians.

By indicting Johnston, Danforth appears to be heading for a nasty showdown in court with the former prosecutor and his allies. Sources close to the matter believe that Johnston's lawyers will subpoena Danforth and make him take the witness stand, where they will ask him about the truthfulness of statements he made to both Johnston and the media. It also appears likely that Danforth's investigators could be forced to take the stand to discuss threats they reportedly made to Johnston and his lawyers.

One source close to the matter said that when the two men met earlier this year, Danforth told Johnston that he was not planning to bring charges against him. Danforth reportedly told Johnston that he could have brought charges against FBI attorney Jacqueline Brown, who, Danforth's preliminary report says, "lied to the Office of Special Counsel during the course of this investigation." Instead, he targeted Johnston. Why? The source said that Danforth's investigators repeatedly told Johnston that they were going after him because "he's the one who blew the whistle." The investigators have "admitted that they are going after him out of vindictiveness," said the source.

The threats by Danforth's people against Johnston were confirmed earlier this year by Austin lawyer Roy Minton. He said the investigators were insisting that Johnston be charged with felony perjury. "That was the reason they wanted to charge him with a felony, because they wanted him to lose his law license," said Minton.

Danforth refused to comment on the indictment of Johnston, who pleaded innocent during his arraignment in St. Louis on Monday.

Johnston's lawyer, Michael J. Kennedy of New York, said in a prepared statement that by indicting his client, Danforth "seeks to destroy the messenger and whitewash the government excesses in Waco."

Danforth's 17-page indictment of Johnston, which includes two counts of obstruction of justice and three counts of lying to investigators and a federal grand jury, focuses on what Johnston knew about the FBI's use of pyrotechnic tear gas during its final assault on the Davidians' home. In 1993, during preparation for the criminal trial of several Davidians, Johnston made some handwritten notes that included the word "incind" -- an apparent abbreviation of "incendiary." The indictment alleges that when he made that notation, Johnston knew that the FBI had used pyrotechnic tear gas rounds against the Davidians, but had then hidden that knowledge from investigators. The indictment also charges that he knowingly hid information from Danforth's grand jury and made false statements to the Office of the Special Counsel.

Rumors about a possible indictment of Johnston have been swirling since July, when a $675 million civil lawsuit brought by the Branch Davidians against the federal government ended with a five-member jury acquitting the government of any wrongdoing. On Sept. 20, U.S. District Judge Walter Smith Jr. issued a final order dismissing the case. The Davidians are planning an appeal of the decision.

James Brannon, one of the lawyers for the Davidians, said that the indictment of Johnston "certainly smacks of retaliation." He added that he hasn't been impressed with any of Danforth's inquiry into the Waco matter. "I have nothing good to say about the Danforth bunch," he said.

Johnston helped re-ignite controversy over the Waco standoff in August of 1999, when he wrote to Janet Reno: "I have formed the belief that facts may have been kept from you and quite possibly are being kept from you even now, by components of the department." Although Johnston's letter helped convince Reno to appoint Danforth to investigate the matter, it effectively ended Johnston's career with the federal government.

In addition to his indictment of Johnston, Danforth has asked the Department of Justice to terminate two assistant U.S. attorneys, Ray and LeRoy Jahn of San Antonio. Like Johnston, the husband-and-wife team of prosecutors helped send several Davidians to jail after the standoff ended. Danforth said the Jahns should be fired because they went to "great lengths" to conceal their knowledge of the FBI's use of pyrotechnic tear gas rounds.

While there are mixed feelings among Waco experts about the Jahns, many observers believe the indictment of Johnston is wrongheaded. "I think they are making Johnston the scapegoat," said Stuart A. Wright, a sociology professor at Lamar University in Beaumont who has written extensively about the Waco controversy.

"The public has a general perception that the government did something wrong" at Waco, he said. By ignoring apparent wrongdoing by FBI commanders Dick Rogers and Jeff Jamar, as well as Bureau of Alcohol Tobacco and Firearms commanders Phillip Chojnacki and Chuck Sarabyn, Danforth missed an opportunity to deal with the Waco tragedy, Wright said. Prosecuting Johnston, Wright said, is not "going to alleviate the grief a lot of us feel about Waco."