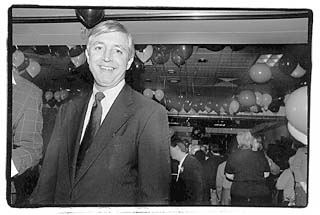 Despite an infusion of Republican cash into opponent Shane Phelps' campaign, DA Ronnie Earle won by a decisive margin. (Photo By John Anderson)

Despite their GOP opponents' attempts to paint Travis County's top two law enforcement officials as inept flops, District Attorney Ronnie Earle and Sheriff Margo Frasier scored what seemed to be all-too-easy re-election victories Tuesday. Earle emerged with more than 55% of the vote over GOP rival Shane Phelps, while Frasier, who made history four years ago as the county's first female sheriff, kicked butt with a nearly 56% victory against Republican Woody Edmiston.

Standing amid well-wishers at the Hyatt Regency Tuesday night, Earle summed up his re-election victory in three words: quality of life.

That's not the message one would ordinarily expect the county DA to hammer home at the end of the campaign trail, but that and the fact that he's been around forever (this will be his seventh term) worked to defeat Phelps, chalking up his second unsuccessful bid for Earle's job.

It's quite possible that voters, at least those who paid attention, were turned off by Phelps' tough-on-crime stance at a time when Austin is enjoying a low crime rate streak. Moreover, Travis County juries have shown they do not share Phelps' bullishness on the death penalty.

"This campaign has been a kitchen table conversation with the people of Austin about our quality of life," Earle said between congratulatory handshakes, with his wife, Twyla Earle, and daughter, Municipal Court Judge Elizabeth Earle, by his side. "We can best protect that quality of life by sharing the powers of the criminal justice system with the neighborhoods." As for his opponent, Earle said, "We represent different law enforcement philosophies."

The most volatile element missing from this year's DA rematch was the ghost of Kay Bailey Hutchison, the popular Republican U.S. senator whom Earle had sought to prosecute in 1993 on unethical conduct allegations stemming from her tenure as state treasurer. Earle abandoned the charges on the eve of the trial, making him a laughingstock in legal and political circles statewide. Three years later, the GOP, still incensed over the Hutchison fiasco, sent Phelps to the front lines to wrest the DA title -- and its statewide powers -- away from Democrat Earle. The GOP money that fueled Phelps' 1996 campaign (with at least a third of it -- $100,000 -- coming from the Associated Republicans of Texas), combined with Earle's own fattened war chest, made the 1996 race the county's most expensive DA contest in history.

This election year, state GOP leaders were far more concerned about legislative races than they were with the DA's race, and Phelps got fewer campaign contributions as a result. All told, he managed to raise about $173,000 -- well below his initial goal of $300,000. Earle received about $235,000 in contributions.

The district attorney begins his new term on Jan. 1, with two of the county's highest-profile cases still unresolved. Earle has yet to decide whether to re-try or drop charges against teenager Lacresha Murray, whose conviction in the death of a two-year-old girl was overturned last year. And three men await trial in connection with the deaths of four teenage girls in the so-called yogurt shop murder case. With no physical evidence against the three men, police have only the confessions of two of the suspects, both of whom say police coerced them into making the statements.