Down Came the Rainey 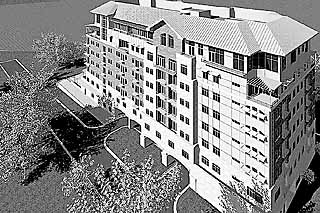 The time for closing down Rainey Street may be now. Within days, we'll know whether developer Gordon Dunnaway has found enough willing sellers in downtown's last working-class neighborhood to proceed with plans for a very, very big redevelopment project along Rainey. How big? Several hotels, office buildings, a sports arena, new residential and retail, and 5,000 or more new parking spaces. Or something like that.

To recap: Squeezed as they are between horribly congested I-35, the ever-expanding Austin Convention Center, and the rest of the downtown gold rush, almost all of the few dozen neighbors and property owners on Rainey Street are ready to bail. Many have been ready for decades, but previous attempts to redevelop Rainey were shot down to protect the interests of the mostly lower-income, mostly Mexican-American owners and residents. And the neighbors have long realized that if they don't all sell out together, to a developer willing to buy the whole street, nobody will get a good deal.

Even last year, when the Rainey neighbors hooked up with adjoining landholders Perry Lorenz and Robert Knight to float a "strategy" to turn their street into a dense urban Smart Grown experience, some scoffed that no real developer would pay downtown prices and build out the area to downtown intensity. (Lorenz and Knight's aim was to package the property, not to develop it themselves.) Whether Austin should allow such a project was almost beside the point.

One who was less than convinced was Dunnaway, who after much ado got his own property at the foot of Rainey re-zoned for the high-end condo project now known as 54 Rainey Place. Back then -- though they endorsed Dunnaway's project in concept -- the Rainey neighbors, and especially Lorenz and Knight, wanted its re-zoning postponed to synchronize with their strategy, which Dunnaway at the time termed "speculative."

Well, now Dunnaway is offering $60 a square foot or more just for the Rainey land, which isn't quite as high as the most wide-eyed price estimates a year ago. Still, it's ample evidence that Lorenz and Knight's speculations are now Dunnaway's real live deal. It also means that elderly Hispanic householders of modest means could be moving on with half a million dollars in pocket, which pretty well defuses any argument that these folks are being exploited. Indeed, Eastside Mexican-American activist voices such as El Concilio, which led past opposition to Rainey redevelopment, have, at least tacitly, signed off on the current plans.

"For the first time ever, all the factors are in place -- economic, political, emotional -- for this project to go forward," says Dunnaway. "And I haven't instigated it. The money came to me at the same time as the neighborhood came to me, and it seemed like the right opportunity, even though the risk in this town is gigantic." (For the record, the source of the financing is under wraps, except that it's "not local, and it's people who I've worked with in the past, and some are people who've wanted to work in Austin but have been unwilling to take the risk.")

So what are these risks? Well, key Rainey neighbors could hold out, though that fear is no longer very great. More obviously, the city and its citizens could go into a tizzy over such a big glossy urban project replacing such a small, funky neighborhood. With the neighbors' interests well and truly covered, it's now the same old fin-de-siècle Austin angst that has made Rainey newsworthy and a litmus test for the City Council.

As Dunnaway points out, if the large-scale, high-density, mixed-use urban infill he plans isn't Smart Growth, then it's hard to say what is. And even Smart Growth agnostics might think twice about fighting Dunnaway, now that yet another player has arrived on the street -- Vignette Corporation, which wants to build its $200 million headquarters on land owned by Lorenz and Knight adjacent to Rainey, and which is choking on its need for parking, which Dunnaway will have in abundance. (Likewise, the Center for Mexican American Cultural Arts -- née MACC -- to be built right next to 54 Rainey Place, could tap Dunnaway for parking.)

"We've met everyone's need," Dunnaway says. "The neighbors get money, the houses get saved or moved if the neighbors so choose, the [lakefront] park gets improved and maintained, the [CMACA] is protected, [the] lake approach is respected, we have hotel rooms, we have downtown housing, the [Convention Center] gets parking, Vignette gets parking if they choose, we have an arena and new venues ... [and] if we pull this off, it's a $400 million project on the tax rolls with an annual $100 million payroll, and that's not all engineers."

But there is one need Dunnaway knows he can't meet: the desire of the Heritage Society of Austin and the city's Historic Landmark Commission to see Rainey Street, which was listed on the National Register of Historic Places in 1987, preserved intact as a historical district. (Rainey neighbors say the National Register application was submitted without their knowledge or consent.) Dunnaway, like Lorenz and Knight, envisions relocating and restoring selected houses, but that will not satisfy. The HSA has recently produced an updated survey saying, in effect, that Rainey is more historic than they thought, and that even the shrubs and banana trees are historic resources.

All well and good, but a National Register listing does nothing to prevent willing buyers and sellers from doing as they please with their land, as long as no public funds are involved. What would queer the Dunnaway deal is if some or all Rainey properties were given historic zoning, a strategy that the Historic Landmark Commission has adopted, to great controversy, in recent months on other vintage properties. The chances that the HLC could get supermajorities on both the Planning Commission and City Council to re-zone Rainey against the neighbors' wishes are nil, but it's the principle of the thing.

What galls the Rainey neighbors most is that the Heritage Society, which has official status as part of the city's downtown brain trust, is all set to sign off on the Vignette project, which Rainey sees as the final nail in the coffin of their quality of life. "We've told them they needed to work with a neighborhood they could still save," says Rainey Street's most famous resident, former City Council member Brigid Shea. "They've been invisible on so many cases [of encroachment on Rainey and similar neighborhoods] that it's hard for them to come in now with integrity."

But that's the only buzz-buster looming around the corner for Rainey Street. "This is the only case I know of where a group of elderly low-income Hispanics banded together with a diverse group of other interests," says Shea, "and are pulling off this high-powered real estate deal instead of being cheated out of it. And there's a sense of camaraderie -- none of us have ever done such a deal. There's a great sense of achievement."