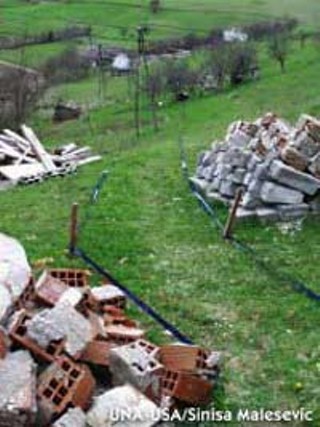 In the village of Praca, Bosnia, deminers have cleared paths for residents to walk safely; the areas outside the tape are not guaranteed to be mine-free.

Every 22 minutes, someone is injured by a land mine explosion. Seventy countries around the world have land mine-infested fields, orchards, and back yards. There's no warning before a land mine explosion; they just go off unannounced. Anyone can be maimed or killed, but children are especially vulnerable: Some land mines look like toys, bright green and inviting.

"The first time I saw a child coming down the street with a rifle grenade in his hand, I was so startled and terrified that I couldn't even scream -- which was probably good, since he might have gotten scared and dropped it," Mara Vujkovic, who lives in the village of Praca, in the Serbian portion of Bosnia and Herzegovina, told a Bosnian correspondent from the Adopt-a-Minefield Campaign. "'There's no reason to be scared,' he said. 'It's just a rifle grenade that I found in the garden around our house and I'm getting rid of it.'" 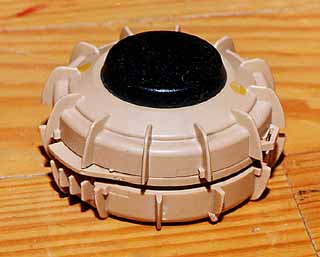 Land mines, which are often brightly colored and toylike, are a particular danger to children in wartorn countries.

Praca lies about 30 miles southeast of Sarajevo; it used to be home to 3,000 people. In 1991, when war broke out in the former Yugoslavia, nearly all of the village's inhabitants fled to other towns and countries, or to refugee camps. Now, in the midst of a shaky peace, they want to go home. But daily life, let alone reconstruction of their destroyed buildings, is all but impossible with mines scattered randomly in a thick layer under the ground. Meanwhile, local businesses are in ruins and there are no jobs. A few companies have started reconstruction, but most have given up. Among the 500 villagers who have returned to Praca, most try to make money the same way -- chopping firewood -- but there is no one to sell it to.

Praca is the city adopted by the Austin chapter of the Adopt-a-Minefield Campaign, which is coordinated by the United Nations Association. Adopt-a-Minefield chapters raise money locally to clear land mines in an adopted city, and forward the money directly to the United Nations, which actually clears the mines. Austin Adopt-a-Minefield co-chairs Mary Berwick and Roxanne Elder hope to raise the $34,000 it will take to demine the fields and return village life to normal. Austin was the first Texas city to adopt, but Houston has recently joined the program.

Local businesses and private contributions have already paid Adopt-a-Minefield's administrative costs, so every dollar contributed since the Sept. 21 kickoff date can go toward demining Praca. "What I really liked was the simplicity of the project," Elders says. "You raise the money, you write the check, you've demined the village."

So far, Austin Adopt-a-Minefield has raised a fifth of the money they need, mostly in personal contributions of around $100. They also hope to start a holiday program called "Give a Piece of Peace," encouraging donors to make a gift contribution in another person's name.

In addition to the money it will take to demine Praca, Adopt-a-Minefield wants to raise $16,000 to buy and train a mine-sniffing dog for one of the U.N.'s dog teams, deployed worldwide to detect the smell of explosives and alert their handlers to the mine's presence. (The practice is endorsed by the Humane Society, so breathe easy, animal lovers.) As part of the U.N. program, dog handlers also teach people in mined villages to train their own mine-sniffing dogs.