Put That in Your Pipe and Smoke It 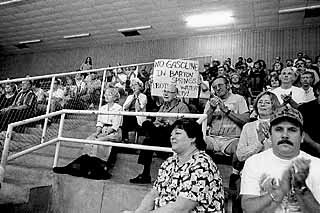 Nearly 500 people turned out for a Monday night rally against the Longhorn Pipeline, which would carry gasoline from Houston to El Paso. (Photo By John Anderson)

The anti-Longhorn Pipeline coalition, Protecting Individuals Protecting the Environment (PIPE), was preaching to the choir on Monday night, and the choir wouldn't have had it any other way. Nearly 500 people braved gusty rains and confounding traffic detours in order to get to the Burger Center gymnasium in South Austin, and they were ready to hear the gospel.

Elected officials, from freshman Austin City Council Member Raul Alvarez to U.S. Rep. Lloyd Doggett, all testified that they're ready to take on state government, Big Oil, and the White House -- whether it's controlled by a Republican or a Democrat -- in order to protect Austin residents from the threats posed by the Longhorn Pipeline. Hallelujah!

Doggett, who has been leading the fight against the pipeline in Washington, D.C., received a hero's welcome from the crowd. "I told the bureaucrats that all they needed to know is that they need to put this pipeline somewhere else," he said, before handing the podium to fellow Democrat Ann Kitchen, who is running to represent Austin's District 48 in the state House of Representatives. "It is simply an unacceptable risk," Kitchen said. "Our state government is not doing what it takes to protect us."

For two years, a proposal to use the 50-year-old Longhorn Pipeline, which has been out of commission since 1995, to pump nearly 225,000 barrels of gasoline, jet fuel, and diesel daily from Houston to El Paso has drawn the ire of community and environmental activists in and around Austin. The problem, opponents insist, is that the pipeline -- which bisects the Edwards Aquifer and could contaminate the groundwater there if it leaked -- simply is not safe. At the very least, pipeline opponents say, the federal government should perform an official assessment of the project's environmental impact, and make it available for public review.

The White House Council on Environmental Quality has already ruled that the pipeline will have no significant impact, but a long-awaited decision by the Environmental Protection Agency will determine whether the pipeline can go forward without further environmental review. Due to consultations with the U.S. Fish and Wildlife Service, the EPA has already recommended -- and the Longhorn Pipeline Partnership, made up of Exxon, British Petroleum, and Amoco, has agreed -- that nearly 20 miles of pipe must be replaced in order to protect the endangered Barton Creek salamander.

According to organizers, Monday's rally was scheduled in part because PIPE anticipates that the EPA will hand down its decision in the next couple of weeks, although the feds have failed to stick to any sort of timeline on the project so far. Anti-pipeline activists vow they will sue the federal government if it does not require a more extensive environmental study.

Although no Green Party candidates were invited to speak at the rally, Green presidential candidate Ralph Nader was expected to address the pipeline issue on his swing through Austin this week.

Meanwhile, Doggett has been doing battle in Washington, D.C., to ensure that legislation addressing pipeline safety provides adequate safeguards for the public. Speaking against a bill that passed the Senate last week, Doggett said, "We need a real pipeline safety bill, not a legislative illusion that does more to appease special interests than to protect American families." On Monday, Doggett reiterated his claim that the name of the federal Office of Pipeline Safety is "an oxymoron."

Engineer Lauren Ross used her time at the podium to explain the problems PIPE perceives with the pipeline itself. Ross said the EPA should make public the toxicity of the various fuels that would travel through the pipeline. She added that no one had studied how a leak could affect not only the Edwards Aquifer, but water supplies in and around El Paso and other West Texas communities. Finally, Ross noted that the federal government had not determined the impact a leak might have on air quality or the likelihood that such a leak could cause an explosion. "There is absolutely no scientific basis on which the Council for Environmental Quality, the EPA, or [the Office of Pipeline Safety] could conclude this pipeline is not a serious risk to human health or the environment," she said.

Others who spoke at the rally included Austin City Council Member Daryl Slusher, Travis County Commissioner Margaret Gomez, neighborhood activist Marguerite Jones, and former City Council member Brigid Shea. Grant Goodwin and Darlene Byrne -- who are running for county court-at-law judge and 126th District judge, respectively -- were both working the entryway to the gym. Neither the Gore nor the Bush campaigns have publicly addressed the pipeline issue.