Corporate luminaries in town for the Fortune 500 conference will be met by a bevy of protesters against the event. 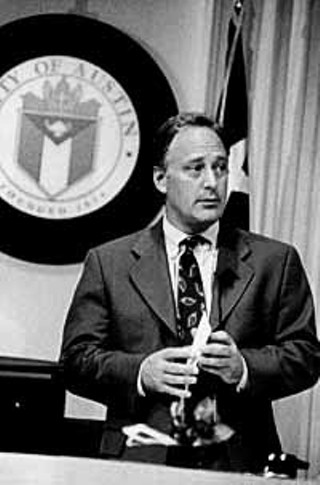 Corporate chieftains coming to Austin are looking for big ideas, not good grammar. That, at least, appears to be the case with the Fortune 500 Forum, which starts today, Thursday, Oct. 13, at the Four Seasons Hotel and will be attended by about 150 CEOs, chairmen, and presidents from America's biggest companies. The theme of the conference, sponsored by Fortune magazine, is "Doing Business Different: Strategies From Maverick CEOs."

Why Fortune couldn't afford a copy editor to render their theme more grammatical isn't known, but the costs and potential disruption to the city of Austin during the conference will be significant. For instance, the city will be spending an estimated $20,000 to $30,000 on overtime for police to provide security for the event, which includes a speech by Vicente Fox, Mexico's president-elect. And on Friday afternoon, an anti-Fortune 500 demonstration could tie up downtown rush hour traffic as marchers make their way from the Capitol to the Four Seasons.

The demonstration is being put together by a coalition of animal rights activists, environmentalists, and others mobilized as No to the Fortune 500 (http://www.o13.org). According to organizer Brian Couser, the group's goal is to "let corporate powers know that they can't use our capital, our university, and our city without hearing from the people."

The planned demonstration, which the group says will begin with a rally at 3:30 at the Capitol and a march at 4:30, has caused plenty of worry within the Austin Police Dept., which is hoping demonstrators don't mimic the actions of anti-World Trade Organization activists last year in Seattle, or the recent rioting that occurred in Prague during meetings of the World Bank. The group is also planning a vigil during Fox's speech at UT tonight.

APD wouldn't confirm their security plans for the event. But critics, including Texas Monthly publisher Mike Levy, whose police scanner is always turned up to 11, contends Fortune should be paying for the security costs. "It's symptomatic of a greater problem," says Levy, who has long insisted that the city has too few police officers. City officials "think about everything but the people."

The demonstrators have a city permit to march. But deputy city manager Toby Futrell says they can't begin until 6pm, after most downtown commuters have left the area. If they start earlier, says Futrell, they will have to stay on the sidewalk. If they don't stay on the sidewalk or start to get rowdy, she added, police will "take an appropriate response. But we won't pick a fight." But Couser said on Monday that the group has a permit to start marching at 4:30 and will do so.

While the demonstrators will be getting attention outside, the forum itself is attracting the biggest names in business. Speakers include Marc Andreessen, the co-founder of Netscape and current chairman of Loudcloud Inc., Gordon Bethune, chairman and CEO of Continental Airlines, Michael Dell, chairman and CEO of Dell Computer Corp., Herb Kelleher, chairman, president, and CEO of Southwest Airlines, and Ken Lay, chairman and CEO of Enron Corp. Along with the speeches, conference attendees, who are paying $4,200 apiece, will hear discussions on philanthropic giving, human genomics, and of course, the Internet.

During their stay, the execs will be given free use of brand-new Jaguars, courtesy of a sponsorship agreement with Jaguar Cars. Fortune is also getting a $250,000 subsidy from local businesses who agreed to cough up cash in exchange for face time with the corporate leaders. Donors include National Instruments, Hoover's Inc., Hire.com, BMC Software, and Vignette Corp.

Levy also noted that hobnobbing with the corporate bosses will help Mayor Kirk Watson raise campaign funds in the future, should he decide to run for higher office. Whether that charge is fair or not, Watson will clearly enjoy a higher profile thanks to the event. Watson insists the city will benefit, too. "The amount of money coming into your city ends up offsetting [the costs] and making money," he said last week. Moreover, "anybody who comes to our town, we work to provide safety. That's what it is all about."

Preparing for the event, said one cop, is comparable to what the city did prior to the city's New Year's Eve bash downtown last year. "We were prepared for the worst and we didn't have anything close to being bad. It turned out to be a positive, good event." But the officer, who asked not to be named, is also concerned that the event will deplete APD's overtime coffers and handicap the department if other unexpected manpower problems emerge.

Fortune spokesperson Terry McDevitt said the magazine welcomes the demonstrations against the forum and that it is looking forward to having the protesters be a "lively part of the dialogue." As for "doing business different," McDevitt was quick to point out, "I didn't make it up."