Is Stratus Properties Building, Bargaining, or Backing the City Into a Corner? 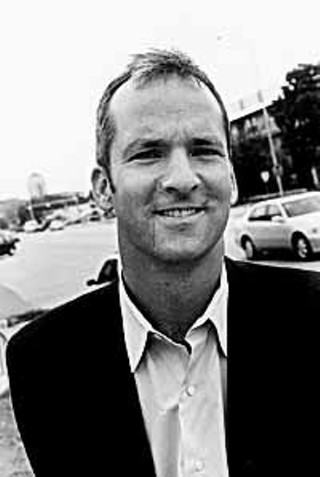 At least that's how leaders of the Save Our Springs Alliance regard a proposed agreement that would allow a mega commercial and residential development across 4,000 acres of sensitive terrain in Southwest Austin. SOS described the planned development as one that would rival the suburban asphalt jungle that looms just north of Dallas. Even the Statesman likened the project's size to four downtown Austins.

Why, then, is the City Council sending signals that, even after 10 years of holding the developer at bay, it's now willing to sign off on a deal that would allow Stratus Properties to build 1,400 homes, nearly 5,000 apartments, and 6.5 million square feet of commercial development in what the locals call paradise?

Mayor Kirk Watson says the city has little choice under House Bill 1704, a pro-development law that the Texas Legislature re-enacted last year after it was inadvertently repealed in 1997. The law allows Stratus, formerly known as FM (Freeport McMoRan) Properties Operating Co., to build under less stringent environmental rules that existed before the current SOS water quality ordinance, which city voters overwhelmingly approved in 1992. The flip side of this agreement, the mayor says, is that Stratus is willing to abide by SOS rules in developing its 1,200 acres at Circle C, while employing standards somewhat near SOS levels at its Barton Creek and Lantana tracts.

"The ultimate goal is to best protect the environment under the current laws that we have to operate under," Watson said last Friday during an informal press briefing in his office. Given the city's limitations under 1704, the mayor said his goal in the Stratus negotiations is to end up with a development with less impervious cover and more structural controls than are required by law.

While the Friday morning press briefing was largely kept to casual, off-the-record comments on issues ranging from light rail to Stratus to the placement of the controversial central booking facility, the mayor appeared far less relaxed when the subject of Stratus came up.

There's a reason for that. He knows he'll be dealing with the prickly Bill Bunch, the executive director and chief counsel of SOS, who earlier this year led the opposition against another city-negotiated agreement allowing longtime environmental nemesis Gary Bradley to continue building out his Circle C property. That agreement caused a huge rift within the SOS organization, resulting in former board chair Robin Rather breaking from the group and throwing her support behind the Bradley deal.

Tschurr is also chairing a newly formed group -- Stratus Information Committee, or SIC -- which will review the proposal and vote on its overall merit. Regardless of the vote, Tschurr said the group would remain an active player in the process. SIC is made up of representatives of SOS, the Sierra Club, Save Barton Creek Association and the Austin Neighborhoods Council.

Meanwhile, the City Council will spend the next couple of months gathering public input on the proposal. A tentative timeline has the council voting on the package in December.

If the deal wins approval, the vote would mark an ironic end to a 10-year, land-use battle that began during a marathon council meetingon June 7, 1990, when 800 city residents turned out to speak against this same development. Only the names and characters have changed over the years. Then, it was enviro foe Jim Bob Moffett who went before council members to try and sell them on his proposed Barton Creek PUD. Moffett is the chief executive of Freeport McMoRan Inc., which owns the world's largest gold mine in Irian Jaya, Indonesia. FM Properties was a Freeport spinoff, and in 1990, Moffett felt confident that his ties to the University of Texas, where he played football under famed coach Darrell Royal, would help him secure the council go-ahead on the PUD. He was wrong. The historic evening ended in the wee hours the next morning with the council deep-sixing Moffett's deal. (FM Properties changed its name to Stratus in 1998, the same year the state Supreme Court upheld the SOS ordinance. According to reports, Moffett no longer holds financial interests in Stratus, and the company has no legal ties to Freeport McMoRan.)

The monumental 1990 council "happening" engendered an aggressive environmental movement led by SOS, the group that successfully commandeered the campaign to put a strict water quality ordinance on the books. What began as a grassroots organization very quickly grew into a well-oiled machine that handpicked key environmental council members whom the group could depend on to deliver the votes. Today, the City Council is largely considered a majority green council.

Or is it? "They want to surrender and declare victory," Tschurr said of the council's willingness to bend over for Stratus to avoid yet another bashing at the hands of the Texas Legislature next year. "They want us to trust them on this deal because they're the green council. The truth is they don't have the courage to say 'no.'"

But city officials counter that without a negotiated agreement in place, Stratus could move ahead willy-nilly and build under far fewer constraints. The fact that the company has expressed a willingness to use stricter environmental standards is in itself a victory, the city argues.

"First and foremost we get some certainty," explained the city's outside lawyer and chief negotiator, Casey Dobson, of Scott, Douglass & McConnico. Dobson hammered out a six-page term sheet with development lawyer Richard Suttle, representing Stratus. "Without an agreement with Stratus we get one of two things: Either [Stratus] is going to develop anyway, or the property is going to be sold at face value," Dobson said. And the current proposal is not set in stone, he added, noting his belief that any opposition to the draft "will ultimately help us make it a better document. I hope people who are opposed to it will remain in the process."

Dobson says a proposed city land swap with Stratus is not on the table because the idea "did not get requisite community support and council support." But Stratus chief executive Beau Armstrong gives every indication he'd be willing to exchange his aquifer property for city-owned land at the old Robert Mueller Municipal Airport, in the heart of Austin just east of I-35. To be sure, the trade would mark a New Urban coup for Stratus, which would likely rely on development partners such as Olympus Real Estate to handle the bricks-and-mortar end of the deal. On the other hand, Mueller neighborhood participants in the redevelopment process are understandably concerned about how Stratus' entry into the Mueller deal would affect what they envision will be a pedestrian-friendly, mixed-use community. And Council Member Beverly Griffith, a key player in the Mueller plan, is said to be lukewarm on the idea, at least at this point. Another concern of SOS leaders is that city officials might get so enamored of the Mueller idea that they'd be willing to pay or trade much more than what is actually necessary.

At any rate, Stratus' Armstrong can't say enough about Mueller. "I love the idea," he said in a phone interview last week. "Be proud to take some of this density off the aquifer and move it somewhere else. We've been here a long time. I think we know the drill, so to speak. We know what we're doing, and we have the resources to make it work." By resources, Armstrong meant the necessary financing as well as Stratus' relationships with various retail and residential development companies. Stratus in turn would do the heavy lifting on all the utility requirements and deed restrictions that go into a development of this nature. "This would fit our skill set pretty well." But Armstrong is also aware of the influence the surrounding Central City neighborhoods carry in the redevelopment process. "They've worked very hard in this process," he acknowledged.

There might even be other possibilities. The total market capitalization of Stratus is about $60 million. Will the city buy? Is Stratus building, trading, or selling?