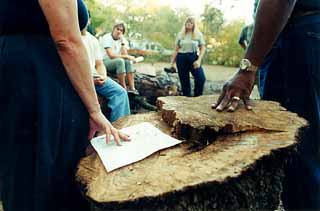 Austin's modern history of crimes against trees wends its way through the Treaty Oak arborcide of the late Eighties back to the mass murder of the late Sixties, when UT Regent Chair Frank Erwin routed a group of students out of a grove of oaks and cypresses he wanted bulldozed to make room for the expansion of Memorial Stadium. Erwin won and the trees lost in 1969. They lost again Saturday in East Woods Park, according to Austin writer Robyn Montana Turner.

It wasn't the late and beloved Erwin, but Austin Parks and Recreation, which on Sept. 31 cut down a 150-year-old tree. By Tuesday, the East Woods Neighborhood Association had four PARD officials meeting over the stump, explaining why the tree was taken out with no prior notice to the neighborhood association. Turner, who lives near the park, complained that the decision to fell the tree was made by Parks & Rec. engineer Channy Soeur, rather than an arborist. A private arborist Turner had called out to look at the tree earlier informed her it was healthy, probably in need of water, and not likely to fall. And that it was 150 years old.

At the Tuesday evening meeting in the park, members of the neighborhood association's executive board asked PARD to consult them before they cut down any more trees, to allow an arborist to provide a second opinion, and to maintain some line of communication with a representative of the neighborhood association. "They told us no," Turner said. "They even threatened the arborist I used, and said he could be held liable for giving me an opinion ... All we want is some notice. This neighborhood was known as Austin's Deep Woods. These are trees that J. Frank Dobie played in." The park is adjacent to the Dobie House north of the UT Law School.