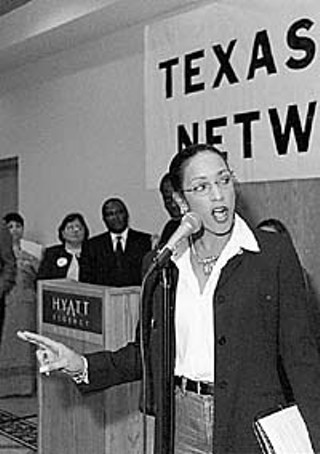 It's rare to see an Austin crowd excited about anything except football at 9am on a Saturday morning in September -- let alone yelling and cheering state politics and politicians. But such is the pull of the Industrial Areas Foundation -- the regional umbrella organization for local groups such as Austin Interfaith. And it was not only IAF leaders who were present at the Hyatt. A delegation of elected officials were there as well, including Austin's Democratic state reps Glen Maxey, Elliott Naishtat, and Dawnna Dukes, and senators Rodney Ellis, D-Houston, and Eliot Shapleigh, D-El Paso.

Organized through Protestant, Catholic, and Jewish congregations, the statewide organization's Saturday gathering was not unlike a secular church service. There were readings and recitations, personal testimonies, and the power of a crowd drawn together for a common cause.

Accountability sessions, such as the one the IAF held at the Hyatt on Sept. 17, are a chance for organized citizens to discuss issues with elected officials. They always involve the IAF publicly requesting elected representatives to support specific public policy issues. High on the IAF agenda for the coming legislative session are: job training, alliance schools, and removing bureaucratic barriers to health insurance for children of low-income families.

Considering the agenda, it's not surprising that most of the legislators present were Democrats. The IAF, however, is a non-partisan group -- which leaders lost no time in reminding politicians whose critical references to George W. Bush's compassionate conservatism became too frequent and too obvious. "IAF is not in support of politicians," one IAF speaker said from the podium. "We are in support of ideas."

Despite a crowd whose enthusiasm at times reached pep-rally levels, the standard accountability session is a no-nonsense event. Each agenda item was read and elaborated on by an IAF speaker -- and senators and representatives were called to the podium to state their support. Though each elected official was at first allowed a minute or two to expand on the item in question, foundation leaders did not hesitate to impose time limits. In fact, after roll had been called on a few agenda items, an IAF leader told the elected officials to remain in their seats unless they did not agree with the proposal in question. After 25 years of organizing, and an impressive record of successful projects -- which include funding for border colonias, alliance schools, and local living-wage initiatives -- the organization has become more efficient and less concerned with stroking politicians.

Nor did the senators and state reps seem to mind being kept in line. Several joked that the few minutes they were allowed to speak was an unexpected favor. "Usually we just say 'yes,' 'yes,'" said Rep. Rene Oliveira, D-Brownsville. "Elected officials understand the power of an organization like IAF," said Naishtat. "And they understand the pressure brought to bear on the Texas Legislature by tens of thousands of Texans who need the Legislature to do more for them and for their families."

Austin Interfaith also negotiated with the City Council to offer tax abatements to new businesses that pay living wages and provide long-term job training -- rather than courting businesses that hire only unskilled local workers and import skilled labor. Interfaith also developed and secured funding for Capital IDEA (Investing in the Development and Education of Adults), a long-term job-training program for adults that also provides auxiliary services like childcare and counseling.

What sets Capital IDEA apart from other job training organizations, according Father John Korcsmar, one of Austin Interfaith's 10 co-chairs and pastor of Our Lady of Dolores Catholic Church, is that Capital IDEA organizers talk to employers in the Austin area to find out what jobs are unfilled, and train specifically to those positions, rather than teaching a generic set of skills. "There are programs," said Korcsmar, "but they've got to be connected to a job that really exists."