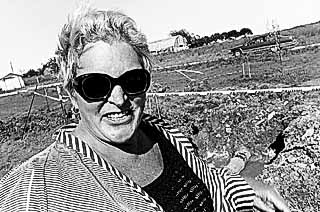 Hatsy Heep Shaffer says she never gave developer Gary Bradley permission to use the water on her land. (Photo By John Anderson)

Developer Gary Bradley's quest to complete his master vision of "Bradleyville" in southern Travis County is facing stiff opposition from a cantankerous opponent -- Hatsy Heep Shaffer, one of the owners of several large tracts of land that has been eyed by developers in recent years. Shaffer, who claims the developer has repeatedly misrepresented his ties to her land and is intending to take her water system by force, says she will file a lawsuit against Bradley. "I will never do business with that man ... ever," she says.

Documents detailing a local water supply company's effort to expand its service to Shaffer's land, along with Bradley's written proposal to build a toll road extension of State Hwy. 45, support what Shaffer calls a pattern of misrepresentation and even intimidation by the developer and others associated with his efforts.

Shaffer is an heir to the Heep Ranch, which consists of several tracts of land adjacent to Onion Creek and the I-35 corridor north of Buda. The two other Heep heirs -- Shaffer's half sisters, Betsy Urban of Dallas and Kathleen Adkins of Houston -- are also considering lawsuits against Bradley.

The sisters inherited the Heep Ranch tracts from their grandfather, Herman F. Heep, who made his fortune as an oil wildcatter and died in 1960. Shaffer's land consists of the old Heep homestead, where she spent her childhood.

Both Shaffer and Adkins say they've continually rebuffed Bradley's attempts to buy their land. But neither has the power to stop him from purchasing a 2,000-acre tract east of I-35 owned by the Herman F. and Minnie Heep Foundation at Texas A&M, which was established by their grandfather. The foundation appears to be in favor of the sale. Bradley's proposed toll road would head straight through Shaffer's property along FM 1327.

"I intend to stop Gary Bradley. ... I believe this is part of what he's always done, a back-room smoky deal ... to get property, water, and a computer chip plant built there," Shaffer says. "No one will take Herman Heep's water."

Adkins is more low-key in her verbal assaults on Bradley, and says she knew little about the developer until she did some research into his development record. She didn't like what she found. "I would never do anything with Gary Bradley," she says.

Bradley's plans, which arose from his recent legal settlement with the city of Austin, include Spillar Ranch -- about 2,500 homes, a large commercial complex, and a golf resort southwest of the existing Circle C development at the southern terminus of MoPac. The state is working to extend SH 45 east to FM 1626; Bradley's proposed toll road would extend it all the way across I-35 to US 183, providing his developments with convenient access to I-35, MoPac, and the airport. Further development east of I-35 could include more residential and commercial space and, if Bradley has his way, a major high tech employer.

Bradley did not return several phone calls to his office, but written documents reveal the developer representing himself as a business partner of Shaffer's, even though the only agreement between the two was an informal letter of intent to discuss a development deal. Bradley's application to the Texas Turnpike Authority to build the SH 45 toll road states, "One of the heirs has formed a partnership with Mr. Bradley for the immediate development of one-third of the property."

Shaffer says Bradley has made the same claims to the Heep Foundation, the Hays Co. Independent School District, and others. She also says Bradley has wrongly assumed that the Heep heirs would give him easements to the toll road along FM 1327 for free -- cost savings which he then included in his application to the turnpike authority.

Furthermore, the three Heep heirs believe Bradley is in cahoots with the owner of the area's water supply corporation to take Shaffer's water. The Heep Ranch has a well capable of producing and holding a large quantity of water, including a 250,000-gallon storage tank. Shaffer believes Bradley is after her entire system -- water, pumps, storage and all.

Bradley's name is sprinkled throughout documents from a local nonprofit water supply company -- Creedmore-Maha -- which applied to the Texas Natural Resources Conservation Commission to expand its service area to cover all the Heep tracts. A June 23, 1999 letter to Adkins from the company's attorney, Mark Zeppa, requests easements from the Heep heirs to put water lines on their property. The request states, "As a Texas Water Code Chapter 67 water supply corporation, Creedmore-Maha has the legal power to condemn the easement for the Heep Ranch ... Creedmore-Maha has been contacted by Mr. Gary Bradley and his development group concerning water service to the Heep Ranch Property. He is aware of our need for these easements and [has] agreed to assist in our acquisition efforts."

Chapter 67 doesn't mention condemnation, but Zeppa says public water supply corporations do have the power to condemn property, and a spokesperson for the TNRCC confirmed that claim. Section 11.035 of the Water Code states that corporations may take "rights-of-way over private land and may obtain the land necessary for pumping plants, intakes, headgates, and storage reservoirs by condemnation."

Zeppa says Creedmore is not after the Heep water. And he says there is nothing unusual about having Bradley work toward getting easements, since it's incumbent upon developers who want water lines to pursue easements from property owners.

Adding to the mess is a new water dispute between Shaffer and Creedmore-Maha's president, Charles Laws. Shaffer discovered documents showing that a 12-inch water line owned by Creedmore-Maha ran inside her fence line and even connected to the Heep lines fed by her wells. In an effort to physically prove what she found on paper, Shaffer went out with an engineer and a backhoe last Sunday, Sept. 24, to dig up the lines. "We nicked one of Mr. Laws' lines, which he illegally has on my property," she says. That "nick" forced Creedmore-Maha to shut off service to thousands of customers until the problem was fixed, and Laws showed up with a sheriff's deputy to register his complaint. The deputy told the parties to get the problem fixed and get the water service going again. But Shaffer says to do so required her to turn her water lines back on, which further increased her suspicions that Creedmore-Maha had been using her water.

Dennis Dorsett, a contractor who builds and repairs water lines for both Laws and Shaffer, says it's true that Creedmore-Maha lines run inside the Heep Ranch and connect, so it would be theoretically possible for the supply company to take the ranch's water. But he says he doesn't believe Creedmore-Maha ever did so, especially since the Heep water doesn't meet treatment standards for a public supply company. Laws denied Shaffer's claims that he's been taking her water, adding that he has an easement for the water line on her land. His attorney, Zeppa, supplied a copy of the easement, a 1991 agreement made by Shaffer's stepmother, Minnie Bell Heep.

Zeppa said that Creedmore-Maha serves four counties, getting most of its water from six wells, but also buying water from the city of Austin and Aquasource. He added that the corporation is pursuing a contract to buy water from the Guadalupe-Blanco River Authority to meet the demand for growth along the I-35 corridor.