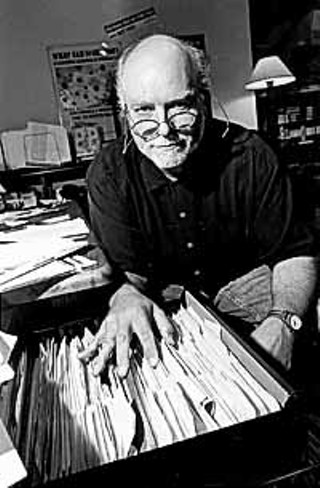 On Monday, the Texas Attorney General announced a lawsuit and settlement with living.com, which prevents the company from releasing personal information about its clients while it goes through the U.S. Bankruptcy Court. The move, said the AG's press release, was made "on behalf of Texas consumers to enforce and restore their privacy rights."

But just last month, Cornyn tossed privacy rights aside when he filed a subpoena in U.S. District Court against Texans for Public Justice, an Austin nonprofit. The subpoena demanded that TPJ release a massive amount of information, including payroll stubs, to Cornyn's office. And TPJ wasn't even a party to the lawsuit under which Cornyn was seeking the subpoena.

Cornyn was roundly criticized for the subpoena of TPJ. Luckily for him, he won a reprieve Wednesday morning, when U.S. District Judge James Nowlin dismissed the lawsuit, which was filed by the Gray Panthers and Public Citizen as part of their efforts to reform the state's judicial system. The suit claimed the state's method of electing judges is unconstitutional because it allows judicial candidates to take money from lawyers and others with cases pending in the courts those same candidates are seeking. Nowlin's dismissal disappointed Public Citizen state director Tom Smith, who said the group will appeal the ruling. "We always felt this case would be decided at the appellate or Supreme Court level," he said.

Cornyn has shown chameleon-like shifts on privacy ever since he took up residency in the Price Daniel building. On Saturday, Cornyn told attendees at a Freedom of Information Foundation of Texas luncheon that "We have a right to say how the government should behave because government is elected by the people."

Of course, Cornyn didn't say exactly who "we" are. Which may explain why he wasn't so keen on open government six months ago, when he acted to protect the privacy of big corporations who gave big money to the Republican Attorney Generals Association, a soft-money arm of the Republican National Committee. On March 24, executives from companies like Microsoft, SBC, Sprint, GTE, and Aetna paid up to $25,000 to attend a covert confab at the Barton Creek Resort, during which they rubbed elbows with Cornyn. But when questioned about how much those companies -- all of which are potential regulatory targets for Cornyn's office -- gave to RAGA, Cornyn, the stalwart defender of the public's right to know, decided "we" didn't have a right to know after all. Reporters who called Cornyn's press office were referred to Cornyn's political office, which refused to answer any questions about the RAGA event.

Then, in early April, just three weeks after the RAGA fundraiser, Aetna and Cornyn's office announced that they had settled the lawsuits the agency had pending against two Aetna companies: Aetna U.S. Healthcare Inc., and Aetna Health Plans of North Texas Inc. The state sued the two companies and four other health maintenance organizations for allegedly making contracts with doctors that encouraged the doctors to limit medically necessary care. The suits were among the largest legal challenges ever made against the managed care industry in Texas history. The settlement deal required Aetna to pay no penalties, as long as the company would promise, really promise, that it wouldn't break the law anymore. Taxpayers, meanwhile, paid the full cost of the state's investigation.

Cornyn's harassment of TPJ may have been his most egregious anti-privacy move yet. On August 18, Cornyn subpoenaed TPJ's records because their reports were part of the Gray Panthers and Public Citizen lawsuit. The dismissal of the case makes moot Cornyn's subpoena of TPJ. But although it "stops Cornyn from using the suit as a political tool to pursue his political enemies," said TPJ director Craig McDonald, "it won't stop Cornyn from abusing his power in the future."