Volente debates incorporation as a means of escaping Austin's extraterritorial jurisdiction, and its development rules. 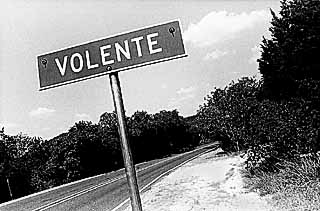 Way out yonder by the lake, Volente, like everywhere else around here, is changing. What vexes the locals now is how to respond: Should Lake Travis become home to the incorporated Village of Volente? Or should everyone leave well enough alone?

On August 15, proponents of Option A formally petitioned Austin, whose extraterritorial jurisdiction (ETJ) includes Volente, to allow an election on incorporation. This would require Austin to release Volente from its ETJ so that the new town, if there is one, could institute whatever development controls, or lack of same, it pleased within its boundaries. Since those boundaries include steep slopes poised directly over drinking water, next to an endangered species habitat, linked to the city by winding two-lane roads, the city is not likely to let Volente go lightly.

Especially since the proposed Village is not the old hippie hamlet we know and love, but rather a master-planned community of the future. Much of the two-square-mile area of the proposed village -- that being the maximum size, by state law, for such an incorporated place -- is undeveloped; much of it is owned by the largest landholder on the north shore, the Volente Group, which has worked for months to address neighbor concerns and build consensus for its Village vision.

A developer has proposed that Volente, a Lake Travis-area community best known for its marinas and water parks, be released from Austin's extraterritorial jurisdiction (and thus its environmental-protection and land-use laws) and allowed to incorporate as the Village of Volente. The area in question is just two square miles, more than half of which is vacant land proposed for residential development by the Volente Group.

The incorporation drive has now been taken over by a group of supportive residents, organized as Save Our Volente. In a letter to Austin City Manager Jesus Garza, the Group's John Shipley envisions large-lot homes, a "traditional neighborhood development element," a "Main Street village" and other shiny things. (Some of the homes have already been built, though not in a TND, which seems an odd conceit out here where walking from place to place is nigh impossible.) The Group and residents, Shipley continues, "have concluded that, with the cooperation of the City of Austin, Volente can incorporate as a village, provide services to its residents without negative impact on the City of Austin, and ensure a planning concept which is consistent with the environmental and planning goals of all concerned."

Hardy-har-har, say opponents. Some object to a new layer of government (this is western Travis County, after all) and the loss of certain services (such as road maintenance or "free" EMS service) now provided by the county. Others object to what they see as an environmentally hostile developer gimme -- a "safe haven" where the Volente Group can skirt Austin's onerous rules. It is often posited that Austin would require Volente to adopt the city's own codes for the village, but the city, with its billion-dollar budgets, has enough trouble enforcing its own rules. "If Volente adopts city codes," says resident Walt Thompson, "what have you changed, except having the work done by people who've never done it before?"

Even more Volenteans, who may be neutral or supportive of incorporation -- which has been contemplated in fits and spurts for years -- are irked beyond measure that an election would be limited to the 250 or so people now living in the Volente Group's village-to-be. A new village would have its own half-mile ETJ, so much of old Volente could end up subject to the authority of neighbors who they may know but for whom they didn't vote. (Given the two-square-mile limit, one option being discussed is for old and new Volente to incorporate separately and simultaneously and then merge, which is what Lago Vista did back in the day.)

However, as Volente residents know, Austin's current record of enforcing its will in the ETJ ain't quite so hot. Witness the ever-expanding Volente Beach Club entertainment complex (outside of the proposed village boundaries), which has flouted city, county, and neighbor wishes with scant consequences. Pro-incorporation forces "use the Beach Club as an example of the horrors that will happen," says Thompson, "even though incorporation won't do anything about the Beach Club." If they try, he continues, "the Village will last as long as it takes for Volente Beach to file the first lawsuit."

This isn't going to be decided next week. The Save Our Volente petitioners (and their legal advisors, including the omnipresent Richard Suttle), have read the state Local Government Code differently from incorporation opponents (and the city of Austin), and argue that Austin must respond to their request within 45 days or call an incorporation election by default. In the opposing view, Austin has no time limit for deciding when or if to release Volente from the ETJ, and before the village can vote to incorporate it must petition the city to be annexed, which will likely never happen. (But it is possible that the city could do a limited-purpose annexation, or "LP," allowing for planning and zoning, which Austin has already done almost all the way to Volente.) Even if the city goes along, it could be next May before Volente has a vote.

That is, whoever "Volente" is at that point. "It's not just new Volente vs. old Volente," says resident Roger Shull. "There are some new people and some older people who want incorporation at any cost. They want their own post office, and the new people want a gas station and a Starbucks and a bakery" in the Volente Group's proposed Main Street.

"So far," says resident Cat Smith, "a lot of this has been driven by the fear of Austin coming." The pro-incorporation literature asks "Do you want to be a citizen of Austin or a citizen of Volente?" -- "as if those were the only two choices," Smith continues. "I personally would be quite happy to be in LP, and others are happy just as we are. I don't think people have been told what is broken that incorporation would really fix."