The City Council is nearing an agreement with Lumbermen's Investment Corporation over the disputed boundary of the Sand Beach Reserve north of Town Lake. The city will let Lumbermen's build its condo project up to the southern edge of the disputed site; in return, the corporation will build a road to the disused Seaholm Power Plant and pay for other improvements. (By Doug Potter)

In what was essentially the same kind of parks-vs.-roads standoff that Mayor Watson and Council Member Griffith have been staging for months, the City Council voted down a proposal Tuesday which would have diverted funds now budgeted for roads to projects like park maintanence and housing, as it approved the $1.8 billion city budget. Mayor Pro Tem Jackie Goodman proposed removing $9.28 million from the budget's new Sustainability Fund -- money that City Manager Jesus Garza wants to spend to finish the South First Street road project -- and instead using funds from the $150 million in transportation bonds on the November ballot (assuming they pass) to pay for South First.

Out of that $9 million, Goodman proposed allocating $3 million to build a park in the Colony Park area of northeast Austin and $1 million to the Community Action Network. The rest would have been used to pay for affordable housing, park maintainence, and the purchase of environmentally sensitive land in the Drinking Water Protection Zone (see "Green Acres," p.22, for more on parks funding).

Although Goodman's amendment specified that if the bonds aren't passed in November, the Sustainability Fund would be used to pay for Garza's roads projects, other council members were wary of counting on money from bonds which haven't yet been passed. Watson, along with Council Members Daryl Slusher and Raul Alvarez, also opposed the proposal because an agreement passed by the council in January guaranteed that the city wouldn't make changes to cash-funded programs like South First Street without the approval of all related city departments and a meeting of the council.

So despite the best efforts of Goodman, backed by Griffith and Council Member Danny Thomas, the amendment was voted down and the Operating Budget passed with the Sustainability Fund intact.

"I think everybody felt that these were very important programs," said Goodman after the final budget hearing, "but when you consider that it's going to take $3 million for one park in Colony Park, there's just not enough funds."

Goodman's phrase, repeated again and again by council members throughout the budget discussions, seems a strange one for a city so conspicuously booming. Raising property taxes could bring in the funds the council wants so badly, but Watson made clear what a touchy subject he considers that to be when he defended the budget's tax rate -- $0.4663 per $100 valuation -- as "still the lowest of any large city in Texas."

By divvying up an extra $5.4 million that Garza found at the last minute, the council did manage to repair some slights to a few neglected programs. Neighborhood Planning got funding to hire additional planners, a change for which Goodman had been pushing. And the much-neglected Health and Human Services Dept. got an additional $1.2 million; the original draft of the budget had called for a spending increase of just 2.8%, below the average departmental increase. 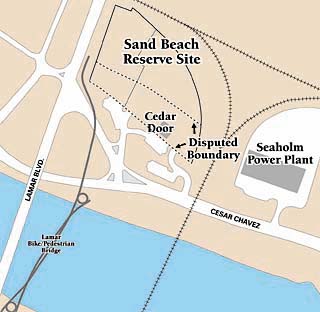 The City Council is nearing an agreement with Lumbermen's Investment Corporation over the disputed boundary of the Sand Beach Reserve north of Town Lake. The city will let Lumbermen's build its condo project up to the southern edge of the disputed site; in return, the corporation will build a road to the disused Seaholm Power Plant and pay for other improvements.

On the flipside, in a trend of giving to those who already have plenty, the Austin Police Dept. -- already allocated a 10% increase in a budget that previously totaled some $100 million -- got another $650,000 for a police helicopter.

The disused Seaholm Power Plant, whose restoration -- as a science and technology museum or otherwise -- has been a pet project for council members and local preservationists alike, may be one step closer to realization, but at a price.

Lumbermen's Investment Corporation, the defendant in a lawsuit brought by the city last December, has stepped up to the table with a proposed compromise over the disputed strip of land north of Town Lake known as the Sand Beach Reserve. Years of debate have centered on where the boundary between Lumbermen's property and the city's lies -- in rough terms, does the line lie north or south of the Cedar Door bar?

After consultation with city staff and the Roma Design Group -- the consulting firm hired by the city to advise on development in areas including the former Mueller Airport and the Town Lake Corridor -- Lumbermen's is proposing that the city allow them to build their condo project to the southmost edge of the disputed strip of land. In return, they will build a road for Seaholm on what is indisputably their property, as well as paying associated costs like buying the right of way for the road from Union Pacific Railroad for half a million dollars and paying for street landscaping and a public park in front of Seaholm.

Seaholm's parking problems have plagued the project from its conception. Advocacy groups like the Friends of Seaholm want to see the building, unused since 1984, put to public use. A public survey conducted by the Seaholm Reuse Planning Committee showed that the public favored using the building as a science and technology museum or as a performing arts venue.

Whatever ultimately becomes of Seaholm, all parties involved say they hope to make it a destination for people throughout the city and beyond. But where will they all park?

Lumbermen's proposed road would provide parking near the site, but the many of the same residents who support Seaholm's redevelopment are opposed to the proposed condos, and the settlement of the lawsuit.

As a whole, the council rushed to reassure anxious citizens that a proposal to discuss the settlement, which passed last week on first reading only, was made only as a framework for further negotiations. "This is not an approval," said Council Member Beverly Griffith. "It is not an acceptance. It is not final. It is a chance to get this out of the back room." Council members were also quick to point out that refusing to settle the lawsuit with Lumbermen's would not stop the condos from being built, or preserve the Sand Beach Reserve from development.

Lumbermen's had set last Thursday night, Sept. 7, as their deadline for negotiation; if the council had not agreed to discuss a settlement, they said, they were prepared to let the lawsuit proceed.

And even a victory in the lawsuit would be a loss for the city. Not only would Lumbermen's be free to build what they chose on what remained of their property (proposals included either the condos or a 15-story office building), but there would have been no road for Seaholm.

Lumbermen's will meet with city staff and Roma to come up with a more complete outline of their proposal for presentation to the council on Sept. 28, the same day that ROMA will present its Seaholm District Master Plan. Two weeks will then be allotted for public hearings before a final vote is made on Lumbermen's plan. "To have an outline is an appropriate step," Mayor Kirk Watson said. "That will then lead you to something you can vote up or down. This is the next step."