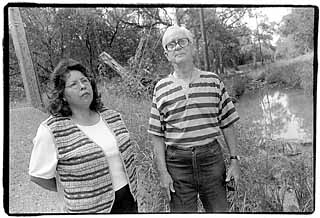 Annabelle Torrez and Hugh Moore worry that a proposed 500-unit condominium complex will destroy the rural character of their South Austin neighborhood. (Photo By John Anderson)

One sweltering afternoon a couple of weeks ago, three South Austin neighbors -- Hugh Moore and Mike and Annabelle Torrez -- made their way through a tangle of brushy scrub, past a few old tires, a rusted car frame, and a cactus plant blooming defiantly under a merciless sun. They came to a stop at the edge of an empty pond. "It's been dry for a while now," Mike Torrez said, pointing to a large, dusty crater. "But there's a guy who lives over there who sets out tubs of water for the deer."

Deer? In South Austin? "I heard one snort the other day," Torrez said. "So I know they're still back here." The trio set off again across the rustle and crunch of dry tinder, and their conversation turned to something of greater concern: A 500-unit condominium project is planned for this 48-acre spread of vacant land that their neighborhood has grown up around over the past 30 years. Moore and the Torrezes, longtime residents of the Cherry Creek subdivision, are part of a core group of South West Austin Neighborhood Association representatives opposed to the size and scope of the new condo subdivision, to be built between Manchaca and West Gate Boulevard, just south of West Stassney Lane.

As developers see it, the vacant property is the proverbial hole in the doughnut, waiting to be filled. As the neighbors see it, the site plan doesn't follow the spirit of the original 1980 plan, which called for a sort of mini-Sun City for "mature" adults -- until it was scrapped altogether when the real estate bust hit in the late Eighties. This time around, the buildings are taller -- three stories -- and the condos, at least initially, will be leased to tenants instead of sold to individual owners. The residents, meanwhile, are weighing their limited options while the developer, CNC Investments, and its local representative, Bury and Partners, are finishing a revised site plan to be submitted to the planning department in the next week or so. At any rate, they don't expect to break ground on the project until next spring.

No matter how the project shakes out, the neighbors have accepted the fact that the property will be developed. On a broader scale, there are similar vacant tracts scattered all across this sleepy corner of South Austin, meandering from West Gate to I-35, and from U.S. 290 to just south of Stassney. Those properties, too, will be slated for development, if they haven't been already.

Why the sudden attraction to an area of town that served, in its natural state, as the nondescript centerpiece of Richard Linklater's Suburbia? Because this land of aging strip centers, vacant lots, scrap dealers, and fix-a-flat shops is now prized ground for developers angling to make some money off the city's newly designated Desired Development Zones.

For decades, the landscape has stood as gray and unchanging as cobwebs. But suddenly, residents are seeing their neighborhood change from status-quo funky to middle-America gentrified. All this fast and furious change is hard for the old-timers to accept. "This is the first time we've been inundated all at once," longtime SWANA co-president John D. Gamble complained the other day. "There's construction all over the place."

It's true: Not since the Sixties and Seventies has this sector seen such a frenzy of site work, construction trucks, and traffic. Consider these recent and ongoing enterprises: 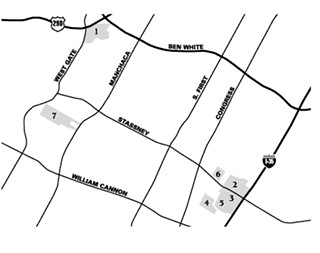 Developers have discovered far South Austin in a big way. New projects include:

2. Lowe's and Albertson's anchor Trammell Crow's "power center" at I-35 and Stassney.

7. The 500-unit Independence Park Condominiums are planned to cover 48 acres of what is now scrub brush and tinder, stretching from Manchaca to West Gate Blvd.