Plans for the Bennett tract, potentially a major economic blockbuster for East Austin, are still ongoing and may include small retail, offices, and some residential. 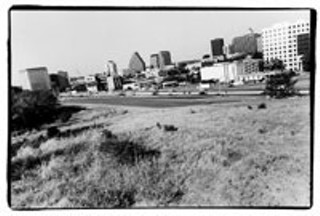 The Bennett Tract, which overlooks downtown Austin across I-35, is considered one of the most valuable undeveloped plots of land in Central East Austin. (Photo By John Anderson)

The latest news on the commercial venture planned for the Bennett tract, potentially a major economic blockbuster for East Austin, is that negotiations between the developer and neighbors are ... continuing, and that prospects for a buildable project are ... uncertain, as they have been since ... 1986. But that's good news, all parties agree: As long as the talk continues, the City Council doesn't have to get involved. The council prohibited local development firm Riata, which proposed a mixed-use office park for the property last spring, from building the project until Oct. 16, giving Riata and the neighbors time to work out their differences.

Riata and neighborhood leaders would rather strike a deal than force the council to choose between their competing interests, but unfortunately, even the neighbors admit that their demand for a residential component threatens the project's viability. No one is ready to cry "deal-breaker," but some say the city may have to help out financially for everyone to get what they want. If no agreement is reached, the council might feel compelled to re-zone the eight-acre tinderbox according to a low-density plan recommended by city staff, inviting a lawsuit from the California investors who paid a premium for the tract 15 years ago expecting to build a shopping mall.

The tract, named for Delbert Bennett, the real estate broker who thought he'd found gold on the hills overlooking downtown from just across I-35, is likely the most valuable swath of undeveloped property in the center city. From atop the ridge on the northwest corner, bounded by East 11th and the interstate frontage road, a person can practically look the portrait of former Texas governor Jim Hogg in the eye through the Capitol dome windows. The south end of the property affords a view all the way down Seventh Street toward the Hill Country beyond.

Riata Development is proposing a mixed-use office park on the eight-acre Bennett Tract (light gray), across I-35 from downtown. Most of the properties surrounding the tract are zoned for resdential use. Neighbors worry that a new zoning overlay (heavy black line) will destroy the historic character of the area.

Bennett persuaded the City Council in 1991 to zone the property for a million-square-foot shopping center, but then mysteriously failed to break ground within a two-year deadline, and the council closed the gates. Since then, an East Austin master plan has changed the priorities for revitalization along the East 11th Street corridor: Residential and small retail development are now considered more respectful of the historic Guadalupe neighborhood. But Riata principal Matt Mathias, who holds an option to buy the land, says the exorbitant price tag (it's said Bennett paid as much as $50 per square foot for the property) means residential uses won't pay on the property.

Nevertheless, Riata is attempting to thread the needle of East Austin politics by agreeing to build a substantial number of three-story apartment buildings and town homes. Mathias says he's confident that months of meetings with neighborhood leaders will pay off with a mutually agreeable plan, which he says is about 80% complete. With help from city planners, Riata and the neighbors have already agreed to a list of guiding principles for the tract's development, including provisions for open space, affordable housing, underground parking, and traffic barriers. But some intransigent details are still unresolved.

Mark Rogers, a longtime member of the Guadalupe Association for an Improved Neighborhood (GAIN), which fought Bennett's shopping mall in the early Nineties, says Mathias still wants to place a hotel and office buildings where the neighborhood wants a residential buffer, primarily at the southern end of the tract. "It's not the quantity of the residential, it's the location of it," Rogers says.

Architect and Guadalupe resident Tom Hatch says he believes Mathias is in a bind that only a city subsidy package, perhaps like the one offered to the developer of the Triangle in Central Austin, can resolve. "There's very likely not going to be an acceptable solution given the costs of the land unless there's government involvement to subsidize the housing," says Hatch. Establishing a tax-increment financing district is one option suggested in the guiding principles, but TIFs, in which taxing entities agree to allow a portion of property taxes to be invested in infrastructure improvements, are currently out of fashion in Austin.

Van Johnson, director of the East Austin Development Corporation, an arm of Ebenezer Baptist Church, says he's more hopeful that Mathias's project will soon get off the ground. Ebenezer owns most of the land immediately east of the Bennett tract across San Marcos Street. But unlike GAIN, the church's primary vision for the Bennett tract has always been about generating jobs and investment, not housing. Ebenezer supported Bennett's shopping mall in '91, and Johnson says the church remains disappointed that the window of opportunity for a Nordstrom's in East Austin has passed. Johnson says Riata's proposal is "not the major economic engine that we envisioned," but that he's pleased that Riata is courting high tech employers who the church hopes will hire and train East Austin residents. He says the development "will signal to the financial world that you can make a major investment in East Austin ... without being at risk."

Mathias says Riata has never used city subsidies in previous developments and would not advocate for them on the Bennett tract, but he might not refuse them if they were offered. "We would need guidance from the neighborhoods to see how that works," he says. He adds that even if he and the neighbors don't agree on every detail, he'll likely be pitching a proposal to the city in October. "I want it to enhance the neighborhood, but be acceptable to us," he says. "Council will have to decide whether we tried hard enough."