Prying Open the Case of the Missing Door 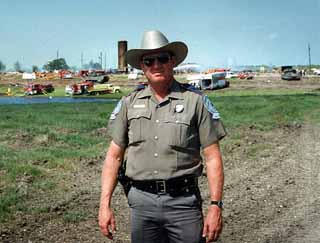 Like a sentry, the left-hand door from the ruins of Mount Carmel stood guard. The battered, bullet-ridden door, introduced into evidence by government lawyers, had a brief starring role in the trial. After that day in the limelight, it was placed against the left wall in Judge Walter Smith's courtroom, where it stayed for the rest of the trial. And even though the left-hand door did not return to center stage, questions about its twin -- the adjoining right-hand door, which hasn't been seen since Mount Carmel burned to the ground -- kept bubbling to the surface.

On June 26, a trooper with the Dept. of Public Safety, Sgt. David Keys, took the witness stand. Keys guarded the entrance to Mount Carmel on the afternoon of April 19, 1993. He told the court about directing traffic and stopping the fire trucks from the Bellmead Fire Department, preventing them from fighting the fire that was engulfing the Davidians' home.

But when Keys began discussing a large U-Haul truck that drove into Mount Carmel shortly after the fire began, government lawyers objected. A bench conference in front of Smith followed, and plaintiffs' lawyers were told to quit asking about the U-Haul. The Davidians' lawyers say Smith did not explain why they could not ask Keys about the truck or what he saw being loaded into it.

In Keys' videotaped deposition, a copy of which was obtained by the Chronicle, the trooper testified that he saw two men loading a large object into the back of the U-Haul truck that later left Mount Carmel a few minutes later. "At one time, there was two of them that were working together, carrying something large," said Keys in his March 8 deposition. "They came from where the building used to be, and they put it in the back of that U-Haul."

Jim Brannon, one of the lawyers for the Davidians, asked if the object was as big as the door leading into the room where they were sitting. "It was that big or bigger," replied Keys.

Questions about the missing right-hand door are important, for they go to the credibility of the FBI's handling of the ruins at Mount Carmel in the hours after the fire. The Texas Rangers didn't take control of the ruins until about 6pm on April 19, or about six hours after the fire started. Conspiracy theorists have argued that the government purposely hid the right-hand door because the bullet holes in it are proof of the high number of bullets fired into the compound. Earlier in the trial, Houston attorney Dick DeGuerin, who went inside Mount Carmel during the siege, testified that all of the bullet holes he saw in the doors were on the right side, and all were made by incoming rounds.

Long before the fire, the Davidians were discussing the evidence contained in the doors. During the siege, in a phone conversation with the FBI, Steve Schneider, one of Koresh's main confidantes, told FBI agents that "the evidence from the front door will clearly show how many bullets and what happened." Since then, there have been plenty of allegations made about the missing door. During the trial, Michael Caddell, the lead attorney for the Davidians, told reporters, "The fact that the left-hand door is in the condition it's in tells you that the right-hand door was not consumed by the fire. It was lost on purpose by somebody."

In his deposition, which wasn't seen in court, Keys testified that the U-Haul stayed at Mount Carmel for about half an hour and then departed. Bolstering his testimony is a photo that was taken of Keys on duty at the site. The photo, taken by one of his fellow troopers, clearly shows a half-dozen fire trucks working at the site. It also shows the U-Haul truck directly over Keys' left shoulder. The photo shows the time on Keys' analog wristwatch as 3:55.

Keys also said that when the U-Haul departed Mount Carmel, it didn't turn to the south on EE Ranch Road, the direction from which it came. Had it turned south, it would have gone past the media checkpoint where dozens of reporters and cameras were waiting. Instead, the truck carrying the mysterious cargo went north. Asked if he wondered why the truck didn't go past the media trucks, Keys replied, "To me it was that they didn't want to bring attention that something had come from where the remains were."

Did Keys see federal agents load the missing door into the U-Haul? Did federal agents purposely hide evidence from Mount Carmel in the hours after the fire?

Byron Sage, the retired FBI agent who was one of the agency's chief negotiators during the standoff, dismisses Keys' testimony. He says the U-Haul was probably collecting some of the equipment that the FBI's Hostage Rescue Team had been using at Mount Carmel, like lights and speakers. "My best guess," said Sage, is "there was a lot of technical equipment deployed in that area that would have been retrieved. My sense, and I'm confident of it, is that there was nothing sinister going on as to any items removed from the crime scene." So where did the missing door go? "That's the mystery of the moment," said Sage.