Was Justice Denied in Waco? 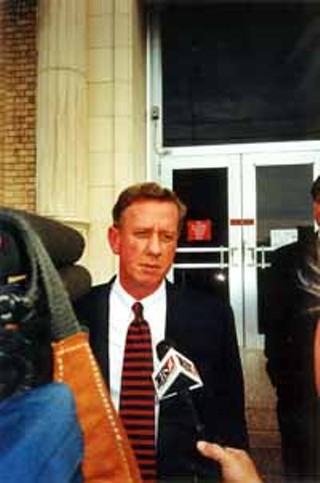 Michael Bradford, the U.S. attorney who served as the government's lead lawyer on the case (Photo By Robert Bryce)

The verdict came too fast for it to be anything but an acquittal. The five jurors left the courtroom about 12:30pm. Little more than two hours later, they had a decision. And while the verdict itself -- which found the federal government innocent of wrongdoing in the Branch Davidians' $675 million civil suit -- was not surprising, the manner in which it was delivered was emblematic of the four-week trial that ended last month. Customarily, jurors file into the courtroom, the judge asks for their finding, and the presiding juror reads the verdict. But after days of testimony, hundreds of exhibits, and numerous witnesses, the jury didn't bother to come back into the courtroom. Instead, they went home. "The jurors have informed me that it is their unanimous decision that they have no desire to talk to anyone, attorneys or news media," said U.S. District Judge Walter Smith Jr. "They have already left the building and won't be available." Smith squinted at the paper in front of him and several seconds ticked past before he broke the silence: "I can't read the name of the presiding juror."

Thus, after seven years of waiting for a trial to answer key questions relating to the bloodiest police conflict in American history, the public and the press were forbidden to question the jurors or even learn their names. Smith wasn't required to bring the jury into the courtroom -- in fact, he had empaneled them only as an advisory body, meaning he could have disregarded its finding. But the disappearance of the jury at the end of the hotly contested civil case added yet another measure of ambiguity to the Waco controversy. It hardly needs any more.

Federal officials savored the verdict. "This terrible tragedy was the responsibility of David Koresh and the Branch Davidians, not the federal government," the Justice Department said in a statement. "We are pleased the jury affirmed that view." FBI Director Louis Freeh said, "The significance of the jury's findings to the courageous federal law enforcement officers who have had to absorb unproven allegations and public criticisms for all those years cannot be overstated. An enormous burden has been lifted from them and their families."

While the government reveled, the plaintiffs grumbled. "The biggest outrage is, we had experts from everywhere, and Judge Smith wouldn't let us put them on," said David Thibodeau, one of just nine Davidians who escaped from the burning ruins of Mount Carmel. Nor could his lawyer, former attorney general Ramsey Clark, put on many of the witnesses or evidence that he and his investigators spent years developing. "We had seven years of investigation on this case and spent millions of dollars on it and we couldn't present a case," said Thibodeau. Like many other Davidians, Thibodeau never believed they were going to get a fair hearing in front of Judge Smith. After the trial, those feelings have only grown stronger.

The Davidians point out that they were not allowed to present evidence regarding: