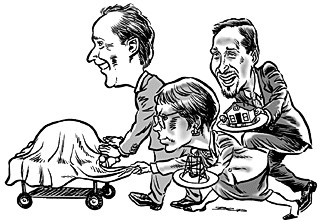 Most of us can remember saying something clever as a child that made a roomful of adults laugh, only to see our triumphant aphorism totally abased when an artless younger sibling began repeating it minutes later. Last week, Mayor Kirk Watson must have flushed when Council Member Beverly Griffith proposed adding a $100 million bond election for new parks to the same November ballot that will carry Capital Metro's light rail referendum and the mayor's $150 million bond package for road improvements, bike paths, and sidewalks.

See, we already did the big public investment thing back in 1998, when we passed $100 million in bonds for watershed and parkland acquisition. Now the mayor and council have moved on to more impressive feats, but Beverly still wants to play with her little kid's toys.

Not that plenty of others don't want to play along. Parks advocates and neighborhood leaders talked well into the night Thursday about what good business it is for the city to have good parks, and soccer fans bemoaned the current shortage of playing fields. Griffith said that her proposal, which specifies that $35 million be used to develop destination parks on the Eastside but leaves another $65 million open for hike-and-bike trails, watershed conservation, and other greenspace preservation, would secure quality-of-life amenities to counterbalance the city's economic growth. "We need the power to seize the opportunities when they come," said Griffith, referring to the city's dwindling options to purchase land. "Every day we have more development pressure on things we treasure."

Griffith's proposal was supplemented by a $25 million bond proposition from Council Member Raul Alvarez that would be used to develop housing for lower-income residents. Like the parks advocates, the affordable housing crowd enthusiastically endorsed the public commitment, noting that people, as well as trees, need protection from the real estate boom.

But Griffith and Alvarez had the mayor and other council members -- who will have to decide by August 17 which bond propositions to include on the November ballot -- squirming in their seats. The city already needs to spend over $60 million to maintain and repair the parks it has, Watson pointed out. Plus, Griffith's bonds can't be issued, without raising the tax rate, until after the city's 1998 bonds are retired in 2005. How could we plan acquisitions when no money will be available for five more years? (Griffith counters that the city has $55 million to $80 million in unspent bonding capacity that's already available.)

Council Member Will Wynn says he agrees that parks and housing are crucial issues, but adds that he wants to find financial resources that can produce results sooner. "Frankly, I think it's a little silly for us to be debating in the next two weeks how we want to use funds beginning in 2005," he says.

Now, some may find it ironic that the City Council is suddenly concerned with finding immediate dollars for equity initiatives when other initiatives which have been touted as potential contributors to the housing trust fund -- such as downtown investments and the proposed lease of Lake Walter E. Long parkland to a hotel developer -- probably won't return any revenues much before 2005, if then. Griffith also points out that unlike that revenue, which can't be permanently obligated to the public trust, a bond sale will keep on giving long after present council members are back in their civvies. "Other than through a bond obligation, you can't tie the hands of a future council," says Griffith's aide, Jeff Jack.

Between now and Aug. 17, council members will attend workshops to explore the various financing tools available to address low-income housing. Meanwhile, Wynn says he hopes that a private fundraising drive spearheaded by a coalition of S.O.S. leaders, real estate interests, and the Hill Country Conservancy could start buying land for conservation within the year. Some may argue that private efforts like these preclude the need for a public bond election, but on the other hand, the benefactors may insist that the city match their donations with bond dollars.

Plaintiffs who sued the city over alleged police misconduct during the violent 1995 Cedar Avenue incident will get another chance to revisit the settlement they won from the city in 1998. The council voted 6-1 to renegotiate the agreement after hearing complaints from plaintiffs that the $710,000 award the city handed over to fund scholarships, business enterprises, and other community investments in the 78702 ZIP code had become mired in red tape. The plaintiffs' attorney, Jimmie Brown, said the nonprofit established to distribute the settlement award, the Austin First Step Corporation, had devised qualifications for distributing the money that his clients never agreed to, including a provision Brown says gave the corporation only two years to distribute the money, after which the city could withdraw the reward. So far, First Step has awarded about $130,000 of the settlement, with another $151,000 in scholarships pending.

Assistant City Manager Marcia Conner said the city never had any intention of withdrawing its award money. And Council Member Daryl Slusher, who cast the only vote against renegotiating the deal, questioned why plaintiffs were unhappy with the terms when, according to the consultant hired by First Step to administer the fund, only four of the 12 plaintiffs have applications on file.

The teens' families eventually erupted in angry exchanges with council members, yelling "This won't go away, mayor," and accusing Watson of coercing the teens into an unfair settlement in 1998. Dorothy Turner, the would-be eponymous patron of the Eastside's Rosewood Avenue, bopped the Rev. George Clark of Mount Zion Baptist Church, a member of the First Step board, across the head with a rolled-up council agenda.

After the meeting, Brown explained that Eastsiders were frustrated that First Step required applicants to form nonprofit organizations to apply for business start-up funds, and added that the plaintiffs had been discouraged from applying for scholarships because the first applicants had waited so long to receive awards.