Everyone's Loco for the Latino Bush They Call 'P' 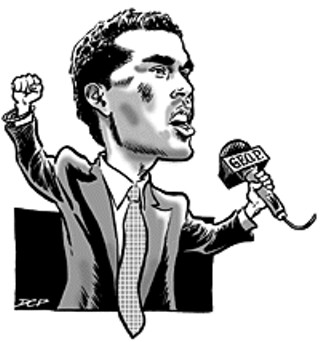 A Latino voter registration drive in Aurora, Ill., last month was nothing to write home about -- until George P. Bush mamboed into town and livened things up a bit. As with all the cities he's visited to promote Uncle George W. for president, the son of Florida Gov. Jeb Bush and his Mexican-born wife, Columba, offered the crowd his much-practiced stump speech, filled with fluffy, feel-good rhetoric. "If we don't register and don't vote, national leaders will not be aware of our point of view," the 24-year heir to the Bush dynasty told the crowd of cheering high school students. After the talk, young doe-eyed Hispanic females raced to take photos with the Bush nephew, the one People magazine added to its list of 100 most eligible bachelors. Reporters crowded around the sports-handsome Bush and tossed out some puff questions, while photographers focused their cameras on the guy some GOP boosters call the "Ricky Martin of politics."

Such are the scenes surrounding the "P" tour 2000. He has waved to fans during East Harlem's Puerto Rican Day, wowed crowds at California campaign rallies, and, in his biggest bilingual moment yet, addressed the GOP national convention last Thursday night.

Featured on the front page of The New York Times, George P., who plans to attend law school at the University of Texas, is the soft story of the day. USA Today dubbed him a Hispanic crossbreed of John F. Kennedy Jr. and Ricky Martin. People en Español magazine labeled him "hunky" and pronounced him a "buzz" among Latinos. The Philadelphia Inquirer went a step further and offered up a "hunk" photo spread of the young Bush with pop star status.

Because of the media attention, the Latino Bush sticks to his carefully scripted message and says little else. "There is something that's missing despite these prosperous times," he told a group of 60 people, most of them Hispanic, outside a community center in Toledo, Ohio. "We can't leave any children behind."

Now, he's appearing in TV commercials in California and other key Hispanic states."I am a young Latino in the U.S. and very proud of my bloodline," says the Spanish-speaking Rice University graduate in one TV commercial. "I have an uncle who is running for president because he believes in ... opportunity for every American, for every Latino. His name? The same as mine, George Bush."

'The Little Brown Ones'

One would think that George P. has spent a lifetime extolling his "I'm-Brown-and-Proud" message. That's news to some of his former classmates at Rice University in Houston. There were Hispanic campus groups and events that promoted Latino pride and heritage in his era. But the GOP's new "genie in a bottle" was nowhere among them. More importantly, some of his former Latino classmates remember a rich boy who, in contrast to his current assignment, steered clear of virtually all things Latino.

Ten years before his Rice graduation, George P. and the other grandchildren of the elder George Bush made their first mark on the national scene. Bush, in a presidential race against Democrat Michael Dukakis, was yearning to show off the grandkids to President Ronald Reagan, arriving for the GOP convention in New Orleans. Unaware of the media microphones picking up his comments, Bush pointed the family out to Reagan as he said, "That's Jebby's kids from Florida, the little brown ones."

The comment infuriated Democratic Hispanic activists, who charged that Bush was insensitive. An enraged Bush defended the comments as affectionate. In current media interviews, George P. shrugs off the incident. He likes to point out that he is the favorite of the elder Bush, regularly accompanying Grandpa on fishing or hunting trips. His mother made sure he was brought up bilingual and appreciated Spanish music long before the fashionable days of Cristina Aguilera.

Growing up in Florida, George P. enjoyed the privileged life that comes with the Bush name. He attended an elite prep school in Coral Gables and shared the classroom with current heartthrob Enrique Iglesias.

Like grandpa and uncle at Yale, George P. was a walk-on to the Rice baseball team his freshman year. But unlike grandpa and uncle, he got little playing time and abandoned the game by his sophomore year. Some former Rice students remember George P. as a quiet boy who rode his bike around campus and kept to himself. Former classmates remember he was preoccupied with being a Bush, but seldom talked about it. A photo in a 1995 yearbook shows him standing alone. Its caption: "loner."

"I had him for a class, and he was pretty quiet and didn't offer much to the discussion," recalls one former peer. "I didn't even know he was a George Bush until they called his name out in class one day."

Marty Makulski, a former classmate who lived in the same dorm as George P., says the nephew took time to open up. "We took a Chicano poetry class together and discussed and debated political issues," Makulski says. "He's a very articulate person."

Like uncle Dubya and nearly every other college student, George P. apparently possessed an affinity for drinking and parties, at least until he "mellowed out" in his final years at Rice. Former classmates recall that he was a frequent visitor to the on-campus tavern, more preoccupied with billiards than books. "I rarely saw him anywhere but at the pub, parties, or playing pool," says one student from that time.

"He is not the pristine son that everyone is making him out to be," says Rick Lopez, another former classmate.

While news stories have painted George P. as a volunteer "inner city" youth coach and mentor, former students who were interviewed say he showed little interest in causes or student groups, including Hispanic ones. "He was never at any of our events nor did he hang out with any of us much," says a student who belonged to the Hispanic Association for Cultural Enrichment at Rice (HACER), the main Latino student group on campus.

Likewise, Rice graduate and former HACER president Mike Gomez says he doesn't recall the proud Chicano at any of the campus' Latino student group meetings. "During my time at Rice, he was not a member of HACER nor was he active in pushing minority issues at the university," Gomez remembers. "We all ran in the same circles, and, frankly, there was such a dearth of committed people that anyone you could find who cared mattered a great deal. If George P. had been active in any form, we would have welcomed it, encouraged it even. But he wasn't."

Catherine Clack, director of the Office for Multicultural Affairs at Rice, says George P. was the Invisible Man during multicultural events. He "was never involved in any of the multicultural groups or events I oversaw," she says.

In Defense of 'P'

Responding to reports that he was AWOL on Latino issues and events at Rice, George P. told a Seattle Times reporter that the HACER president had "a case of amnesia." He told the reporter he was a member of HACER but spent his time studying, playing baseball, and dating.

Some former students also came to George P.'s aid in a Salon.com story, one of few in-depth pieces on the nephew. Former classmate and friend Mike Donovan told Salon.com that George P. "had a lot of close friends who were Hispanic and it seemed to me that he always embraced that side of himself." Packy Saunders also told the campus newspaper that stories on George P.'s lack of involvement in Hispanic student causes while at Rice initiates a "social stereotype."

"Just because a Latino student opts to study as George did instead of going to HACER doesn't turn him into a bolillo at midnight," he told the campus rag.

But Gomez, the former HACER president, believes that George P.'s past Latino activities (or lack thereof) raise legitimate questions about whether he is merely drawing on his Latino roots to help his uncle win the Hispanic vote in key states.

Tatcho Mindiola, director of the Center for Mexican-American Studies at the University of Houston, says the GOP's use of George P. is a savvy move, even though "it's pure politics." "Now I've seen [George P.] on TV, and he's sharp, articulate, and has a lot of appeal across the board," says Mindiola. "Whether that sways Hispanic voters in states like New York or California remains to be seen, but I think George W. Bush is smart for using someone in his family like this."

Mindiola predicts a future in politics for George P. "He certainly has what it takes to reach out to a number of voters if he chooses to go into politics and continue the Bush tradition."

As for his recent emphasis on his Latino identity, and his apparent earlier aversion to it, Mindiola says that shouldn't hurt either Bush. Some Hispanic students just need "time to crystallize. Of course," he continues, "some of us would like to see them coming out of the womb with the fist in the air. But that just doesn't happen. I can see why some [former] Rice students would be upset," Mindiola adds. "Like his uncle, it seems as if he's inheriting his position in life, not earning it."

After earning a history degree from Rice in 1998, George P. took a teaching job in an agricultural community south of Miami. He abandoned that for the campaign and for his future law school plans. Harvard, New York University, Columbia, and Yale law schools rejected his applications, but a spokesman for the Bush campaign says George P. has been accepted by the University of Texas law school, not far from his uncle's Governor's Mansion. He'll start in the fall or spring semester, the spokesman says, after his work on the presidential campaign trail.