What They Didn't Say in Philadelphia 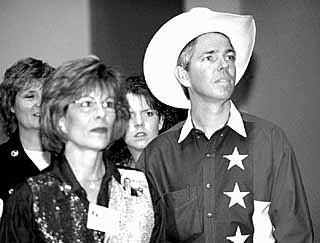 Weddington (l) and Barton were among the Texas delegation at the GOP convention. (Photo By Jana Birchum)

It's Tuesday morning, the Texas delegation to the Republican convention is gathered for breakfast at the Marriott two blocks east of City Hall in the City of Brotherly Love, and Frank Luntz's nose is so close to Phil Gramm's ass that if the two men were in Texas they would be violating the state's sodomy law. Luntz, the GOP consultant who gave us Newt Gingrich and his Contract with America, is addressing the delegation. But the object of his affection is the senior U.S. senator from Texas, seated at a table in the first row. Luntz tells Gramm and the 250 delegates, alternates, and guests how much he admires Gramm. He jokes that, except for his conservative dress, Gramm is the perfect Republican. And finally, he looks directly at the senator and obsequiously tells him how very very much he admires him. "If there is a way for Republicans to think, it is the way this senator thinks. If there is a way for Republicans to talk, it is the way this senator talks. If there is an ideal Republican, Phil Gramm is that Republican. Sir, I cannot tell you how much I admire you." The crowd -- and the senator -- love it. Luntz is paid to keep his finger in the wind. After Newt Gingrich's meanness alienated the American public and helped re-elect Bill Clinton, Luntz's polls and focus groups strongly suggested that the public had grown weary of negative electoral politics and the harshness that characterized the former speaker. (Gingrich was kept so far from the convention stage in Philly that he spent much of his four days there trolling for interviews in the media pavilions outside the convention hall.)

Luntz found, for example, that the word "orphanage" was enough to alienate one voter of every 10 who heard it proposed as a public policy. (Gingrich discovered the idea of putting the children of welfare mothers into orphanages in the puerile tracts of compassionate conservative guru and Austin American-Statesman columnist Marvin Olasky.) So Luntz suggested a gentler spin -- perhaps substituting "foster homes" in the place of orphanages. The party's conservative agenda, Luntz tells the Texas delegation, was best advanced by the gentle chiding and simple anecdotes of Ronald Reagan.

It was that gentler spin, which Luntz calls the Politics of Pleasantry, that defined the four-day gathering in Philadelphia last week. It might seem odd that the same man who gave us Newt Gingrich is now responsible for the Republican Party's summer of love in Philadelphia, but polls drive politics, and Frank Luntz is a pollster.

But has the Republican Party really abandoned the polarizing issues that turned off the American public? Consider abortion. Luntz complains that public discussion of the issue is a "lose-lose proposal." And so strong was his influence on the convention that it was not until the final night that any candidate speaking during prime time even got close to the topic. But that does not mean that the fundamental issue of the party's fundamentalist Christian right has disappeared. It's just no longer politic to stand on a podium and talk about it.

"Don't ask Gov. Bush about abortion," said Rev. Jerry Falwell in an interview conducted in the aisle behind the New York delegation. Falwell, described by the National Journal as "looking well-fed" ("porcine" is a more suitable adjective for the father of the Moral Majority), was holding forth while three or four reporters took notes. "Don't ask him questions about 'are you going to appoint pro-life justices?' Because if he answers the question 'yes,' then he blows away millions of votes. If he answers the question 'no,' then he blows away another million votes. Don't ask him the question. Don't make him answer it. Pray for him. Vote for him."

Falwell didn't get a lot of airplay, but anyone watching the convention on TV probably saw a lot of Texas Republican Party chair Susan Weddington. With her vice chair, David Barton -- a member of the Wall Builders, a group opposed to the separation of church and state -- Weddington was often at the front of the delegation the TV cameras couldn't resist. (Like most of the Texas delegation, Weddington and Barton were dressed for a casting call for Lone Star: the Musical.) Weddington was elected vice-chair and then chair of the party with the strong backing of the anti-abortion Christian right. And long before she was elected to lead the party, she was a vocal anti-abortion (and anti-gay rights) activist in San Antonio. Weddington is confident that the party and George W. Bush have not abandoned the fight against abortion rights.

"It may not be the focus of as many speeches as it has been," Weddington said, "but our fundamental support of the life issue is the same." She predicted that the party's goals on restricting abortion will not be achieved "all at once or overnight. But Republican governors have been signing legislation providing reasonable restrictions on abortion -- parental notification and waiting periods. And the earth hasn't come to an end. It's time to talk about other issues," Weddington said, "economic security for women, a responsible approach to protecting the environment, education."

Weddington is confident that Bush will appoint anti-abortion rights judges and justices to the federal bench. "He stated that he will look for justices that strictly interpret the constitution. Anyone that is for policies that uphold the sanctity of life will feel comfortable with that position." Bush has further reassured the Christian right by repeatedly saying that he most admires Supreme Court Justices Antonin Scalia and Clarence Thomas, who define the court's far right on abortion.

Dagoberto Barrera, a Brownsville delegate dressed a standard-issue, red-white-and-blue "Life of the Party" pro-life vest, makes a pragmatic argument similar to Weddington's. "We've got to get the man in office," he said. "Once we get the man in, we can work slowly, slowly, to take away from the abortion type of thing. But we don't want to be so radically right. You have a lot of people that are independent. They want to do whatever they want to do with their bodies. But in the end, it's killing kids."

U.S. Senator Kay Bailey Hutchison is one of very few pro-abortion-rights voices in a Texas delegation dominated by the Christian right. (Four years ago at the state convention, they even tried to bar her from serving as a delegate to the national convention in San Diego, because of her position on abortion.) Hutchison disregards the pro-life planks in the state and national platforms: "Platforms are not anything that you ever agree with 100%." In response to a question, Hutchison said that her position has not changed: "A woman has a right to choose abortion, with restrictions, until viability." But she seemed uncomfortable discussing the issue in front of the Texas delegation and quickly curtailed her remarks: "That's all that I have to say."

Early on the first day of the four-day convention, when it was almost impossible to attract even a C-SPAN camera crew, Nebraska Attorney General Don Stenberg got a big response from the small crowd when he said he took his state's partial-birth abortion ban all the way to the U.S. Supreme Court. "We lost by a 5-4 vote," Stenberg said. "But George Bush will appoint Supreme Court Justices that will turn that vote around." And in the final hour of the final day of the convention, the First Union Center's packed house exploded in cheers when Gov. Bush promised to put an end to partial-birth abortions. "Together, we will work to end partial-birth abortions," Bush said.

Don't expect to hear much about the issue between now and November. Abortion -- and the party's strong position against even the most basic rights for gays and lesbians -- are two issues that don't fit in Frank Luntz's Politics of Pleasantry. They have been polled out of public dialogue -- at least until after the election.