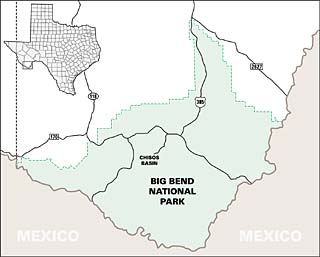 The National Park Service wants to weed out private developments from its parks, including Big Bend.

Currently, the Texas Parks and Wildlife Dept. (TPWD) is debating whether to allow the San Antonio-based firm Presidian to build nature lodges on two state parks, Palo Duro Canyon and Guadalupe River, and to expand and take over management of an existing facility at Indian Lodge. On Lake Ray Hubbard near Dallas, meanwhile, TPWD has already allowed a developer to build a lodge where boaters and other park visitors can spend the night.

But Simon, along with some prominent Texas environmentalists, questions whether such public-private partnerships are appropriate. They point out that state-owned land belongs to the public and is managed by an agency which should have creatures, not creature comforts, on its mind.

These critics also note that the direction of national park development, particularly by the National Park Service (which runs Big Bend National Park and Guadalupe Mountain National Park in West Texas) has lately veered away from development and toward protecting natural amenities. "The trend has been away from tearing up the inside of the parks," says Simon. "Once they gain a foothold, these lodges can be like a cancer that takes over the park." Adds Brian Sybert of the Lone Star chapter of the Sierra Club: "At the federal level, the National Park Service is working to get development out of the parks. We think Texas Parks and Wildlife in this regard is operating on a mentality that's 25 years behind the times."

At Zion, the Grand Canyon, and Yosemite National Parks, front-country campsites, bridges, roads, and parking lots are being eliminated. In Montana, a conservative Republican senator has just dropped the controversial idea of paving a dirt road leading to one of the most remote corners of Glacier National Park. As part of this new paradigm, park managers across the country are examining mass transit options that address air and water quality issues, and eliminate overcrowding and traffic snarls. Similarly, parks that see a lot of winter snowmobile use, such as Yellowstone, are examining bans that could prevent the continued degradation of natural resources.

In newer parks, such as Guadalupe Mountain, the National Park Service was able to avoid problems by simply avoiding all plans for development. A spokesman for Guadalupe says that there are no plans for infrastructure changes at the park, and that the administration's mission there is simply to "preserve and maintain the unique natural resource." And with more than 200,000 visitors finding their way to the remote Guadalupe Mountains every year, it appears that visitation hasn't been hurt much by this policy.

Still, Presidian partner Joseph Fitzsimons says that tourists interested in nature today prefer indoor lodging to sleeping on the ground, and that problems resulted historically because the parks didn't bring in private companies with solid credentials from the get-go. In the Chisos Basin of Big Bend, for instance, Fitzsimons points out that the park service itself made room for the hotels and blacktop that have turned one of the most beautiful spots in the state into a plot of land resembling a strip mall. "Have you seen them?" he asks. "They're damned ugly. If it were up to me, they would have never been built. If it were up to me, I'd take 'em out tomorrow."

Simon acknowledges that park managers made mistakes in the past, but argues that until recently, government contracts with concessionaires left administrators powerless to control their actions. Historically, he says, concessionaires appealed to their allies in Congress and created legislation that helped them "protect their investment," but in 1998 the NPCA helped enact dramatic changes to national legislation governing park contracts. "Concessionaires wielded undue influence for decades," Simon says. "With the help of their political allies, they enshrined a monopolistic, anti-competitive business system in the parks. If any of this new plan smacks of the old-style concessions arrangements, you cannot let it happen."