Creatures Great and Small Live Together on Noah's Land 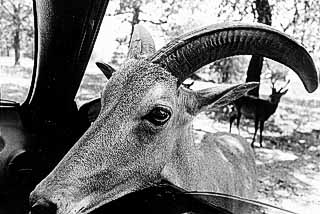 Doodad the Aoudad comes up to get some food pellets. Along the safari, the goats and emus are shameless moochers, unabashed in their quest for visitors' farm pellets, while the demure deer and impala would rather stand back and wait for the initial food grab to subside. Mother Nature works in mysterious ways. When the Watsons purchased an abandoned Pere David Deer (native to Tibet and extinct in the wild), and put it out in a pasture, it was adopted by a Scottish Highlander Cow named Bossie who not only took great care to hide the young fawn in the grass to keep it safe from danger, but nursed the baby as well. This has apparently happened with a number of orphaned babies at the wildlife park.

An added bonus for Day Trippers: About halfway between Highway 71 and I-10 is the Central Texas Museum of Automotive History on 304 in Rosanky, Texas. The museum boasts over 100 classic cars from turn-of-the-century steam buggies to modern luxury wheels. Hours vary throughout the year. 512/237-2635.

For insight on the issues surrounding exotic pets in the home, see "Meow Mix," p.32.