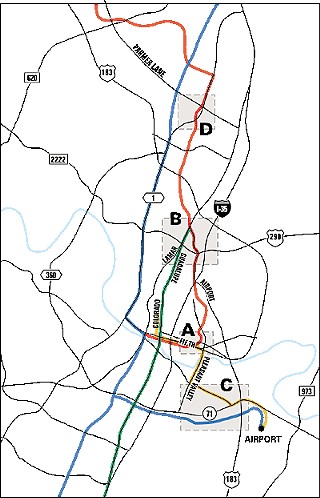 Just as surely as a freeway does, a rail system would open up vast amounts of land to development. The difference is that, in the case of urban transit, that development is actually re-development, as in infill, as in Smart Growth, as in the worst nightmare of many Austin neighborhoods. So the key to making light rail work, and not hurt, is to put both the tracks and the trackside projects in the right places. Here are four likely hot corners along the Austin rail line -- what they are now, what they could or should be tomorrow, and when that tomorrow would likely come.

(Disclaimers: We, not Capital Metro, came up with the station locations shown here; though they seem common sensical options to us, the current planning phase of light rail is addressing this question and won't be completed for a while. And the data behind these maps is from the city's last comprehensive city-wide land use study, which is several years old.)

Line: The Inner Orange Line, dubbed "Phase 1B" of the system

What's there now: The land-use map (see legend, bottom of page) illustrates one of today's hot-button political issues -- the wide swath of industrial and heavy-commercial development along the tracks owned by Capital Metro, much of it aging and losing its market appeal and wildly unpopular with the neighbors. Flanking that is the mostly single-family old barrio, which despite the Eastside's poor-and-crowded reputation is, at least according to not-completely reliable census figures, less densely packed than many in Austin, probably because of the number of vacant lots. The area also has destinations like Huston-Tillotson College and several major parks (Pan Am, Zaragoza, Rosewood) within walking distance of station sites, but what's not here is multi-family, aside from public projects.

What could or should be there: One could bet the farm that, if rail comes, some of these warehouses and depots will be turned into residential loft projects, and that vacant or dilapidated housing in the adjoining neighborhoods would be next. Already, homes near here are selling for unheard-of prices, so the market for such projects exists now. Such redevelopment will be easier to the west of here, within the East Cesar Chavez neighborhood plan, if the city approves its plan to put a mixed-use overlay on its industrial corridors. But most of the map here lies within the Holly planning area, whose team is dominated by El Concilio, the most vigorously anti-rail, anti-gentrification neighborhood group in Austin.

What's here now: An eclectic range of neighborhoods, from quite "healthy" (Rosedale, to the southwest) to not so much so (St. Johns, to the northeast) to rapidly becoming so (Crestview, to the northwest). In between them all, though, are some mighty big chunks of commercial development along high-speed, low-density Lamar and Airport Boulevards, much of which is quite unconnected to the surrounding neighborhoods, often by their choice. Unlike in East Austin, where the commercial/industrial corridor has been there forever, this map shows the fruit of a lot of encroachment, within recent memory, over which neighbors fought and lost -- and, at the south end, the Triangle, over which the neighbors fought and, for now, have won.

What could and should be here: Since this is the point where two lines would cross, the triangle between Lamar, Airport and Koenig, especially, is ripe for transit-oriented redevelopment, though the neighbors understandably may disagree. The Triangle itself is already planned, for now, for mixed-use density unmatched anywhere in this area, and its planner, Peter Calthorpe, will not work on projects unless they have transit service. But given the long horizon for rail buildout -- especially along Airport -- it's not farfetched, and indeed quite likely, that the whole Highland Mall mega-district, on both sides of IH-35 and U.S. 290, will be a massive reconstruction site served by the A-Train. (Another likely bet: Some of the old "airport hotels" at this corner, now with no airport to serve, will be converted to multi-family.)

What's there now: A whole lot of nothing, really, though some of the vacant land on this map has, since the opening of ABIA, become un-vacant, and more is being snapped up quickly. But this area is still largely undeveloped. There are, of course, major employers like AMD, Sematech, and Tokyo Electron, but their plants out here are, shall we say, not transit-ready. The real population density is to the north of here, in Montopolis proper, and then further west, in the apartment belt along Riverside, which if the current land-use pattern proceeds apace will dictate where the Orange Line runs, even though Burleson Road is where a rail line (not owned by Capital Metro) already links to the airport.

What could and should be there: Nowhere else in Austin is it more important that, if it takes transit-oriented development seriously, the city act now to make it possible. The lack of density out here is why the Orange Line -- the connector to the airport that a lot of Austinites thought made perfect sense as a starter line -- has been pushed so far back in the cycle. New deals are going on out here all the time, but mostly for affordable-housing subdivisions, including manufactured housing, that may already be ripe for redevelopment a decade from now, and for supposedly mixed-use industrial complexes like Interport and Met Center (on opposite sides of the Ben White/Riverside junction) that need to be planned, right now, to accommodate future transit. And the large tracts of land surrounding the big employers likewise need to be turned into something other than surface parking.

Possible stations: Parmer and MoPac (1), or MoPac between Parmer and Duval (2) (these could also be opposite ends of one big station)

What's here now: Again, the hot pace of development in the Northwest Corridor has already changed this map, but the overall mix of uses is about the same -- commercial, industrial, and multi-family development, usually quite large in scale, along MoPac and the arterials, standard above-median single-family tracts in between. (With the notable exception of Waters Park, a working-class neighborhood that was here long before the rest of this stuff.) Despite the constant knock against single-use zoning in the 'burbs, most places on the rail line don't have quite this complete a mix of uses -- a fair amount of everything -- in quite this small of space. Nor does the route run as close to a freeway, or to latter-day single-family subdivisions, as it does here.

What could and should be here: Though there are certainly opportunities for development at the north end of the line -- particularly farther north from here, at Howard Lane and McNeil Road -- there are two obstacles to transforming the area around Parmer, which is well on its way to becoming a freeway itself. One is that the developments here are so new and so large -- after all, this part of MoPac didn't exist ten years ago. The other is that the subdivisions like Milwood come so close to the rail line -- that attractive white space just west of Parmer and MoPac would bump up against single-family homes, which limits just how dense and intense a new project can be. Most likely here would be a project or several that were ultimately extensions of the station itself, which would logically be a park-and-ride.

Austin at Large: A Pre-November Pep Talk
Reasons for optimism as we ride this circus train into Election Station

City, Cap Metro to Seal the Deal on Project Connect
Now the voters need to agree