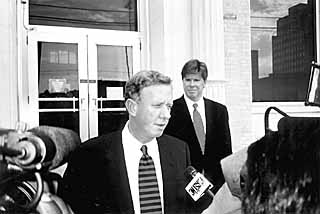 U.S. Attorney Michael Bradford (left) talks to reporters outside the courthouse in Waco while Michael Caddell, lead attorney for the Branch Davidians, looks on. (Photo By Robert Bryce)

The themes for the government attorneys are suicide, arson, sex, and guns. Lawyers for the Branch Davidians are talking about women, children, missing evidence, and fire trucks.

The verdict in the Davidians' $675 million lawsuit, which will likely come next week, will hinge on which version of events the five jurors find most believable. Was David Koresh a suicidal maniac who convinced his followers to torch themselves? Or were federal police too lax in safeguarding the inhabitants of Mount Carmel during the 51-day siege that ended with a deadly fire which killed 74 Davidians -- including 18 children under the age of 10?

Whichever side the jurors believe, the trial in U.S. District Judge Walter Smith Jr.'s courtroom will do little to quell the controversies that swirl around Waco. Too many issues have been set aside by Smith in the $675 million wrongful death lawsuit to bring any closure to the Davidians or to the government. And as the three-week-long trial winds down and attorneys prepare their closing arguments, true believers on both sides are lamenting lost opportunities to present their evidence in court.

Gordon Novel, the chief investigator for Ramsey Clark, the former attorney general who is representing some of the Davidians, has

complained vociferously throughout the trial that Clark has not been allowed to present evidence which he believes shows that federal authorities fired on the Davidians during the fatal April 19, 1993, fire. Novel says that Smith's ruling limiting each side in the lawsuit to no more than 40 hours of presentation is "a sham." Novel, a controversial New Orleans-based investigator whose past exploits include efforts to prove the existence of unidentified flying objects and that the FBI was behind the assassination of President John F. Kennedy, said his team has spent tens of thousands of hours investigating what happened at Waco. And yet, he said, "we aren't being given the chance to present our case. To say I'm sad is to understate the case. Judge Smith has killed so much of our evidence that this trial will be meaningless."

Some on the government side are frustrated, as well. Byron Sage was the government's lead negotiator during the standoff. He has since retired, but has become the agency's main defender on Waco. Last Sunday afternoon, holed up in a Waco hotel room, Sage's frustration was boiling over. "I so desperately want to get as much information out in an unbiased form as possible," said Sage, who hoped to take the witness stand during the trial. "The more you know, the better we look." In particular, Sage wanted to introduce some of the wiretap tapes and transcripts from the standoff. The documents, he says, are "very significant in terms of mindset and motivation of the Davidians. There is so much that's in here that won't be addressed at trial, it's infuriating."

The audio tapes are just one aspect of the standoff that won't be discussed. There also won't be any analysis or arguments about the forward-looking infrared (FLIR) videotape shot during the FBI's final assault on the compound. The plaintiffs had been counting on the FLIR tapes to prove their contention that agents fired on the Davidians, but Smith has ruled that it won't be discussed during the trial. None of the members of Delta Force, the secret anti-terrorism unit of the U.S. Army, who were at Mount Carmel during the final assault, will testify. There will be no discussion of the shooting of Michael Schroeder, a Davidian who was killed outside the compound by ATF agents on Feb. 28, 1993. His corpse lay where it fell for four days before it was examined by Texas Rangers, and ballistics tests on the guns used by the ATF agents who shot him have never been released. There will be no discussion of the FBI's use of tear gas. The Davidians have claimed that the amount of CS tear gas was excessive, may have been toxic to the children in the compound, and may have contributed to the deadly fire.

There also won't be any discussion of the 51 days of talks between the Davidians and the FBI. The FBI believes the negotiations showed their good-faith efforts; a lawyer for the Davidians calls it "51 days of terror," and wanted to discuss the FBI's use of psychological warfare against the civilians. There won't be arguments about why federal police were allowed to bulldoze the ruins after the fire, or why they destroyed the area known as the vault, the concrete structure inside Mount Carmel where most of the women's and children's bodies were found.

Perhaps the single most disappointing thing about the trial has been the lack of drama. That's because none of the commanders at Waco have appeared in the courtroom, and it appears none of them will. Despite promises from U.S. Attorney Michael Bradford that both Dick Rogers and Jeff Jamar, the two FBI commanders at Waco, would appear in court, neither has been seen. Nor were ATF commanders Phillip Chojnacki and Chuck Sarabyn called to the witness stand. The two decided to go ahead with the Feb. 28, 1993, raid on Mount Carmel even though they knew the element of surprise had been lost. Their fateful decision led to the carnage that followed. And according to the Treasury Department's own report, the two men "lied to their superiors and investigators" about their actions.

The lack of drama and controversial evidence has resulted in a trial that is frequently soporific. On several occasions, one member of the jury has been seen nodding off to sleep.

Government lawyers, led by Bradford, have shown jurors dozens of charred guns, presented hundreds of exhibits, and brought numerous witnesses to illustrate David Koresh's fascination with death, his unorthodox sexual practices (he had 15 "wives"), his exhortations to his followers that if he was killed, they should kill themselves, and his fascination with high-powered firearms. They have also presented evidence alleging that the Davidians spread Coleman fuel throughout the building before the fire. As Bradford told reporters last week, the defense case rests on the idea that the Davidians would "do anything David Koresh told them to."

Meanwhile, Michael Caddell, the smooth-talking lead lawyer for the Davidians, has gone out of his way to remind people that he is not defending David Koresh, whom he referred to last week as "an evil person." But whatever Koresh did, says Caddell, it didn't justify the government's decision to begin tearing down Mount Carmel five hours after the gassing began. Nor does it justify the lack of firefighting equipment on the scene. Focusing on Koresh's fascination with sex and guns, says Caddell, has been a "blatant attempt to prejudice the jury against the Davidians." He says that the government is in essence saying that "there were some bad people at Mount Carmel, and so the rest of them deserved to die. Until you get women and children pulling the trigger, they are pretty innocent."

While the two sides bicker about Koresh's predilections, the key term in the lawsuit will likely be the "discretionary function exemption." Smith and the jurors must decide whether or not the decisions made by the FBI at Mount Carmel are exempt from liability for the deaths caused by those decisions. The exemption is intended to protect government employees from civil lawsuits over actions they pursue with diligence and in good faith.

Compared to issues like sex, suicide, and guns, the idea of discretionary function isn't a very exciting topic. But it is exactly like the rest of the issues that are part of the Waco maelstrom: It's controversial and it won't be resolved any time soon.