Just the Facts: Ken Martin Sells In Fact Daily To Focus On The Good Life 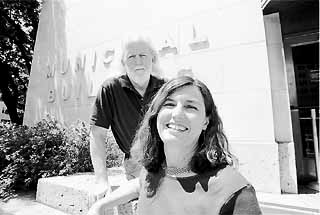 No one could ever accuse Ken Martin of sleeping on the job. But if he accidentally did so, it would be understandable. For the past five years, Martin has been quietly building In Fact Daily, his Web-based newsletter of City Hall affairs, into the premier source of information for those who want to be inside Austin's political scene. Anyone with an intense interest in what the city (and county) politicos and bureaucrats are doing -- including beat reporters for other media, Chamber of Commerce types, lawyers, and those politicos and bureaucrats themselves -- has a subscription to his publication (and if they don't, they ought to).

His workdays, especially since In Fact went from weekly to daily a year ago, have consisted of attending city meetings and hearings all day, writing stories well into the night, and loading the new content onto the Web before sunrise. And all this in addition to publishing his monthly magazine, The Good Life.

That's a schedule only the most devoted of workaholics could endure, so it should be no surprise that Martin has decided to leave the grind by selling In Fact to staff reporter Jo Clifton.

"I have the magazine, and it has been growing, and so much of the time I can't serve both well enough to do justice to both," Martin says of his decision to focus on The Good Life over In Fact. "Five days a week is fun, but the magazine has grown to the point that I have to pay attention to it." Martin has been operating both publications as Panache Publishing, in partnership with his wife, Rebecca Melançon, who handles the business end of things. He says he's "real happy" with the decision: "I started at Third Coast [a now-defunct Austin magazine] in the Eighties, so my first love is magazines. I love hard news as well, but I can't do both." And he adds that he'll still do a couple of stories a month for In Fact.

Martin also cites a couple of other reasons for the change: "First, there is the scale of investment. In Fact has been profitable since about a year to a year and a half into it. We did an intensive direct mail campaign to build a subscriber base, and that took a long time. ... It makes money, but I don't get fat."

Also, he says, "It's a product that, although widely read, is also highly pilferable. There is a high theft rate. Copyright laws are violated routinely. I know of a law firm that has a hundred attorneys, and gives the pass codes [to gain access to the Web site] to lots of them. There are city departments I know of that distribute it all over the place. What's missing in the newsletter industry is a way to guard copyright."

Clifton has been reporting for In Fact for less than two years, but has experience in both journalism and politics. "It's been a long and tortured path," she says. "I have degrees in anthropology, journalism, and law. I was a journalist in the Seventies at the El Paso Times, the Austin American-Statesman, and The Texas Observer. I went to law school [at UT] in 1977 and then worked in law. I worked as an assistant city attorney and an assistant attorney general, and as a municipal court judge. Then I just rested for a while and traveled. I had my own travel agency. Then, in November of '98, I asked Ken if he needed help, and he did." (Also worth noting is that Clifton is married to Roger Duncan, a vice-president of Austin Energy, former City Council member, and former director of the city's Department of Planning, Environmental and Conservation Services.)

"She's been a real steady part of the newsletter," Martin says. "She's written two or three times a week. Sometimes it is nothing but her stuff. ... We should be able to turn out at least as good a product as in the past."

Of course, any change at the top (and in a little newsletter like In Fact, there is really nothing but the top) raises questions of what type of editorial changes will accompany it.

"I don't anticipate any changes," Clifton says. "Our readers seem to be happy with the coverage we provide them, but of course, we're always open to suggestions. I will be asking our readers to let us know what other things they would like us to write about."

Clifton does plan to increase the staff size a bit, adding Ariel Cohn and Charles Ponzio as reporters and Pam Fridrich as the new business manager. Cohn is a former Daily Texan reporter who graduated from UT in 1997 and was working at a New York Times-owned weekly, Florida's Marco Island Eagle, before coming back to Austin. Ponzio has written op-eds for the El Paso Times and still contributes to that paper. Whether they will be full-time workers is still undetermined.

Actually, the bigger changes from this sale will probably be at The Good Life. "The magazine will become much more political," Martin says of his journal about "Life, liberty and the pursuit of happiness after 40," as The Good Life's subtitle declares. "It's mainly been a lifestyle magazine so far, but it will get more political. Stuart Heady recently did a feature for us on declining voter participation. We will weigh in on the environment, light rail, anything of significance to the region. [So far], The Good Life hasn't really been a player in terms of the way decisions get made in this community."

Clifton's biggest challenge will be to simply continue the good (and thorough) work Martin has already done. The hardest part -- establishing the newsletter's credibility as a serious source of news -- has been taken care of.

"The Chronicle reads me, the Statesman subscribes, several TV stations do," Martin says. "If you really want to know what happened, you can read In Fact or you can sit there and watch Channel 6 [the city's cable access channel]. I had an attorney tell me 'I used to hang around city meetings until In Fact came along, and now I don't have to.'"

As for carrying on Martin's traditions, Clifton says, "I just feel really, really busy. I went to bed at 3:30 this morning."

Politico, the weekly online newsletter devoted to Latino politics produced by former Austin American-Statesman columnist and San Antonio Current editor James Garcia, now has a monthly magazine, which premiered in April. To subscribe, send an e-mail to politicomkt@aol.com or write to Politico, 1020 E. Mountain Vista Dr., Phoenix, AZ 85048. Anyone not familiar with Politico who has an interest in Latino politics is strongly advised to get a subscription.

George W. Bush declared with absolute certainty that none of the 135 people executed under his watch could have been wrongly convicted. The Chicago Tribune isn't so sure.

In an excellent two-part series written by reporters Steve Mills, Ken Armstrong, and Douglas Holt, published June 11-12 (and reprinted in the Austin American-Statesman on June 18), the Tribune found dozens of cases marred by unreliable evidence, incompetent defense attorneys, and dubious psychiatric testimony. The story is guaranteed to send a chill up your spine, even if you are a death penalty supporter, and it raises the question of just how many innocents are buried in the Huntsville cemetery. The Tribune is the same newspaper that exposed flaws in Illinois' death penalty system, prompting the state's Republican governor to declare a moratorium on executions.

Unlike a Columbia University report that questioned the fairness and accuracy of the death penalty around the nation, the Tribune report has particular relevance to the current presidential race because it focuses specifically on Texas. Which brings up a question: Why is this report coming out of Chicago, instead of a Texas news outlet? Perhaps if our state's media institutions spent more time critically studying Bush instead of gushing about what a nice guy he is, we could make a more informed vote this November -- and maybe we could have done so in 1994 and 1998, as well.

Go to www.chicagotribune.com to read the report, "State of Execution."

It's News to Us

Austin360.com, better known as the Austin American-Statesman's Web site, has an impressively long list of links to other Austin media, including several newspapers and magazines we've never even heard of. But what it has in comprehensiveness, it lacks in accuracy -- for example, this description of The Austin Chronicle: "Dedicated to the exhibition, distribution, production, and critical discussion of films, videos and multi-media works by the Latino community."

In other Statesman news, political reporter Scott Greenberger -- strongly criticized in this column on May 12 for his coverage of George W. Bush's presidential race -- has left the daily to take a job with The Boston Globe.