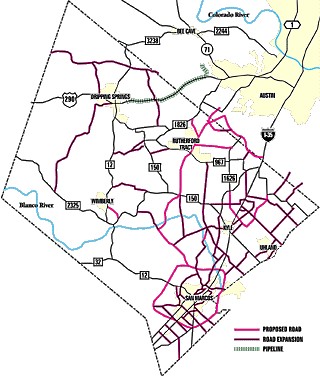 The Hays County Water Planning Partnership opposes a water pipeline (dotted line) to Dripping Springs as well as changes they say were illegally made to the county's transportation plan. The original plan is shown here.

As the land development battles continue to rage in Hays County, two new thorny issues may complicate matters further. The Hays County Water Planning Partnership, an organization that formed around the battle to stop the LCRA pipeline to Dripping Springs, has sued the county over violation of the Open Meetings Act after accusing officials of illegally changing a transportation plan.

The HCWPP says roads on the county's 2025 Multi-Corridor Transportation Plan were altered after the final public vote on the plan May 16. One of those alterations could benefit another development made public on May 26, the purchase of 2,700 acres in the Rutherford Ranch tract by Cypress Realty of Houston.

Roger Kew, an HCWPP member, says the group filed a lawsuit after hearing county workers explain that Commissioner Bill Burnett had helped them "draw the lines" on the road map after it was approved by the Commissioners Court but before it was submitted to the Capital Area Metropolitan Planning Organization (CAMPO). The plan is used as input for CAMPO's area transportation plan, which is then used as a guideline to seek federal and state transportation funds.

Members of a county blue ribbon committee charged with studying road proposals told the HCWPP that their recommendation was to include a proposed addition to Escarpment Boulevard so that it would head south from SH 45 and Circle C, cross the Hays County line, then veer southeast of the Edwards Aquifer Recharge Zone to connect with FM 967. Another option had the roadway continuing south to FM 967. But what was sent to CAMPO was a route that headed in a near-straight line from SH 45 to FM 967 directly across the Recharge Zone -- an alignment that was west of what the committee proposed.

Committee member Brian Dudley says the western alignment that ended up on the submitted plan was more in line with what was proposed by the owner of Rutherford Ranch at the time, Mike Rutherford. He also says that, although the committee had specifically recommended including a notation that these Recharge Zone roads be designated only for local access use, and not as a regional road, no such notation was included. And, although the minutes of the May 16 Commissioners Court meeting show that the court voted to not make a road through the Ruby Ranch subdivision an arterial, the road ended up with that designation on the submitted plan.

Commissioner Burnett, contacted on May 26, says legal advisors have asked officials not to comment on the matter because of the lawsuit. "What I can say is that this is the second time they've sued us in a year," he says. "A visiting district judge threw out the last lawsuit. I think the taxpayers are getting tired of this."

The HCWPP previously sued the county after Burnett, County Judge Jim Powers, and Commissioner Russ Molenaar attended a dinner last summer at the Salt Lick Barbecue sponsored by the Newhall Farm and Ranch Company of California. The company had planned to purchase a large portion of the Rutherford tract, west of Buda and east of 1826, for a 14,000-home development. Environmentalists protested the development, saying the Edwards Aquifer Recharge Zone didn't need a "city the size of San Marcos" over it. Newhall eventually pulled out of the deal. The HCWPP claimed that the quorum of commissioners at the dinner discussed county business illegally, but the lawsuit was dismissed.

Now, Cypress Realty has bought the Rutherford tract for $11 million, although it's uncertain what the company plans to develop. The land was one of the prime targets for developers, and the city of Austin recently bought about 1,700 acres of adjacent land to preserve as natural habitat as part of its deal with developer Gary Bradley over the Spillar Ranch project.

The HCWPP lawsuit and the Rutherford Ranch purchase follow the LCRA's decision on May 25 to proceed with its controversial water pipeline to Dripping Springs without first completing an Environmental Impact Statement. LCRA officials say the move was necessary to provide emergency drought relief to existing residences, and any new development served by the line in the future would be regulated by strict development standards from U.S. Fish and Wildlife. The HCWPP maintains that the pipeline could eventually extend down Nutty Brown Road toward Rutherford tract developments. "These are all signals to developers that they have a green light, that things are back on track for them," Kew says.