A Delicate Balance: Austin Progressives Struggle to Hold the Movement Together 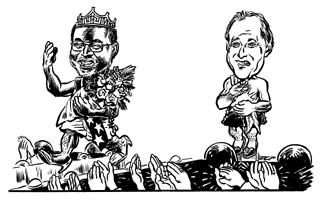 If you've been reading the papers lately, you may have noticed that SOS Action, the political arm of the SOS Alliance, and this paper have declined to endorse Mayor Kirk Watson in his bid for a second term. And you may have asked yourself: Why in the world not? Surely not because the parties involved regret that Watson made environmental protection one of the top concerns of the city's political establishment. Surely not because he's gotten almost everybody in town to agree that managing growth is the only way to preserve Austin's cherished quality of life. Surely not because he -- for the most part, anyway -- understands what we as a city want and why we want it.

As you might imagine, the reasons are somewhat complicated. They become more so when you realize that both SOS and the Chronicle's editorial board did see their way clear to endorse Willie Lewis, who -- pesky little fact, but true -- has voted with Watson on many issues that have peeved the environmental community. To take just a few examples: CSC, the Lower Colorado River Authority water deal, the Bradley settlement, and the Forum PUD were all supported by both Watson and Lewis.

There have been some key votes where the two differed, however. When the council voted on moving the day labor site from downtown to 51st Street, for example, Lewis sided with the losing minority on grounds of neighborhood preservation. Watson remained steadfast in his support of the fast-track move, which, not coincidentally, paved the way for construction to begin on the CSC project downtown. And then there was Gotham. Lewis joined Bill Spelman as part of the swing bloc in rejecting the Gotham condominiums, no doubt earning the undying loyalty of old South Austin -- where, by the way, the homes of city environmental leaders are disproportionately located -- in the process.

And it's hard to talk about defining votes without mentioning the landmark vote on Hyde Park Baptist Church, in which Watson sided with his good friend, developer's attorney Richard Suttle, to singlehandedly keep the church's parking garage proposal intact, when everyone else on the dais was ready to send the church back to the drawing board.

But were those votes really enough to make the difference? Probably not. The X factor here is one of perception -- perceived influence and perceived power. SOS Action members have said they didn't endorse Watson because he hadn't been adequately available to them, and the Chronicle non-endorsement served as a protest of Watson's love for expediency above all else.

All this could cause one to ponder anew -- if not for the first time -- where the endorsements leave SOS and its sympathizers. Will the movement's insistence on absolute loyalty ultimately undermine its cause? There was certainly some difference of opinion at both SOS and the Chronicle as to how the endorsements should be handled. Longtime SOS'er Brigid Shea quit the Action board over her group's decision not to endorse the mayor. And Chronicle Editor Louis Black followed the publication of the endorsements with a column describing his growing misgivings about the endorsement process -- and noting that he considered Kirk Watson Austin's best mayor in 20 years. No less an environmental purist than Shudde Fath wrote the Chronicle stating her support for Watson and her thankfulness for his leadership.

Will it be in Austin as it was in France, where the revolutionary Jacobins got a little too guillotine-happy, and wound up facilitating the rise of Napoleon? And before you go making any jokes about short guys in power, Watson is not Napoleon in this scenario. He's Danton. Napoleon would be the Chamber of Commerce guy who gets elected next if some lefty faction were successfully to conspire against Watson and those like him. And if you've got to add a Robespierre into the mix to make it all work out, then Bill Bunch is probably your guy. The unfortunate resignation of Robin Rather from her position as chair of the SOS board, and the return of Bunch from his recent book-writing sabbatical, shift the balance decidedly toward confrontation and away from compromise. (It does bear repeating at this point that environmental protection -- not compromise and friendship -- is the goal of SOS, and while compromise may be an end in itself for politicians, it never is for environmentalists.)

If the Austin American-Statesman has anything to say about it, it is the Jacobin-revolutionary perception of SOS that will prevail. The daily has published a series of articles lately suggesting that Austin has "outgrown some of its most outspoken activists," meaning SOS; that they have lost their influence with the City Council; that they are responsible for the city's problems down at the Legislature; etc. Things got so bad that SOS felt the need to respond with a two-thirds-page ad in last week's Statesman, insisting that they are, too, still relevant.

It's a sad state of affairs, no matter how you look at it. If Austin progressives have substantial, legitimate complaints about Watson, they are having trouble making them stick. If not, they're wasting valuable political capital just because Watson's rapid pace of action makes them edgy. (That and the fact that he drives a big, gas-guzzling SUV, something that alone is enough to arouse their suspicions.)

It's hard to tell which way is up in this town's political climate anymore, so local politicos shouldn't be blamed too much for getting a little confused. Take the neighborhoods movement, for example. Many of your Old Austin types have signed onto the cause of inner-city neighborhood planning in the face of pressures brought by Smart Growth. No doubt such a rallying point is needed, but has anyone else noticed how often the neighborhood preservationists have sounded like Circle C residents waving around their Covenants, Codes, and Restrictions? Next thing we know, they'll be demanding that the city repaint their fire hydrants a more pleasant hue.

Watching this spectacle, one only hopes that progressives will emerge from this moment of confusion with a renewed sense of purpose and a strategy for achieving that purpose. They're going to need it.

On a more personal note, this is my last "Council Watch," and I hope you'll indulge me in a little last-minute reflection. I moved to Austin in 1993, the year the city's growing size forced them to split the phone books into Yellow Pages and residential. And like everyone else who's been here for more than five minutes, I've seen changes in my time. What I'm about to say may shock you, so get ready: Things in Austin have gotten a little tense lately. The way things are going -- especially for someone in my line of work -- it's hard to go about your daily business without constantly being prompted to think about, and often fret about, the massive changes and where it's all headed.

So dig this: I'm moving to Houston in search of, among other things, a mellower way of life. In addition to a variety of personal factors, there are some half-serious reasons that I would like to mention, by way of partial explanation:

1) Excluding rush hour, traffic in Houston is not as bad as it is in Austin. Granted, this is due to the gigantic and ever-increasing number of big roads and highways there, but still, it's easy to get places. Not that I advocate profligate road building; I urge all Austinites to keep fighting the good fight for alternate forms of transportation. I myself plan to take the bus to my new job (just like Clare Barry and Will Wynn!) downtown.

2) Houston is a much cooler town than you think it is, but I won't try to explain that here.

3) Due to the lack of zoning laws and general architectural anarchy, it's easier to stay relaxed in the face of perceived crimes by developers and other capitalists. My newly acquired Houston bungalow is neighbor to other quaint old homes, for sure -- but also to decrepit old tear-downs, vulgar new townhomes, the occasional industrial warehouse, and four Randall Davis condo projects, for heaven's sake. But somehow, all that doesn't seem like such a big deal in Houston. They just let it slide.

Okay, I think that's enough of my tough-chick front. Though there's truth in everything written above, the fact remains that Austin has it over Houston in a million little (as well as not so little) ways, and even our exploding growth is not likely to change that anytime soon. If I started recounting them all now I would probably start to cry, and decide not to leave, and have to beg the Chronicle for my job back, and that would be embarrassing.

So in closing I will simply exhort you to keep making the extra effort it takes to keep Austin itself. It goes without saying that this city would not remain the fabulous place that it is without people who fight continually for its preservation. All these people, and their constant -- if sometimes flawed -- dedication to a common cause, are what I'll remember most from my two years of writing "Council Watch."