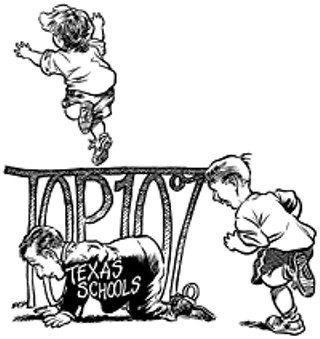 The director of under-graduate admissions at the University of Texas says a number of Texas high schools are exaggerating the top 10% of their graduating classes -- thereby granting more students automatic admission to UT and other Texas colleges and universities. "I suspect high schools are fudging," director Bruce Walker said in a recent interview, referring to House Bill 588, a 1997 law that automatically admits students in the top 10% of their high school graduating classes to UT, Texas A&M, Texas Tech, and other state schools regardless of scores on college entrance exams.

"I don't know if they are fudging on purpose or if they have not changed their policies yet," said Walker, who would neither name offending high schools nor specify how many schools may be doing this.

The bill was passed in response to Hopwood vs. Texas, the 5th Circuit Court of Appeals decision that barred public colleges from considering the race of applicants when making admissions decisions. It was designed to help the best-qualified minorities get into state colleges and universities without using race as a factor in admissions. Last year, 77,751 students submitted applications to Texas public universities; of those, 12,210 ranked in the top 10% of their class.

State Sen. Gonzalo Barrientos (D-Austin), who authored the bill with state Rep. Irma Rangel (D-Kingsville), said his office will investigate the allegations of cheating. "Top 10% means top 10%, period," he said. "The intent of House Bill 588 is for public and private schools to provide accurate information. If this [inaccurate reporting] is happening, we will put a stop to it. Offending schools would be doing a disservice to students in other parts of the state, who legitimately graduated in the top 10% of their class." Barrientos said he plans to work with the Texas Higher Education Coordinating Board to determine if there is a problem -- and, if so, how bad it is.

Walker said he wasn't shocked by the alleged incorrect reporting because schools are going through some growing pains implementing the new policy. But, he emphasized, it's a serious problem that needs to be curtailed. "I really don't want to accuse schools of fudging on purpose. This is only our second class under House Bill 588; some [schools] are still trying to adjust their policies."

One way schools are incorrectly reporting is by not counting ties in class rank, Walker said. "They'll have a No. 1 and then 12 No. 2s, and then the next person they would count as No. 3 when in reality that person is number 14," he said.

Schools have not cited ties in class rank as a concern in implementing HB 588, said David Gardner, assistant commissioner for planning and information resources for the Texas Higher Education Coordinating Board, which is overseeing the implementation of the bill. "Frankly, it's more likely that schools will have students on the cusp [of the top 10%] who do not make it," Gardner said. "We've had conferences with counselors from around the state, and their main concern is students being at the cusp, not a large number of ties."

Also, some schools have defined the "top 10%" as a specific grade point average, said Uri Treisman, director of the Charles A. Dana Center, an organized research unit in the College of Natural Sciences at UT dedicated to strengthening education and civic life in Texas. "Many schools are setting a 'bar' on what the top 10% is. They'll say historically that students with a 3.7 [GPA] are in the top 10% and tell students this is what they need to achieve to be in the top 10%," he said. "They do this to push kids a little harder, but this creates a problem in how many students are in the top 10%," because these schools end up giving top 10% designation to anyone over the "bar." Walker also confirmed this practice, but both men declined to name any specific schools that have overreported their top 10%, or to speculate on the extent of the practice.

However, Marty Grassel, director of undergraduate admissions at Texas Tech University in Lubbock, said the issue has been brought to her attention and her office is working to determine which schools are violating the law. "I've been alerted to the issue," Grassel said. "We're running the numbers to see if we can find anything. I haven't seen anything funny yet, but we're investigating this."

One school in the Austin area which is apparently overreporting is Westlake High, which determines its top 10% by a specific grade point average. The school takes the average of the top 10% for the last three years and then sets the standard when the students are freshmen. "We don't just pull it out of the air," said Shirley Faske, a counselor at Westlake. The school is on a nine-point scale and students earning a 7.16 would be in the top 10% for this year. "Sometimes we go over, sometimes we go under," Faske said. If they ever go under, she said, they would then go under the bar to get the 10% needed. Faske, contacted at press time, said this admissions standard has been approved by the admission departments at both UT and Texas A&M. Administrators from both schools were unavailable at press time to respond to Faske's assertion.

Designating more than 10% as "top 10%" is a criminal offense, said David Anderson, legal counsel for the Texas Education Agency. "It's falsifying government documents," he said. "This type of lying is a criminal offense. The school district would be charged with the same offenses as tampering with TAAS results."

Falsifying government documents is a third- degree felony punishable by two to 10 years in prison with a possible $10,000 fine, said Patty Robertson, assistant district attorney in the public integrity unit of the Travis County District Attorney's Office. But she added that first-time offenders are often given probation.

When asked about the legal ramifications of incorrectly reporting the information, Walker said, "I'm not a lawyer. [Neither] House Bill 588 nor the rules established by the coordinating board have within them any kind of punitive damages." UT and A&M are both planning to remedy the situation by educating schools on the law, he said. "We are trying to correct it through education rather than making it punitive. We're educating the counselors and educating the schools and the districts on what's expected. UT and A&M have not clamped down yet. It's a policy that we are going to phase in."

If schools do not correct the problems themselves, Walker said, UT and A&M may send letters to the schools that are incorrectly reporting to inform them that their top 10% students will not be automatically admitted. "Now, that would get their attention," he said, "because that means that none of their students would have automatic admission because they are not complying.

"That's a rather drastic measure that punishes students for the administrator's behavior," Walker added. "That's harsh. I talked to my colleagues at A&M. We have more qualified applicants than we do spaces. We're allocating a scarce resource. At the time, A&M was not willing yet to make this kind of step."

In 1997, Walker spoke to the UT Faculty Council about the implementation of HB 588 and the possibility that schools were designating more than 10% of their classes as top-10%. He told the council that the Texas Higher Education Coordinating Board had passed regulations requiring that no more than 10% of a graduating class could be counted in the top 10%. The Coordinating Board passed regulations to prevent this from happening, but it does not monitor schools to ensure honesty, Walker said. Board rules mandate that schools must provide the student's rank and class size in their transcripts.

"If you have a class of 100 graduates, these rules prevent them from making one person the valedictorian and then 35 of their best friends as No. 2 and then naming No. 3, 4, 5, 6, 7, 8, 9 and 10, so it's true these rules prevent this," said Gardner, adding that the rules should allow universities and colleges to easily identify schools that are incorrectly reporting. "If a high school in Austin decides to cheat, it's going to be pretty obvious that they are fabricating because schools must provide the rank and the number of students. If you have more than one student as No. 2, then it's pretty easy to notice."

Although the rules make incorrect reporting detectable, the UT admissions office is unable to specify the number of students allowed in under HB 588 from each high school in Texas, because the office does not keep such records. Nor do they have the entire ranking list for each school, which makes it impossible to determine the number of incorrectly reporting schools and the extent of the practice, Walker said.

Gardner declined to speculate on why schools may still be reporting their numbers incorrectly. "I don't have confirmation of [incorrect reporting]," he said. "There's an adjustment period for schools. They may not understand the new rule. Calling it cheating is jumping to a conclusion."

Sources familiar with Texas college admissions identified eight schools prone to designating more than 10% of their graduating class as top 10%. All were affluent and located in the suburbs of Austin, Dallas, and Houston. Only three of those schools responded to requests made under the Texas Open Records Act, and none of the numbers these schools provided indicated that the schools were in violation.

Still, a full audit of the system is needed, said Dana Center director Treisman. "This suggests there need to be periodic audits of the system to ensure cheating is not going on," he said. "It would decrease the likelihood. People forget what a valuable asset slots at schools like UT and A&M are." And incorrect reporting works directly against the mission of the bill, he said. "Part of the message of House Bill 588 is: Effort and achievement are rewarded," he said. "It doesn't matter where someone is born. This subverts the system. It works against the public good." Also, high schools that are incorrectly reporting are stealing taxpayer money and denying access to other students, he said.

Despite the alleged fraud, though, Treisman still believes in the bill. "It's still a good policy. The incidents of fraud do not discredit a good policy, the instances of fraud are isolated," he said. "This system gives broader access to UT. The few arrogant schools who are abusing the system should not destroy the policy."