Rainey Neighbors Debate the Future of Their Neighborhood 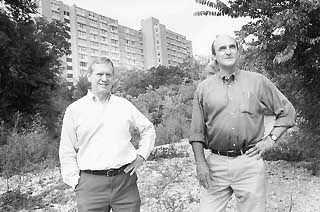 So, does anyone really want to save Rainey Street? Judging from the surprisingly contentious not-really-a-hearing at last week's City Council meeting on the Rainey neighbors' not-really-a-redevelopment-plan, it appears not. Instead, the city is wrangling with dueling visions for reinventing the last single-family neighborhood in the 78701 ZIP code. Do we turn Rainey into a new Smart Grown extension of downtown, or do we preserve its "character" by making it into another Kerbey Lane? Most of the people who actually live on Rainey Street -- or, more to the point, in the one-block Rainey Street Historic District -- want the former. In their "conceptual strategy" -- carefully not described as a "plan" -- those neighbors envision new commercial and mixed-use development for their environs between I-35, Cesar Chavez, Town Lake, and Waller Creek.

The not-a-plan document, presented at the not-a-hearing by council alumna and Rainey homeowner Brigid Shea, includes two conceptual schemes, which differ mostly in how many of the current homes in the district are retained. In both schemes, the bulk of Rainey is turned over to mid-rise residential-over-retail development, the classic Smart Growth template. The eastern edge, fronting the interstate, would house high-rise commercial development, which the not-a-plan views as a buffer to block out the noise and cut-through traffic that have made Rainey a less-than-livable residential district.

The real controversy over the Rainey neighbors' vision is how it would get done. The neighborhood, with assistance from developer/ landowners Perry Lorenz and Robert Knight (whose holdings include big chunks adjacent to Rainey) wants to take advantage of (to quote the not-a-plan) "the unique opportunity today, while most of the neighborhood is still underdeveloped, to put together the necessary mass of property to attract the interest of quality developers and the providers of private capital necessary to make it all work."

In other words, the neighbors want to sell out en masse, combine all of Rainey Street into a single tract, and pursue Central Business District (CBD) zoning, the most intense the city will allow, to make it viable for a big developer wanting to do a big project. This would also give the Rainey homeowners a better financial deal than they'd get from selling individually. But the CBD option scares people who'd like to see some of Rainey's historic, single-family look preserved.

We say "look" instead of "character" because nobody has yet offered an alternative for preserving Rainey as the working-class, multi-ethnic neighborhood that it's always been. Even the few holdout homeowners in the Historic District sound more ambivalent than actively opposed to their neighbors' ideas. More vocal are the residents of the adjacent lakefront condos -- the Villas and the Towers on Town Lake -- who complained mightily about being excluded from the Rainey not-planning process. (Shea notes that the vote on whether to endorse the strategy was limited, for sensible reasons, to the people who would actually be selling the property that would be redeveloped.)

But the biggest, most organized, and most powerful opposition to the Rainey neighbors came from the Heritage Society of Austin and its allies in the historic-preservation community. While it's no surprise that these folks would reject an idea to wipe from the map an established historic district, the Society's interests appear to be equally rooted in real-estate economics.

Several speakers, including executive director Julie Morgan, realtor Claudette Lowe, and Sixth Street property owner Carl Daywood, evoked not the need for working-class housing and history downtown, but the sexiness of cool old houses within walking distance of Town Lake. With some work, the council was told -- albeit work that would be out of the price range of the elderly Hispanic homeowners who dominate today's Rainey -- the street could be a great neighborhood.

This rather blatant appeal to gentrification -- inevitable if, as the Heritage Society desires, the city applies bona fide historic zoning to Rainey Street -- has little to do with why the neighborhood was listed in the National Register in the first place. (The impetus for the listing came not from preservationists but from East Austin activists aiming to keep the neighborhood viable, affordable, and safe from encroachment. It didn't work.) It's questionable whether a future Rainey Street filled with hair salons, shops selling potpourri, or men walking twin Jack Russell terriers, charming though it might be, would represent "preservation" of the actual history of the neighborhood.

But the opposition was strong enough to derail the Rainey neighbors' original fast-track attempt to get the council to commit to CBD zoning sooner rather than later. Instead, the neighbors' plan will wend its way through seven different boards and commissions, including the Historic Landmark Commission, which is sure to oppose it, with no deadline set on its return to council. "What's important is that the ball got rolling," says a disappointed Shea. "But I feel the council really needs to specify a time frame, or this will be an issue that drags out forever and never gets resolved."