Mary Arnold Gets Down to Brass Tacks on Bradley Deal 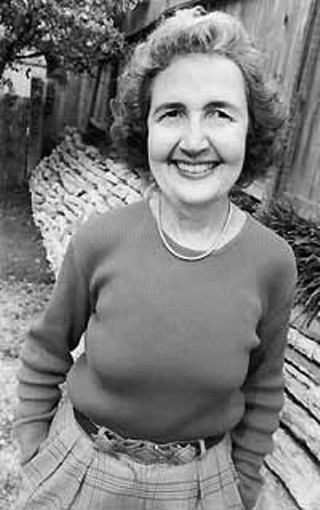 When developer Gary Bradley singled out Mary Arnold in this space two weeks ago, he was acknowledging something that members of the city's environmental community have long known: Mary Arnold knows things. Currently the vice chair of the Save Our Springs Alliance (SOSA) board of directors, Arnold has served on both the Parks Board and the Planning Commission, has run for City Council, and is a determined gadfly on issues such as preserving the Sand Beach Reserve tract from commercial development. As a longtime fighter for Austin's right to self-determination, she has the clout and the institutional memory to take on the big issues of the day. The latest upset she's involved in is the city's contemplation of reaching an agreement with Bradley that would bring 3,076 acres of his prime aquifer land under the city's protection, albeit at development levels somewhat higher than the SOS ordinance would allow.

In his answer to written questions posed by the Chronicle on the deal, Bradley had this to say about Mary Arnold: "In my opinion, there are only two people who know everything that has happened in this conflict over the last 15 years -- Mary Arnold and myself. We are the only ones who have always been there from start to finish. ... Hopefully, Mary and I will both live long enough to see all the promises of the settlement agreement fulfilled."

Perhaps unfortunately for those who take Bradley's statements about Arnold seriously, the SOSA Board has taken a position of opposition to the proposed settlement, and has issued a list of several strong objections to the deal. We decided it would only be fair to give Arnold a chance to do as Bradley did: reply in writing to a set of questions regarding the proposed Bradley settlement and the prognosis for environmental regulation in Austin, including questions regarding the SOSA's opposition of said settlement.

Austin Chronicle: Is the proposed settlement with Gary Bradley the best that can be done for water quality?

Mary Arnold: No. The proposed Bradley settlement is a short-term compromise that does not address the issue of long-term protection of Barton Springs and the Barton Springs salamander. It does not have "good qualities in the highest degree." What is needed is further expansion of a sprawl wall, in addition to the Prop. 2 lands acquired by the city of Austin, and a responsible and inclusive regional planning effort to address the long-term survival of the springs and the endangered salamander.

Just as the Lower Colorado River Authority has said that they do not have a plan to save Barton Springs, so Mr. Bradley does not have a plan adequate to secure the springs for future generations. One danger for water quality of the proposed Bradley settlement is whether the extension of city water and wastewater to the 1,079-acre Spillar Tract and water to the 657-acre Pfluger Tract will diminish development pressures in the northern Hays County area or whether it will be a spur to more new development in this environmentally sensitive area. Ever since the hotel and golf course were proposed some two years ago, the Save Our Springs Alliance has felt that such a development was very inappropriate for the recharge zone, and a threat to preserving good water quality at Barton Springs partly because of the additional development it could spur.

AC:Given the years of acrimony, how can the city and/or SOS trust Bradley?

MA: Some say that the best way to deal with Mr. Bradley is on a cash-and-carry basis. This concept implies that something specific is paid for and adelivered immediately. In the case of the proposed settlement, there are still uncertainties as to what the city will really be getting -- and when.

Many people distrust Mr. Bradley because of the city's past experience with agreements related to his Circle C MUDs. His original request to the city in 1983 was that the city provide water and wastewater outside city limits to his MUDs, and in exchange the city would get a land use plan, not otherwise legal outside city limits. We were also supposed to get water quality controls by Circle C -- adherence to the city's watershed ordinances "as amended from time to time." Because Mr. Bradley was successful in getting the Austin City Council and the State Legislature to prohibit enforcement of that provision, the citizens of Austin have not gotten the control of development that they were promised in exchange for extending utilities to the original Circle C MUDs.

In the proposed Conservation Easement related to the Bradley settlement, the city's main right seems to be enforcement of the impervious cover limits on the 3,087 acres to be developed. According to the settlement, the impervious cover can be moved from tract to tract, and an exact amount of impervious cover per tract as assigned initially can be changed. That flexibility for the Bradley interests could easily become a shell game, and when all the shells are raised, there may not be enough land conserved to meet the terms of the original agreement.

That is why the issue of enforcement by a third party is critical to a proposed settlement; it's a matter of trust.

AC: Is extending utilities as a means of controlling development always a bad thing? Aren't we better served by providing the water ourselves than by, say, having the LCRA do it? And what about the size of the water line? If it is sized to meet only Bradley's demand, does that allay some of your fears?

MA: Not necessarily. However, the city's experience is not good. Utilities have been extended to the southwest area to control development, and that development has not been controlled as set forth in the contracts and agreements. And the citizens of Austin paid the most for those lines -- without being able to vote on those bonds.

Sizing only to meet Bradley's demand assumes that there is no alternative to Bradley's demand other than service from another provider such as the LCRA. What about the alternative of securing the Spillar and Pfluger tracts as part of a sprawl wall? Under that alternative there would be no demand for surface water extension to those tracts.

AC: What is the prognosis for SOS compliance in currently grandfathered territory?

MA: Poor -- if you look at all the grandfathered projects being constructed along MoPac south of Town Lake. The April 30, 1997, Federal Register carried the official listing of the Barton Springs salamander as being an endangered species. Part of the listing stated: "Because most of the threats to the salamander come from diffuse sources that are cumulative in nature, their effects will be observable at the ecosystem and population level rather than at the individual level. The health of the aquifer and Barton Springs, and the long-term survival of the Barton Springs salamander, can only be ensured through a concerted, organized effort on the part of all affected Federal, State, and local governments and the private citizenry to protect the Barton Springs watershed."

Unfortunately, we have not seen that concerted, organized effort. The city of Austin and many of its citizens have been proactive in protecting the watershed by trying to enforce adequate regulations, and by purchasing almost 15,000 acres in the watershed and conserving it from development. Those efforts have been counter-balanced by the Legislature's insistence that old plans can be built without current water quality controls, by the TNRCC's refusal to enforce meaningful impervious cover limits on development in the Barton Springs Zone, and by the reluctance of the U.S. Fish and Wildlife and other federal agencies to insist on adequate control.

AC: The city has been successful in overturning Austin-specific legislation that has been passed by the Legislature. Do you think that it could continue with a successful challenge of 1704? If so, why do you suppose the city has been reluctant to bring such a challenge?

MA: Predicting the outcome of a legal challenge to 1704 is beyond my crystal ball. The city, SOSA, and even the Chamber of Commerce and the Real Estate Council of Austin opposed the passage of the new 1704, and lobbied heavily at the Legislature against it. All to no avail. A big disappointment -- and discouraging to the city in terms of a future legal challenge.

It is going to take more than legal challenges to change the culture at the Texas Legislature from the Austin-bashing that began in 1987. SOSA has strongly supported regional dialogues with all interested parties related to Hill Country issues such as land use planning and regulation, preservation and allocation of natural resources such as water, and specifically preserving and protecting Barton Springs and the salamander. Alliances with other citizen groups that are facing similar challenges in other areas can help to strengthen our chances at the Legislature.

While the city of Austin has been successful on the legal challenges of some of the bad legislation, it has not taken those victories far enough to undo all the damage caused by the bad legislation. New challenges to bad legislation should be considered within the context of an overall strategy for long-range protection of the springs, the salamander, and many other natural amenities of the Austin area that are threatened because of the impacts of massive growth and urban sprawl.

AC: Where are we going to find a third party who's both willing and also acceptable to both sides? And wouldn't such an inclusion just complicate matters beyond practicality?

MA: As it now stands, the conservation easement that is part of the Bradley deal is legally unenforceable and not workable. The property upon which there is to be no impervious cover is not described with enough detail, and the agreement calls for that area to be selected at a later time. Such agreements are legally unenforceable because of lack of specificity with respect to the land description, and because the terms are subject to continuing modification in the future. The easement is simply an agreement to agree some time in the future. Moreover, the procedure to describe the land which is not to be covered with impervious cover is so complicated and fraught with uncertainty that it is, for all practical purposes, unworkable. Consequently, given the history of the parties, the deal under consideration would simply prolong the litigation indefinitely. You are correct, no third party would be willing to take on such a charge.

However, if both parties are really serious about an enforceable easement, we propose the following: