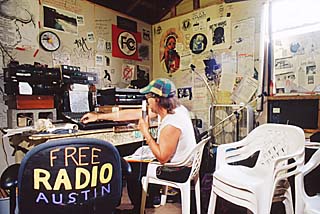 Oh glorious day! True democracy is at hand! Or maybe not. On Jan. 20, the Federal Communications Commission (FCC) approved new rules which legalize a new class of noncommercial, low-power FM radio stations. On the surface, this would appear to be a wonderful thing -- in theory, when the new rules take effect, the corporate stranglehold over our nation's airwaves will finally be loosened a little, as microbroadcasters (often called "pirate radio") can finally "go legit" with their low-wattage stations, offering up eclectic and diverse noncommercial programming without the fear of federal jackboots knocking on their door. Currently, such broadcasters risk hefty fines, confiscation of their equipment, and even jail time for unlicensed use of the airwaves. With that fear factor removed, it's easy to envision the kind of democratic utopia that microbroadcasting advocates have hoped for since the invention of radio. Surely, with this ruling, low-power stations -- whose signals supposedly would cover a radius of about five miles or so -- will start sprouting up like mushrooms after a rain, tailoring their service to the needs of their neighborhoods and communities.

Not so fast, say local microbroadcasting experts. Indeed, far from being a source of relief and excitement, the new rules have only served to anger current and potential microbroadcasters, who accuse the FCC of making the rules so restrictive that the airwaves will still remain under corporate lock and key. Meanwhile, some micro advocates argue that the FCC doesn't have the authority to regulate low-power radio, anyway. And to top it all off, the powerful National Association of Broadcasters (NAB), representing commercial radio interests, is challenging the new rules and organizing congressional efforts to stop legal microradio in its tracks.

For those who might want to apply for a license, the major sticking point applies to what is called the "third adjacent" clause of the new rules.

But the new rules stipulate that micro stations would be restricted to the third-adjacent frequency -- so in this example, 98.7 would be the closest a micro could get to the already-existing 98.1.

"The requirements that they've set for [micro] stations are in principle met by two frequencies in Austin," says Jerry Chamkis, the former engineer at KOOP and a micro- and community radio enthusiast, referring to the open slots at 102.9 and 106.5. However, due to a variety of technical reasons, Chamkis says, "They're both rather poor frequencies for broadcasting.

"The criteria is that they're third-adjacent, that they've got no station within a considerable radius," Chamkis continues. "Well, that's not the sole criteria for how clear a frequency is or how easy it's going to be to use it. The whole issue here is [whether] the second-adjacent channel [will] be available or not available. The fact that it's not available is a clear win for the NAB and basically makes this whole thing a farce."

Of course, the idea behind the second- and third-adjacent rules is to avoid having stations stepping on each others' toes. But if those two frequencies were the only ones available, Chamkis asserts, microstations might not interfere with commercial stations -- but they would interfere with each other.

"Their [the FCC's] contention is that these 100-watt stations with a 100-foot antenna will have an effective radius of five miles. [Actually, the FCC says the two new classes of stations, at 10 watts and 100 watts, would have radiuses of one-to-two and 31é2 miles, respectively]. That's by FCC definition -- what they consider to be an effective radius is -- when your radio is just locked on dead-solid with no noise at all. ... Well, yeah, it'll do that for five miles, but it'll be receivable [with a less-perfect signal] until you hit the hills," Chamkis says.

The third-adjacent rule is wrong, says Chamkis, "because it's a politically motivated specification. It does not in any way relate to the technology or the engineering practices and standards that are supposed to govern these kinds of decisions."

As proof, Chamkis points out that Austin currently has an unlicensed microbroadcaster operating out of East Austin which is only two frequencies down from Top 40 pop station KHFI (96.7 FM), and is not interfering with that station.

That micro is Free Radio Austin (FRA), a collective of "Free Radio" activists who have been using the 97.1 channel for 10 months now. The "Free Radio" concept is similar to that of access television -- its proponents push for community stations open to all, regardless of ideology. 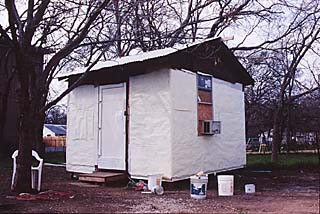 Free Radio Austin broadcasts from the property of a programmer who goes by the pseudonym "Reckless," a longtime micro advocate with experience in a similar movement in Santa Cruz, California.

While Chamkis' argument against the new low-power rules is primarily technical, both he and Reckless also provide a more philosophical one: "Whether they [the FCC] know it or not, it's going to co-opt the radical movement in this country, both right and left," Reckless says. "It may create diversity on the spectrum; it's not going to create diversity at individual stations, which is the beauty of Free Radio. -- It's also still going to be expensive [to apply for a frequency], so the class argument still exists."

"The kind of institutions [the FCC] is seeking to apply for these licenses have no requirements to be diverse," Chamkis says. "It'll probably be the Hyde Park Baptist Church and some school. And that's it. That'll be the alternative broadcasting in a city the size of Austin. And that's not what we had in mind at all."

"It's not that we don't want to go legit," Reckless says of FRA. "If they offered us a license that wasn't completely ridiculous, we surely would take it. And we have requested a waiver from the FCC. -- and there was just no response whatsoever. But, in solidarity with the rest of the microradio movement across the rest of the country -- we're not going to apply for a license as Free Radio Austin. -- It goes against our mission statement, [which] states that we're here to resist hierarchical organizations that run our communications industry and have been stealing our communications from us.

"A lot of people in the microradio movement are going to take the inch that they've given us, and a lot of people aren't. It's definitely a way to divide and conquer the movement."

One of the most celebrated micros in the nation is Micro-Kind Radio, a San Marcos station which has been written up in just about every microradio article published in the past couple of years. Micro-Kind has received a cease-and-desist order from the FCC, but the station has filed a lawsuit to keep the feds at bay. (And on Monday, Free Radio Austin received an official warning from the FCC.)

The heart of their lawsuit and their resistance to the new licensing rules goes even further than engineering or philosophy -- they argue that the FCC doesn't have the constitutional right to regulate low-power radio at all.

Hahn says the FCC is "just assuming authority, knowing that whatever stations they're going to go shut down [are] going to be ignorant of the law. -- And people being ignorant of the law will get their equipment confiscated or will get scared by the first letter they get from the FCC and shut down. -- Kind Radio will not apply for this bogus license."

Jim Ellinger, the founder of KOOP radio (a "legit" community station, not a micro) and one of Austin's most knowledgeable experts on community-based radio, says, "I don't know of any Texas pirates that are applying" for the licenses.

Ellinger -- whose controversial removal from KOOP has been documented in this column -- has said he is interested in a license, but doesn't think it will happen any time soon, if at all. He bases this opinion "on my experience on seeing the FCC screw things up, notably the low-power TV application process. -- By the time they got around to issuing low-power TV licenses, the technology was obsolete because of cable."

The FCC apparently has few friends in this argument, as it is being attacked from the other side of the fence as well. A bill has been introduced in Congress by Rep. Michael G. Oxley, R-Ohio, to strip the FCC of its authority to issue the low-power licenses, and NAB president Edward O. Fritts has stated, "The FCC has turned its back on spectrum integrity. Every legitimate scientific study validates that additional interference will result from LPFM [low-power FM radio]. This FCC has chosen advancement of social engineering over spectrum integrity. It's a sad day for radio listeners."

Whether you buy that last claim depends on whether you believe commercial broadcasters are motivated to serve listeners or just to make money. Consider this comment from Scott Gillmore, vice president and market manager for LBJ-S, owner of five stations in Austin including KLBJ and KGSR.

Speaking only for himself and not expressing the official position of his company, Gillmore says, "We are concerned about it primarily because radio is trying, both commercially and noncommercially as currently licensed, to transition to digital broadcasting in the next several years," much like television has done, but without the additional spectrum space that TV received.

But, he adds, all the work that has been done so far on transitioning to the digital spectrum "is based on the current spaces of stations, and these [rules] basically will drop low-power stations that are closer to us than has previously been allowed. We're real concerned about interference problems from that."

In contrast, John L. Hanson, the interim general manager for public station KUT, says, "KUT doesn't have an official position on this decision, but my personal position is that as long as it doesn't interfere with existing stations, it could help diversity by going against the current trend of corporate conglomeration."

Today, Thursday, Feb. 17, at 2pm in UT's Hogg Auditorium, famed television journalist and UT alum Bill Moyers will be featured as part of the Texas Union's Distinguished Speakers series. Based on the excellent talk he and Walter Cronkite delivered at The Daily Texan's 100th birthday bash last year, expect him to provide insightful commentary on how profit-driven corporate domination of the world's media is choking off meaningful analysis and debate of society's crucial issues. Also, he likely will attack the myth of the "liberal media," showing how the media instead gives voice only to those viewpoints which serve corporate interests. Anyone interested in truly understanding the media should attend. Tickets are free.