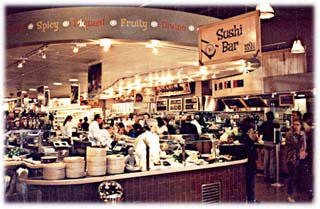 The new year started grimly for Whole Foods Markets and its CEO, John Mackey. Stock prices, which had plunged to a low of $28.25 a share back in March, were stuck below $45 (from a peak of more than $70 a year before) despite steadily climbing revenues and more than a dozen new store openings in 1999. Online grocery sales, which Whole Foods executives hoped would reach $4-6 million by March, continued to stagnate for retailers across the country, a fact which Mackey tacitly acknowledged when he decided to spin off the company's Web operations into a separate company. And competition between Whole Foods and its nearest competitor, Wild Oats Markets, grew more intense than ever, as Wild Oats edged past Whole Foods in total store locations, 111 to Whole Foods' 105. Still, Whole Foods execs put their bravest faces forward through the first weeks of January, launching a daring online venture and announcing a new wave of acquisitions designed to ensure their continued dominance of the $25billion natural foods market. Among the chain's aspirations: