A Century of Newsmakers 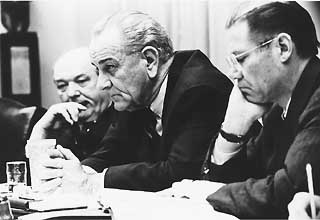 It's a perverse task, picking such a list, guaranteed to start arguments; our apologies to those short-listed folks -- from Frank McBee to Clifford Antone, Lloyd Doggett to Frank Erwin, Gonzalo Barrientos to Darrell Royal, Willie Kocurek to Sarah Weddington, not to mention those passed on, from Stevie Ray Vaughan to Madalyn Murray O'Hair to John Henry Faulk -- who, we decided, lurk further down in Austin's Hot 100 of the 1900s. The Top 10, we think, highlights people who are or were more than famous; they left lasting legacies to Austin itself, and their accomplishments (or sins) were not inevitable but genuine and unique. Here's our honor roll.

1. Lyndon Johnson. Duh. Austinites like to think their town is the center of the universe, but when LBJ was president it actually was. From his early career, which brought you the water you now drink, to his posthumous legacy, which gave us our No. 1 tourist attraction, Johnson gave Austin the sense of gravitas -- of being a place that matters on the national and world stage -- to which we are now accustomed. Plus, he gave us TV.

2. Michael Dell. We differ with Texas Monthly's assessment of Dell as the tycoon of the century for the entire state (after all, the story of Texas in the 20th century is spelled O-I-L), but his primacy among Austin's potentates is in no doubt. Because of Dell, and of the Silicon Hills boom that he symbolizes and helped spawn, Austin is no longer a branch-office town living off the table scraps of other Texas fortunes; we are now the center of the state's economic universe.

3. Willie Nelson. Willie is the Michael Dell of the other half of the New Austin; without him, we might have a music scene, but it would doubtlessly be different, since the kind of music Willie basically invented is what people came here to see and pay for and which still dominates the industry today. Plus, who better incarnates the central-city ethos and lifestyle? Compared to Willie, Matthew McConaughey is a wannabe. 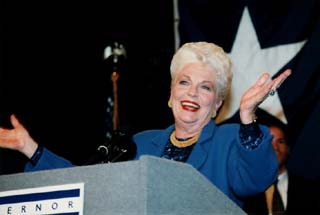 4. Tom Miller. There are really only a few mayors who matter when taking the long view of Austin's 20th-century history. Maybe Roy Butler, but he's done more out of office than he did in. Then there's Carole Keeton McClellan Rylander, but more on her later. That leaves Tom Miller, Austin's longest-serving mayor (in two different eras), under whom Austin first became a real (though small) city, and Central Texas a real (though minor) urban region. This is a mixed legacy in some eyes.

5. Ann Richards. Our only governor of the 20th century is second only to LBJ as a symbol of our political milieu, and her ascendancy from Travis County commissioner to worldwide celebrity embodied the conversion of the Texas Democratic Party into an extension of Austin public life. Which is probably not a good thing for anybody but us, but center-left politics is one of our cash crops, and Ann Richards is the Michael Dell of that industry.

6. Jake Pickle. It's easy to mock Double-J as the consummate pol because all his accomplishments are on the surface. But accomplishments they nonetheless are; the bags of sugar and slabs of bacon brought to Austin from Washington -- from UT's research program to the air force base-cum-airport -- are key girders in the structure of our civic life, and they wouldn't have happened if we didn't have Mr. Inside to make them happen.

7. Gus Garcia and Wilhelmina Delco. Gus is still part of the furniture, but we feel he and Delco well represent the political empowerment of Austinites of color in the latter quarter of the century, in that both of them, by the end of their long careers, had accrued a record of civic accomplishment that far transcended their supposed ethnic-only mandate. As well, both of them left a legacy of insightful leadership at AISD that every board since has managed to profane.

8. Barbara Jordan. As much as we admire Jordan, we weren't sure her contributions to Austin as opposed to Houston or to the nation were of Top 10 merit. But that uncertainty is the point; we bend over backward to claim Jordan as an Austinite, and for good reason. Others who basically lived ordinary lives in Austin have walked the national stage, but none is as obvious a role model and guiding spirit to today's community.

9. Lady Bird Johnson. Does Lady Bird deserve to be here on her own? We think so. After all, LBJ's been gone for more than 25 years, but the Johnson family is still making things happen in Austin, thanks to Lady Bird. From the Town Lake Trail to the wildflower center to the Brown Building to the radio dial, we see evidence that "LBJ" doesn't just stand for Lyndon.

10. Charles Whitman. As awful as it sounds, our feelings about Whitman are sorta like those about Barbara Jordan -- as big a deal as the Tower shootings were, did they really make a difference in our town's life? What does it mean that Austin "lost its innocence" in 1965? But everyone knows who Charles Whitman was, and everyone thinks of him when they look at the Tower, so we figure that, though we don t know how to quantify it, his influence on Austin's dark background noise is real.