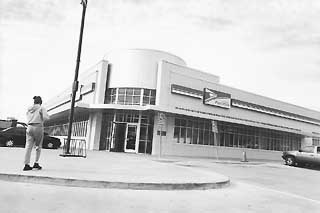 Some architects point to the downtown post office as an example of what not to do. (Photo By John Anderson)

Just over two years ago, when the City Council embarked on Version 1.0 of its Downtown Initiative, one of the package's many features was a charge to the city's long-in-place but largely dormant Design Commission to "prepare draft design guidelines for the city's downtown region within 60 days" that would "exemplify ideals such as a pedestrian and bicycle mobility and urban core vitality expressed through past Council actions, previous planning studies (and) community consensus building exercises." Since November 1997, of course, the Downtown Initiative has gone through several, uh, updates ("Now bundled with CSC!" "Now part of the Smart Growth Suite!"), and the design guidelines seemed like yet another worthy, quixotic production of the City of Ideas, destined for the groaning shelves holding all those previous studies and exercises. The draft document itself refers to its contents as "yet another set of directives." The fact that it took not two but 17 months to produce the draft guidelines, released for public comment last April, and the fact that public hearings on the draft weren't held until last month, added to the project's faint DOA smell.

Then came the Gotham condo project on Town Lake, which bore the downtown design guidelines -- or, more aptly, the need for guidelines -- up into the spotlight atop its ludicrous towering faux-Corinthian columns. (If only the Gotham played Gothic instead of Greek; it could have been an homage rather than a drag parody.) It also illuminated the Design Commission, which actually got to have its (caustic) say on that marquee project, and the pipe leading toward real design review of such projects has been greased. So, now that the guidelines matter, people are paying attention to what they say.

They say a lot. The guidelines are rooted in a set of nine "shared values," including a sense of history, unique character, authenticity (so lavishly transgressed by the Gotham), safety, diversity, humane character, density, sustainability, economic vitality, and civic art. From these values are spawned the eighteen goals for the guidelines, ranging from "Promote an intuitive understanding of the layout of Downtown Austin" to "Reinforce the sense that Downtown belongs to everyone" to "Encourage public and private investment in the future of Downtown Austin" to "Maintain a sense of connection to the natural environment."

And that's just the starting point. The guidelines proper, which in the draft version number 44 and are grouped into area-wide, streetscape, plaza, and building recommendations, contain the operational detail that city staff and developers say they need to put any grand Austinvision into practice. And these are only the guidelines that the commission hopes to apply to the "Downtown Core." The group also suggests the adoption of 11 districts around the core -- including Shoal and Waller creeks, the South Congress and South First corridors, Rainey Street, various Eastside corridors, buffer zones on downtown's west side, and Town Lake Park.

In each of these districts, some or all of the main 44 guidelines would apply, often in amended versions, and new guidelines would often be added. For example, the Waller Creek district guidelines include exhortations to "provide a natural creek bottom" and dispensation for developers to "carve and shape creek banks to allow public access by, to and through projects."

The commission acknowledges that its district guidelines are more provisional, depending on things like neighborhood planning, and in several cases (Rainey Street, Town Lake Park) the guidelines simply refer back to previous plans. For an example of the Downtown Core guidelines that are the project's raison d'être, take draft guideline AW.9 -- "Acknowledge that rooftops are seen from other buildings and the street."

Each guideline contains an "issue" summary, which in this case talks about how rooftop service equipment is unsightly and spoils the views; references the relevant values, in this case "humane character" and "economic vitality"; and contains recommendations of varying specificity, here calling for equipment to be screened and removed when no longer used.

That's a fairly common-sense, though to some sentiments doubtlessly picayunish, guideline. More squishy are things like AW.7, "Avoid historical misrepresentation." The example given of what not to do is Santa Fe's requirement that new buildings look like they're made of adobe, even though they're not (usually, they're coated with mud-like plastic), which makes the unwary think they're older than they're really are.

The violation of this guideline was originally cited by the Design Commission in its savaging of the Gotham, but was later stripped after debate that the commission was, in expressing its dislike for those damn columns, simply legislating taste. That will strike some of you as being perfectly reasonable where the downtown skyline is concerned, but rare is the opinion leader brave enough to say Austin should have a certain "look," even if it means tolerating fashion don'ts that no city should be forced to witness.

But as we are all well to know, "design" is not the same as "aesthetics." Even though the Design Commission asks, as part of the guidelines, that its legal mandate be revised "to reflect the duties for guideline maintenance, guideline overview, and planning for new guideline districts," it does not go so far as to advocate that design review by the commission be part of every project's regular development process. Many cities do exactly this, of course, but not in Texas.

Rather, the commission envisions the guidelines being reviewed by city staff and the council to see which ones can be made part of the Land Development Code, which ones are best left as "policy considerations," and which can be tied to incentive packages (such as the bonuses for projects that score high on the Smart Growth Matrix). That is effectively where we are now; even though the guidelines as a whole have not been finalized and formally presented to council, as the Gotham example shows, they're already become a real, if tricky, enhancement of Downtown Initiative 2000.