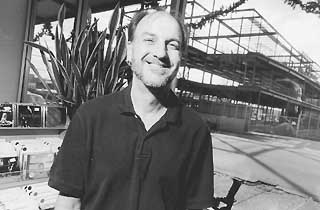 Years ago, you could stand inside Waterloo

Records and look out across a dingy row of low-slung buildings to a skyline that neatly defined Austin, Texas, circa 1989. John Kunz had just moved his record store to the newly renovated little shopping center at Sixth and Lamar, and the neighborhood of car lots and salesmen in pointy-toed cowboy boots was starting to grow on him. He liked walking up the street to the Sweetish Hill Bakery for coffee and pastries, and, over the years, he admired how Wiggy's, the neighborhood stop for a nice bottle of wine or a pint of Jack, matured into a thriving enterprise. There were a lot of things Kunz liked about Sixth and Lamar, but the view of the skyline, now that was sweet. Eventually, though, the vista went the way of Capitol Chevrolet's used trucks across the street. The open-air lot was replaced by the tall, modern limestone building that houses Whole Foods' flagship store and BookPeople, and that building's top-floor offices commanded a pretty nifty view of downtown -- until GSD&M obscured the picture when it built its big "Idea City" next door (flood plain be damned), on the site of the old McMorris Ford dealership. The last person to inhabit the McMorris site before a wrecking ball took it down was former mayor Bruce Todd, who ran a bruising re-election campaign out of the vacant showroom that peered out through a dusty plate glass window onto West Sixth Street.

Anyway, the domino effect of the diminishing skyline is how Kunz explains Sixth and Lamar's rise in popularity over the last decade as the car dealerships and body shops picked up one by one and migrated south to a new settlement on the I-35 frontage road. This shift in the wind was due in large measure to two people: former mayor Roy Butler, who sold off a bunch of his property where car lots and tumble-down buildings once stood, and Scott Young, who got his start with Roger Joseph developing the 600 Lamar shopping center and then went on to swing the Whole Foods and GSD&M deals.

"Scott Young is the father of Sixth and Lamar -- and I'm the grandfather," proclaims Butler, an old-school wheeler-dealer who's had his hand in this neighborhood's properties since the Fifties. "Sixth and Lamar," Butler explains, "used to be a scrubby strip of used cars leaking oil and antifreeze. Now it's turned around 180 degrees, and it's beautiful."

In a longer view, the intensity of activity in this southwest downtown neighborhood is but one example of how Austin has crawled out of the empty pockets of the Eighties to rebound with a vengeance in the Nineties. Now the suburbs are passé; downtown is the darling of developers eager to capitalize on the city's commitment to turn the Central Business District into a 24-hour downtown. "A new building in the suburbs looks like any other building in any other suburb," says developer Tom Stacy. "But if you do a building on Congress Avenue in Austin, Texas, that's a meaningful and very fulfilling experience."

Today, every downtown neighborhood -- from Sixth and Lamar, to the West End/Warehouse District, to Congress Avenue, to the Convention Center, has a construction project under way, or is poised to see a project break ground soon after the new year (see p.26). Clearly, these are heady times for Austin -- wallet and spirit. Consider the current state of affairs:

Affordable housing downtown? Forget about it. The new condos and apartments going up are targeting the $60,000 to $100,000-plus income market.