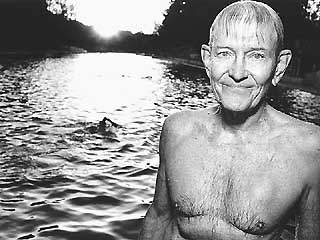 If there could ever be a human soul that matched the beauty of Barton Springs, it was Beverly Sheffield. Sheffield spent a lifetime caring for our wondrous pool. He started working as the director of Austin Aquatics in 1935, went on to run the Parks and Recreation Department until 1973, and stayed active in Austin parks and civic issues the rest of his life. His list of successful endeavors to improve Austin's quality of life, and create the Austin we know and love today, is virtually endless. He helped map out our tremendous park system and made sure it sparkled with so many pools. He was also a major force behind the Town Lake Hike and Bike Trail, the Zilker Hillside Theatre (re-named after Sheffield in 1997), and many improvements to Barton Springs. Sheffield received about every civic award given in Austin and was nationally recognized in the field of recreation.

Sheffield also had one important event in his life at the pool -- an almost tragic turn -- that changed him forever. On an August day in 1962, he was working an annual party where hundreds of Springs devotees, along with the City Council, celebrated the birthday of Charlie Morrison, the gregarious "mayor" of Barton Springs. In a rare break from his busy schedule, and at the crowd's insistence, Sheffield joined the party in the pool to swim the traditional lap. But he almost didn't make it out of the water. In an irony that never escaped him, Austin's recreational visionary swam a few hundred feet and realized something was very wrong. This overachiever had, as he confided many years later, lost touch with his physical well-being during his middle years. His plight unnoticed by everyone, too weak to call out for help, Sheffield struggled back to the diving board and collapsed on the sidewalk.

As he recovered, Sheffield made a vow to turn his physical life around. He kept that vow by swimming in Barton Springs for the rest of his life. At the age of 50, he set a goal of swimming the distance from New York to Los Angeles: 2,820 miles. Over the course of 36 years (and two pacemakers), he not only completed that goal, but swam well beyond it.

Sheffield's signature smile showed the rewards of a job well done, a life well-lived, and a community well-served. And in his smile one could see something more -- the mark of a man who was lucky enough to rekindle the spirit of his youth in his later years.

Somewhere, in a watery place, there is a man still swimming, and smiling while he does it. That man is Beverly Sheffield.