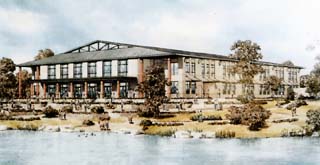 Northwest Austin's Quarry Lake, a pristine, spring-fed fishing hole surrounded by 58 acres of parkland, trees, and jogging trails, is an oasis of natural beauty at the nexus of five suburban neighborhoods. Residents there say that plans by Hyde Park Baptist Church to develop the land into a massive community center for church members will destroy the park's picturesque, isolated quality -- not to mention increasing traffic, creating noise, and potentially contaminating water in the Walnut Creek watershed, which neighbors say has already been damaged by overdevelopment.

Although church leaders say they aren't trying to anger neighbors with their plans for the Quarries -- which include a 60,000-square-foot gymnasium (the so-called "Christian Life Center"), a 250-child day care, a 600-student high school, a senior activity center, and an adult day care center -- neighborhood groups aren't taking any chances. Banded together as Five Neighborhoods United, an umbrella group for residents who would be affected by the development, Quarries neighbors are taking their campaign to stop the church to the City Council, the Planning Commission, and even the Texas Department of Transportation. 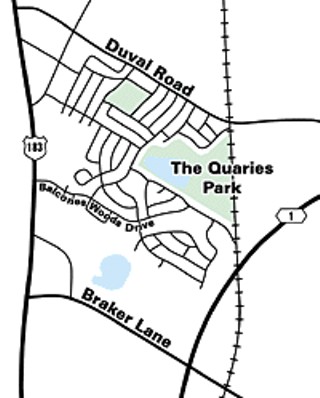 Neighbors worry that massive development at the Quarries will destroy the serene quality of the area, and dump traffic onto the neighborhood streets surrounding the project.

At a community meeting last Wednesday that drew about 100 residents, neighborhood leaders outlined their plan of attack. Neighbors' first potential line of defense, Balcones Woods Neighborhood Association representative Bob Pipe said, is the Planning Commission, which must approve a conditional use permit before the church can build its high school, parking lots, and daycare facilities. Since the Quarries area is currently zoned for single-family use, Pipe said, the church would have to severely restrict the density of its development in order to keep traffic at a reasonable level of around 1,200 daily trips; under existing plans, according to NA representatives, the Quarries would dump several times that many cars onto streets in the Balcones Woods and Mesa Park neighborhoods.

Currently, the Quarries' only direct access roads to MoPac are Duval Road and Braker Lane; church plans call for building a private road on the right-of-way parallel to the Union Pacific tracks, which neighbors fear will result in increased traffic on Balcones Woods Drive, which would abut the proposed access road. Mesa Park NA president Bobbi Henley says neighbors also fear that if commuter rail is approved along the MoPac rail line, the church would lose its access to MoPac, forcing Quarries traffic onto neighborhood streets. Henley says neighbors will request a public hearing with TxDOT before the new roadway is approved.

Why such an uproar over a development neighbors knew was coming as many as 15 years ago? For one thing, neighbors say, the plans have changed at least three times from their original form, which called for a community recreation center surrounded by ballfields and parkland. For another, residents say they won't be able to use the facilities, with the exception of the jogging trails, without paying a fee, despite the fact that the church's current conditional use permit (which will have to be re-approved if the gymnasium is to be built) calls for "community," not private, recreational use of the land. Most importantly, Henley pointed out at the meeting, approval of the development would set a dangerous precedent for future church development in neighborhoods throughout Austin. "This kind of development has happened over and over again..." Henley said. "That's why we need to get together and keep the fires under the Planning Commission and City Council: to make sure development of this sort does not occur in our neighborhood or the Hyde Park neighborhood," where the church has planned a massive expansion project.

The Planning Commission is expected to discuss approval of the Quarries project some time in early January.