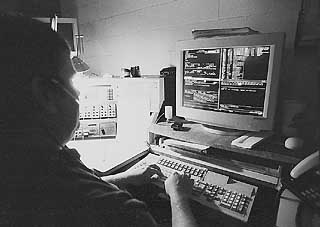 With the city's outmoded communication system, radio dispatchers serve as the only link between police officers and other emergency crews. (Photo By Jana Birchum)

More than two and a half years after Austin voters approved $38 million in bonds toward the purchase of a new emergency radio system, the network -- which was sold to voters with the promise of being fully operational by 1999 -- is still at least three years away from installation. One might think that purchasing a new radio system to allow local law enforcement officers, firefighters, and emergency medical personnel to communicate with one another would be a relatively simple task. But in the time it has taken local officials to organize a coalition in 1994, vote on the measure in 1997, write and disseminate a 1,500-page Request for Proposals (RFP) in 1998, and hear oral presentations from bidders in late 1999, other Texas cities have already designed, procured, and implemented similar "trunking systems" -- a single radio channel used by mobile units. The long-running process in Austin has taken on an obscure life of its own due to a combination of factors: