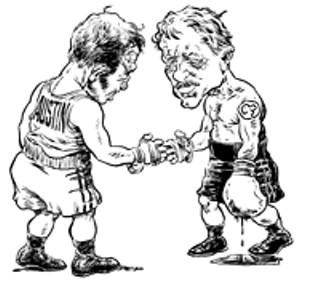 News flash: Gary Bradley and the city of Austin bury the hatchet; Bradley's 3,000-plus acres to be developed under SOS impervious cover standards; Bradley will adhere to all city water quality regulations henceforth, even if water quality protection zones are upheld by the Texas Supreme Court. Sound too good to be true? Maybe it is, but time will tell. If the "Terms Sheet" signed last week by Bradley and an attorney representing the city is translated into a final agreement, and if the agreement is tight enough to withstand any attempts Bradley might make to renege, it could lead to a dismissal of litigation pending between Bradley and the city. What's more, it would put a limit on the damage done by the passage of HB 1704 -- which allowed developers to build under the less restrictive water quality regulations that were in place when they first filed site plans -- since Bradley controls perhaps as much as 75-80% of the land affected by 1704.

This may all come to pass, or it may not. There are questions about whether the structural controls built into the deal -- which will be stricter than what's allowed under 1704, but less strict than SOS -- will be enough to protect water quality. And there is still ambivalence about the mitigation concept within the environmental community. Some still oppose "go forward" mitigation for developments that are subject to current water quality regulations -- as exemplified by the Forum PUD development -- as undesirable end-runs around the SOS ordinance. (Off the record, some who supported the Forum in Southwest Austin have wondered whether their support was a mistake, a too-big compromise designed to buy influence at the Legislature that, as it turned out, wasn't for sale at that price.)

A Deal With the Devil?

Council Member Daryl Slusher started with a presentation, complete with visual aids, on the city's tortured history of thwarted efforts to protect the environment. The council chamber briefly became a classroom as he told the oft-repeated tale of the Comprehensive Watershed Ordinance and its 86% exemption rate; of the delayed SOS Ordinance election that allowed hundreds of "old rules" site plans to be filed; and of the jeopardy our water quality is still in today.

Mayor Watson followed Slusher with a long and thoughtful meditation on our city and its economic future. He talked about the manifold achievements of 1990s city government in proving that environmental protection and economic development are simpatico, and outlined the city's efforts to exercise reasonable local control over its economic and environmental destiny. Though he was disappointed in the Legislature's rejection of Austin's efforts, Watson said, the Lege has made its meaning clear, and Austin shouldn't further aggravate lawmakers by seeking to overturn 1704 in court. Keep up the good consensus building, he said, and don't poke the not-so-sleeping monster living in the Capitol.

Indeed, Watson's speech seemed to be addressed as much to legislators as it was to his assembled audience. It was for their benefit, likely, that he chided those environmentalists who are "blinded by an almost fundamentalist zeal, who have fought so long that they -- think it better to fight and go down in flames than deal with the devil, even if it arguably gives greater possible protection." Watson called developers to task, too, arguing that the ever-growing economy should prompt them to give something back and to help preserve the community that has contributed to their prosperity.

SOS Board Chair Robin Rather said she is pleased with the process the Bradley settlement is undergoing, as it represents another credible effort toward local control by Austinites. As Watson pointed out in his comments, state leaders are inconsistent in their choice of when to support local control and when to supercede it. Rather added that legislators are steadfast in supporting "local control in education, but I never did understand why that doesn't extend to the environment."

Rather said SOS will not issue a position on the settlement until the review team they have assembled has a chance to study it in detail. "We're taking the proposal very seriously," she said. "What we were given last week is not sufficient to make a decision. We may or may not have a proposal everybody can buy into. Is it worth a try? Absolutely."

Talk about anticlimactic. In a council chamber filled with interested citizens, including a sizable contingent wielding anti-Gotham signs and the South Austin Gospel Choir, which planned to sing in opposition to the project, the Austin City Council postponed consideration of the Gotham condominium project until Dec. 9.

In the hours before the vote, nobody knew how it was going to go down. Though Mayor Kirk Watson and Council Member Gus Garcia had shown no signs that their support for the project had wavered, Bill Spelman by his own admission was waffling. Willie Lewis laid low. Slusher and Beverly Griffith signaled their continued opposition by distributing a memo citing Ray Reece, Jean Mather, and Roy Mann, some of the architects of the original Town Lake Corridor Study, on why the Gotham is a violation of the principles outlined therein. Conspicuous by the absence of her name from the memo was Mayor Pro Tem Jackie Goodman, who, herself a participant in the Town Lake Corridor Study, would be equally qualified to comment on the study's (and therefore the Waterfront Overlay's) "intent."

Among Gotham opponents, the intent of this group of Austinites is being scrutinized like that of the framers of the U.S. Constitution, with similar levels of disagreement about what the thing actually says. It was because she wanted to more fully ponder that intent, and what the council's current position on waterfront development should be, that Goodman said she supported the delay, which was originally requested by Spelman.

In the meantime, according to Randall Davis' representative Richard Suttle, the Houston developer is tweaking the Gotham design to respond to the criticisms of the project by the city's design commission. Possible changes include adding features to make the building more pedestrian-friendly on the ground floor, such as landscaping and awnings. Suttle said Davis is also thinking about providing a public access to the hike and bike trail from the Congress Avenue bridge on the property. Suttle refuted the rumor that Davis might attempt a land swap with the Hyatt (next door to the Gotham), giving the big hotel the Congress-and-the-river tract and moving to the hotel's west side. "We're not doing that," he said.

The amphitheater at Southpark Meadows in South Austin got its zoning, over the objections of neighbors who are still worried about the effects of the thing on the neighborhood. Residents implored the council to grant a postponement, over the vociferous objections of attorney Richard Suttle, who warned that his client, Universal Concerts, might balk at the project if they didn't get their zoning approved post haste. "If we postpone, the message will be sent that Austin may or may not want the amphitheater," he said. "I've got four guys who flew in here from California, because up until 10 minutes ago, [we believed] that this was going to be okay."

Suttle said that Universal was fully prepared to answer the concerns of the neighborhood, but that the specific matters under discussion were appropriate for the Conditional Use Permit (CUP) process, not the zoning process. Give us the zoning, he argued, and we'll make good on our promises when we negotiate the CUP.

Griffith said she'd rather wait, implying that she might not be persuaded to approve the project at all, and zoning would be as good a place to stop it as any. Voting with Griffith to delay the zoning approval were Council Members Lewis and Garcia, but the coalition of Spelman, Slusher, Goodman, and Mayor Watson prevailed.

Elephants are People Too

The council approved a Seaholm Power Plant item on consent, calling for the city manager to develop a prospectus and send out a Request for Qualifications to those interested in rehabilitating the Austin landmark. Council also extended the deadline of the Police Oversight Focus Group's final report to the council, to March 15.

Citizens' communication time yielded a large handful of articulate elephant supporters, who urged the council to adopt an ordinance banning live animal acts (i.e., circuses) inside the city limits. A representative of the Austin Zoo presented one of the more interesting reasons to support the ordinance. Hard as it might be to believe, Jason Neugent of the Austin Zoo said that such animal acts give people the idea to adopt exotic animals, like big cats, as pets. When they can't or won't care for them, he said, the animals ultimately end up in refuges such as the Austin Zoo. Council took no action, but expect this issue to surface again.

This Week in Council: Add one more thing to your list of things to be thankful for: The Austin City Council will not meet this week. The next meeting is Dec. 2. Much will be decided.